The UOB PRVI Pay webpage may be down, but the facility is still available, allowing you to buy unlimited miles at 2 cents each.

In July last year I wrote about the newly-launched UOB PRVI Pay facility which allowed PRVI Miles cardholders to buy as many miles as they wanted at 2 cents each. 2 cents is of course not the cheapest price at which you can buy miles, but what is unique about this facility is that it lets you buy unlimited miles. Other options like tax payment facilities let you buy miles at less than 2 cents, but you’re limited by the amount of your tax bill.

Early this year I started getting questions from a few readers about whether the PRVI Pay facility was still available. UOB had removed the application form from their webpage and the URL for the facility was now redirecting to the home page.

I heard anecdotal evidence from others that the PRVI Pay facility was still alive and well, but the signs looked ominous. I eventually decided to reach out to UOB directly to find out what was going on. The results were…interesting.

My first message to them was answered 2 days later with an emphatic “no, it’s dead”. 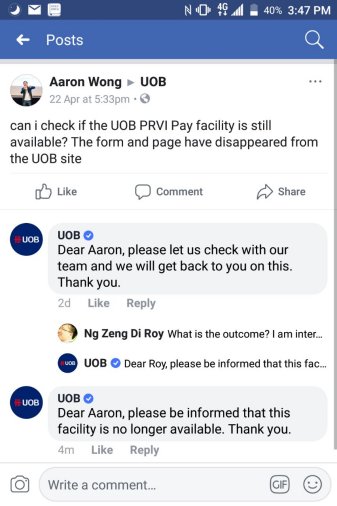 But then shortly after this they updated their response and asked for a callback number. 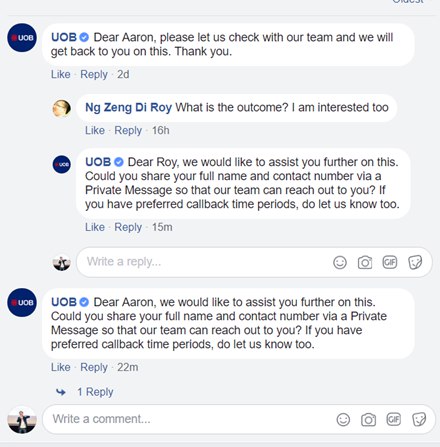 This morning I received a call from the CSO telling me that the PRVI Pay facility was alive and well, and they’d email me a copy of the application form. The CSO didn’t know why the webpage for PRVI Pay was down, and suggested it was routine maintenance (which I doubt given it’s been the case for so long).

I’ll upload a copy of the form when it gets to me, but all you need to know is that PRVI Pay is still available, and you can get all the miles you need (KrisFlyer or Asia Miles)  at 2 cents each indefinitely.

Edit: Here’s a copy of the application form

Aaron Wong
Aaron founded The Milelion with the intention of helping people travel better for less and impressing chiobu. He was 50% successful.
Previous articleWorld of Hyatt offering 40% bonus on points purchases, get luxury stays for less
Next articleReview: Conrad Hong Kong

The HSBC Revolution gets a major makeover in August. How will it compare to the time-tested UOB Preferred Platinum Visa?
Read more

From now till 31 August, DBS Altitude cardholders can earn up to 4 mpd on online and offline shopping- but it's too much complication for too little payoff.
Read more

That’s why I printed loads of forms previously. Still got a stash of them in my drawer. Haha!

I applied twice – once in Feb, another in March.
No response. No deduction from CC. Called CSO, promised to check and revert. No callback.
Seems dead to me.

thanks! why does UOB ask for bank account details? shouldn’t the amount be charged to my UOB CC?
update: okok – i get it. they transfer the amt to my designated bank acct and i get charged thru to my CC.

May i ask , how do you get 2 cpm from the above calculation ?

I applied about 5 times last year and successful in getting tons of miles. However, after I transferred all my miles to KF, UOB has rejected all my subsequent 3 applications. In the end, I have to give up applying lol

Hey guys, I just called UOB for the PRVI payment facility and they said its on hold until 15 May 2018. A new set of requests form will be out along with a new website.

Firstly, thanks for sharing your learnings.

I am looking to purchase Uni$ via my Priv Miles Payment Facility. I am looking at 100k KF Miles = Uni$ 50k. The UOB CSO shared with me that i will need to take a loan amount of $100k @ 2% (1-time charge) to earn the Uni$ 50k. This differs from the $0.02/mile conversion unless i am mistaken. either that or i must have misunderstood the CSO.

For your kind adv pls.