SQ21/22 is returning, with a two-cabin business and premium economy class configuration.

Singapore Airlines announced today that it will resume the world’s longest flight between Singapore and Newark (EWR) airport on 11 October 2018. The 18 hour 45 minutes, 16,700 km non-stop route will be operated by the ultra-long range Airbus A350-900ULR, which SQ will first take delivery of in September 2018.

9V-SGA will be the first aircraft to fly this route, which also inherits the flight numbers SQ21/22 that the previous non-stop EWR service had before it was cancelled in November 2013. Initial service will be 3 times a week, departing SIN on Monday, Thursday and Saturday.

However, you’ll only have to wait a week before the route goes daily on 18 October when SQ takes delivery of a second A350-900ULR, after which the schedule will look something like this: 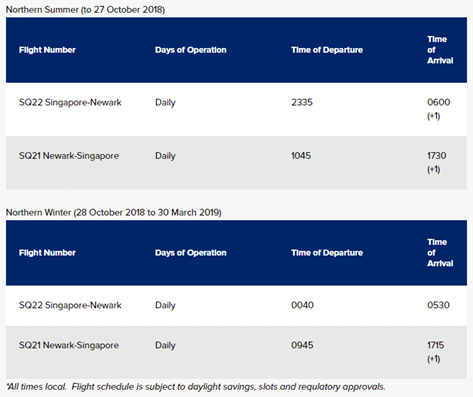 The outbound flight to EWR seems to be more suited to the business traveler, with a late night departure from Singapore and an early morning arrival into New York, preserving the entire day for work. The return flight however gets you into Singapore past 5 pm local time, somewhat less ideal. Swings and roundabouts, I suppose.

SQ has opted to resume service to Newark instead of adding a second service to JFK. The existing one-stop SQ25/26 route via FRA will remain even after the launch of the non-stop flight.

I’ve flown into both Newark and JFK, and based on my experiences Newark is much better if you’re taking public transportation. That’s because Newark is directly connected to Penn Station in Manhattan via the NJ Transit train, which should get you there for about US$12.50 within 30 minutes. If you’re flying into JFK, you’ll have to take the subway into Manhattan which costs US$7.75, but takes up to 90 minutes thanks to the numerous stops.

By car, you’re roughly indifferent between JFK and EWR. EWR is slightly more convenient if you’re on the West side of Manhattan and JFK if you’re on the East. The fare quotes on Uber come out slightly cheaper for EWR, but again it depends where in Manhattan you’re intending to stay (for the purposes of this article I am assuming that people only stay in Manhattan, Brooklyn hipsters be damned). 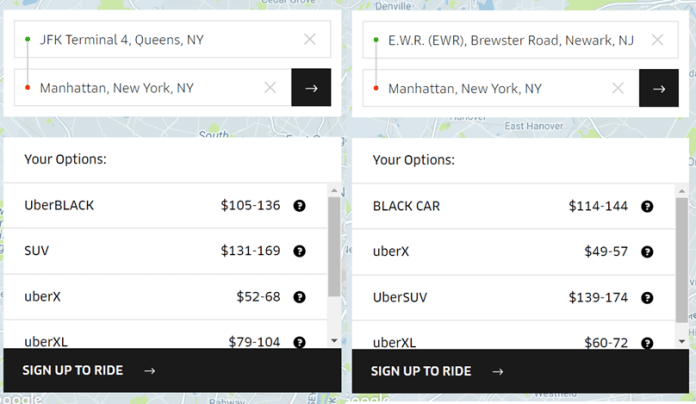 The other relevant point to remember is that SQ’s Star Alliance partner United operates out of EWR exclusively, having abandoned JFK back in 2015 (a decision they now deeply regret). SQ and UA don’t see eye to eye on a lot of things, but you’ll at least be able to get additional connectivity options to other US destinations out of EWR.

Business Class and Premium Economy Only

As rumoured earlier, Singapore Airlines will be opting for a two-class configuration on the A350-900ULR. However, instead of the standard business and economy cabins you might find on other two-cabin SQ aircraft, SQ21/22 will have 67 business and 94 premium economy seats only.

One school of thought says that it’s inhumane to make people sit in economy for a 19 hour flight. Another says that a flight like this will not be able to operate economically without a high yield cabin layout, and since no one really pays for first class anymore, business and premium economy is the way to go.

Besides, I’m sure there are fuel burn considerations that limit the number of passengers that can be carried, so a full economy class cabin might not work anyway (remember that SQ’s current business/economy configured non-stop flight to San Francisco has to limit the number of seats it sells during certain times of the year due to jetstreams causing higher fuel burn).

There was some speculation as to whether SQ would use its new 2017 A380 business class seat on this aircraft, or stick with the 2013 version the other A350s have. We now know that the airline has opted for the latter, which I suppose makes sense given the A350 cabin is slightly narrower than the A380’s upper deck. Although this seat has its share of detractors, I personally find it extremely comfortable and have no complaints.

Veterans of the old SQ21/22 route will remember that SQ eventually converted the route into an all-business class layout after starting off with business class and so-called executive economy. I’d be interested to see what happens here, but SQ is obviously hoping that there will be a sufficient critical mass to justify offering premium economy as well.

Award Space availability is unknown for now, but expect to pay Advantage rates

I imagine award space will go live when the flight goes up for commercial sale tomorrow. I’d be very interested to see what kind of availability there is, but my gut tells me that Business Saver awards will be close to impossible to get on SQ21/22. I do think we’ll see Advantage awards available for waitlist on certain days (maybe even immediate confirmation during low peak periods, insofar as these exist on the SIN-EWR route), but again my gut tells me these will be few and far between. Let’s see.

As a reminder, a one-way award seat between Singapore and New York City will cost you

We know that Los Angeles should be the next non-stop destination for SQ once it receives additional ULRs. As per the boffins who track such things, the airline expects to receive 7 A350-900 ULRs by the time 2018 is done which will be more than sufficient to serve both LAX and EWR daily.

But what’s more intriguing to me is the as yet unannounced new North America destination. I’ve heard rumours of Seattle, Chicago and even Toronto, but your guess is as good as mine now. I’m just going to come out and put my money on non-stop service to Columbia, South Carolina. I hear that route is missing a Star Alliance carrier ever since United pulled out...

I never had a chance to fly on the old SQ21/22, but I’m really looking forward to do a trip report when the route relaunches. Here’s hoping award seats will be available!

Let’s hope saver awards would be more readily available on SQ 25/26 after this launch especially in Suites.

I know it’s not really miles related but https://en.m.wikipedia.org/wiki/Vis-à-vis

[…] Singapore Airlines has just announced that non-stop flights from Singapore to Los Angeles will begin operating from 2 November 2018 onward. This non-stop flight will be operated using their brand new Airbus A350-900 Ultra Long Range (ULR) aircraft which will also be deployed for non-stop flights to Newark come October 2018.  […]

[…] Earlier in the year, Singapore Airlines took delivery of the world’s first Boeing 787-10 Dreamliner aircraft and in late September 2018, it will take delivery of its first Airbus A350-900ULR.  […]

The Longest Flight in the World: Trip Planning – The MileLion

[…] promise to make non-stop fights to the USA profitable once more. On 30 May, Singapore Airlines announced the resumption of non-stop flights to Newark. On 24 September, the airline took delivery of the first of seven A350-900 ULRs. On 11 […]