Rumour: KrisFlyer’s mobile wallet to be called KrisPay, Esso to be launch partner

KrisFlyer's digital blockchain wallet looks set to be a QR-code enabled solution called KrisPay. Read on to see what else has come to light.

Back in February Singapore Airlines announced that it was planning to launch a blockchain-based airline loyalty digital wallet that would allow KrisFlyer members to spend their miles at everyday retail partners. A proof-of-concept exercise was carried out with KPMG Digital Village and Microsoft, and the program is currently undergoing further field testing with the goal of launching by August.

I’m all for having more ways of using miles, but as I noted in my analysis, the move was slightly worrying because it represents a step in the miles-as-money direction, something the US airlines did a while back (you can already use your miles to pay for coffee or a bagel in some United hubs). Such use cases tend to represent very poor value for miles.

Well, as we move closer to the targeted August launch date, more details about the proposed digital wallet have leaked. A couple of friends who work at KPMG have sent me a copy of the circular that went out to all staff on the intranet asking for volunteers:

We are currently working closely with Singapore Airlines to build and launch a new KrisPay product which is a mobile wallet for KrisFlyer members to use their miles for everyday spend at merchants.

We will be doing a market launch very soon and in preparation for this, we will be working with SIA and ESSO to pilot this with a privileged group of KrisFlyer members.

We are seeking 15 lucky KrisFlyer members from KPMG who will be one of the first in Singapore to be part of this exciting journey (miles will of course be given to you as well!)

Who are we looking for?

What will you be doing?

(To avoid causing inconvenience to the actual field testing, I’ve redacted the dates and locations of the test. They’re not that important in the grand scheme of things anyway)

What does this tell us?

As expected, the circular itself is light on detail, but it seems the name has been all but decided: KrisPay. The name makes sense (I had my money on KrisWallet), and I can see that krispay.com has already been registered and reserved by Singapore Airlines. That’s a shame, because I was looking forward to domain squatting. 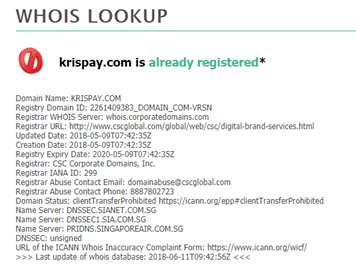 We also now know that KrisPay will be a QR-code based solution, similar to GrabPay, FavePay, LiquidPay and numerous other providers. I’m not a fan of QR-codes because they’re fairly finicky to use (find app, open app, align and hope the lighting is good enough), lack interoperability (although this is being worked on) and have security concerns (in 2017 there was a spate of thefts in China involving fraudulent QR codes that infected phones with viruses). They’re basically a circa 1994 technology that’s for some reason still around today.

I’d much prefer the convenience of NFC (which Dash uses), but to be fair virtually every phone has a camera while not every phone is NFC-enabled. Besides, NFC solutions have their own limitations as well, such as requiring the installation of POS terminals.

We also now know that Esso is going to be a launch merchant. Again, this make sense given that Esso Smiles is already a conversion partner with KrisFlyer, so there’s some sort of pre-existing relationship there.

Finally, it’s good to know that both iOS and Android versions are being tested, and hopefully they’ll launch at the same time because it seems like Apple users always get the new shiny toys first.

What don’t we know?

Pretty much everything else. The big question mark for me will be around miles valuation– just how much will a KrisFlyer mile be worth under this new system? I’m going to come out and say that my hunch is the value will not be constant across merchants.

It’s no secret that payments per se will not be an end in itself for KrisPay. The idea is not only to provide another payment medium, but to build an ecosystem of merchants that use the KrisPay platform to attract new customers, and also to give KrisFlyer members more opportunities to use their miles at popular merchants.

That’s to say, if Merchant A is already fairly popular and KrisFlyer wants to partner up with them, your miles might command a lower value when spent at Merchant A. On the other hand, if Merchant B is not very popular and stands to gain from increased exposure through partnering with KrisPay, your miles might command a higher value at Merchant B. We see the same dynamic with Mileslife, where restaurants which need more love offer 3 mpd rates, and those which are doing just fine offer lower rates.

I think it is safe to say that your miles are very unlikely to command a valuation of more than 1 cent each- that’s the price at which KrisFlyer implicitly trades money for miles at on their site with the Pay with Miles option. In fact, 1 cent is probably way too high- my maximum valuation guesstimate is closer to the 0.7-0.8 cents mark, with certain merchants below that. We’ll know soon enough.

This has implications for how you play the miles game- if you’re someone who regularly buys miles through any of the options available on the market, you’ll of course want to steer clear of KrisPay- it simply doesn’t make sense to buy miles at 1.5-2 cents and liquidate them below that. If however you’re someone who flies very occasionally and has a soon-to-expire small balance with no travel plans on the horizon, then KrisPay would be useful to you.

My reservations about this whole shift to miles-as-money remains, but to the extent that the launch of KrisPay doesn’t mean a medium term shift towards further KrisFlyer devaluations, I’m cool with it. In my opinion, the best use of miles continues to be award flights, but there are some people who will welcome the opportunity to spend their miles elsewhere and for them, August should be pretty exciting.

Aaron Wong
Aaron founded The Milelion to help people travel better for less and impress chiobu. He was 50% successful.
Previous article
#FTR: June 4-10 in The Milelion’s Telegram and Facebook Groups
Next article
The Milelion’s Guide to Credit Card Points

several company has done it and failed, let wait and see this one

No way to use miles as cash equivalent. I was pretty annoyed when at the duty free shop at Changi. The cashiers were like very aggressive in asking me to convert my citibank premier miles to off set purchases…

I am all for it if it can reduce inflationary aspects of miles accumulation. I wonder how many actually used their miles to redeem an iPhone X? I remember if you took the theoretical value of 2c per mile, your cost would have been $4000!

While most of the readers here are more astute, the general public probably do not value miles the same as we do, or do not have the same means to monetize miles like the frequent flyer crowd does.

[…] is already a KrisFlyers existing partner, and is reportedly working together with the airline to develop […]