Rounding up the weekly airfare deals.

Helsinki and Dublin both have fares starting from S$808 which is a great fare. Munich from S$848 is decent too. Even London from S$988 is quite a decent deal. If you’re inclined to splurge, Business Class is also available starting from S$5,970.

Here’s the full list of destinations which are on offer:

A check on a flight to Munich actually yields a price which is lower than advertised: 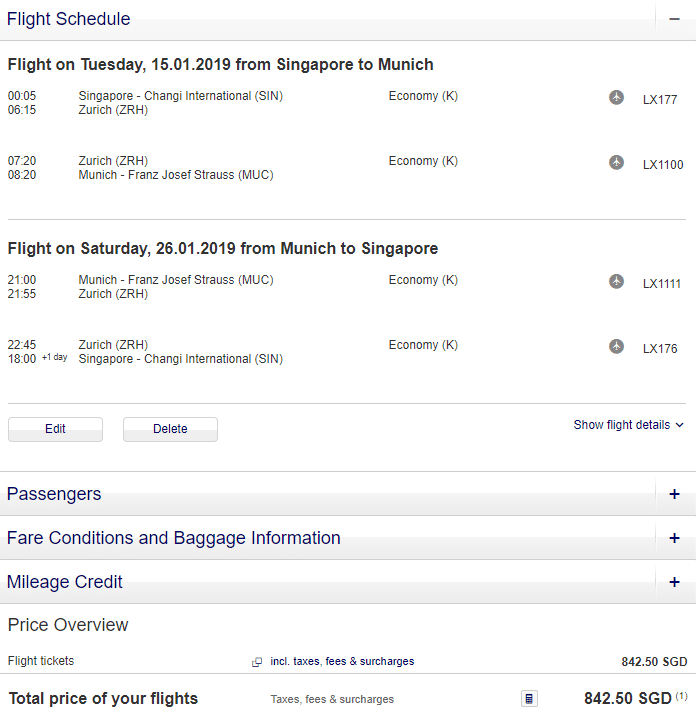 Most of these sale flights are in the ‘K’ fare bucket which will sadly not earn you any miles when credited to KrisFlyer.

KLM is holding its Autumn Hot Picks sale which runs from now until 21 August 2018. Concurrently, they are also holding a sale for their flights to Bali which also runs from now until 21 August 2018. Fares booked during this sale to Europe and other destinations in the Autumn Hot Picks sale as well as to Bali are valid for travel from 15 August to 30 April 2019. Tickets must be booked on the KLM website.

There are some great fares in the Autumn Hot Picks sale with Stockholm starting from S$800 and Berlin from S$811. Bali is going at a very good price starting from S$199 which is one of the cheapest we’ve seen KLM sell tickets to Bali at.

Here’s the full list of fares which are available for booking:

LOT is having a great fare sale where fares to Europe start from just S$749. There’s no mention on the LOT website of when you should book your tickets by so it’s best to grab hold of these fantastic fares as soon as you made up your mind.

Etihad is holding a sale in conjunction with the Travel Revolution event which is happening this weekend. You don’t actually have to make your way down to Marina Bay Sands Convention Centre to take advantage of these fares as they are available on the Etihad website. These fares have to be booked by 8 August 2018 and travel has to be done between 1 September 2018 and 31 March 2019. Tickets must be booked on the Etihad website.

Both Economy Class and Business Class are on sale with London from S$1,024 and Dublin from S$955.

Here’s the full list of destinations which are on sale:

Emirates is having a online flash sale which ends on 6 August 2018. In this sale, fares to Australia start from S$588, Europe from S$929, Africa from S$939 and America from S$1,459. Tickets have to be booked on the Emirates website to take advantage of these fares. Tickets bought during this sale are valid for travel between 10 August 2018 and 31 March 2019.

On the Emirates website, there are actually several featured fares which you will see. You will want to be looking at those which expire within the next 2 days as those are part of the flash sale deals. Here are just a few destinations which are on offer in this online flash sale: 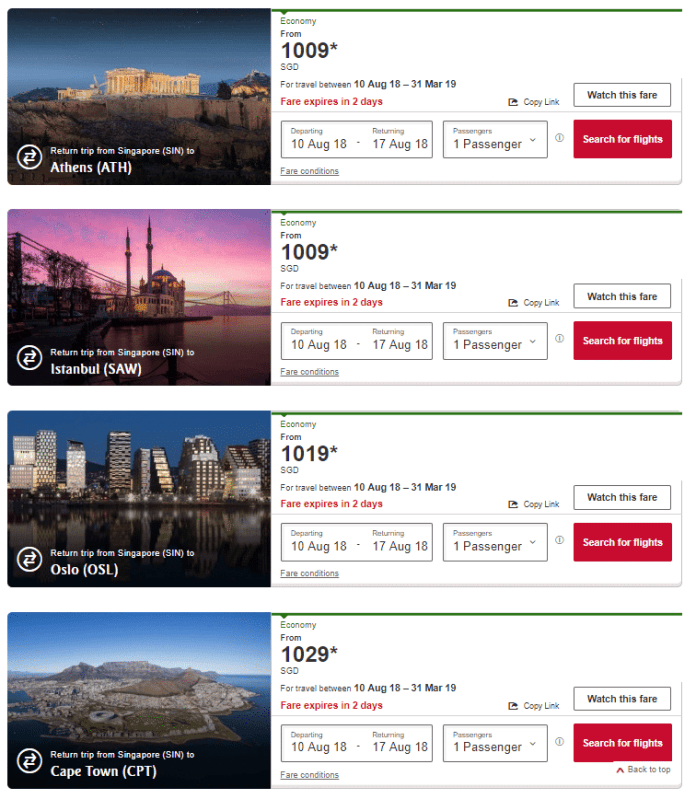 You can view the full list of destinations on the Emirates website. Emirates operates both the Boeing 777-300ER and their flagship Airbus A380-800 between Singapore and Dubai and both these aircraft features Economy Class in a 3-4-3 configuration. On the Boeing 777-300ER, that’s a little tight so if you’re big boned like me, you will want to select the flight which will be operated by their Airbus A380.

Click here to book your tickets with Malaysia Airlines

Singapore Airlines and SilkAir are currently having its sale where there are really good fares on offer. Penang and Phuket both starting from S$148 on SilkAir are great fares in my opinion and these fares might be of better value than what you’ll get on budget airlines.

Some great fares that should be worth noting are fares to Bangkok starting from S$208, Bali from S$238, Tokyo from S$588 and even Zurich from S$848.

Most sale fares must be booked by 23 August 2018 and the travel period for these fares varies. Here’s an example of fares to Zurich where there are different fares with different travel dates:

You can view the full list of destinations that are on offer on Singapore Airlines here. All Singapore Airlines Economy Class tickets will have a minimum of 50% mileage accrual rates with the introduction of the new fare class system at the start of the year.

There are excellent offers to be taken advantage of especially if you’re already in the midst of planning a trip for 2019. These fares are normally very limited in number so it’s best that you perform your bookings as soon as possible before the discounted fare runs out.

You can check “wheretocredit.com” if you’re unsure of which frequent flyer program would net you the most miles from these flights.

If you’re unsure of which credit cards to use to perform your airfare bookings to maximize your returns, you can refer to the table below.

Matthew Chong
Addicted to luxury travel while trying not to go broke, Matthew is always on the prowl for the best deals in the travel industry. When he's not busy studying, he can be found trawling the internet and reading up on credit cards, airlines and hotels. He also wouldn't mind taking you out on a date.
Previous article
Important information for SingSaver credit card applicants
Next article
Saturday session of Power Award Searching now available