Could you earn Star Alliance Gold status for S$2,800?

About a week ago, I wrote about Singapore Airlines offering some pretty amazing Premium Economy fares to the USA on their LAX/EWR non-stop A350-900 ULR flights. Round trip fares to LAX and EWR were going for S$1,328 and S$1,428 respectively, making them some of the cheapest SQ premium economy fares I’d ever seen.

Those fares are unfortunately no longer available, but from 20-27 September SQ is offering a different set of (slightly higher) fares, which still represent great value in the grand scheme of things.

Round trip flights to LAX and EWR are now available for S$1,398 and S$1,598 respectively, up by S$70 and S$170 from the previous sale. Travel dates to EWR remain the same, but LAX is now available for the second half of November and first 5 days of December.

SQ is using a slightly different version of their Premium Economy seat on the A350-900 ULRs, as The Points Guy unveiled in June this year.

This seat is heavily based on the existing Singapore Airlines premium economy seat. So, those familiar with the existing product are going to generally feel at home in this new seat. There are a few notable modifications: a higher seatback pocket, a redesigned armrest cupholder, a solid aisle-side armrest and reduced seatbelt bulkiness due to a lack of airbag.

The prime seats on this aircraft are the single seats towards the back of the cabin, in the back 3 rows where the configuration goes from 2-4-2 to 1-4-1. 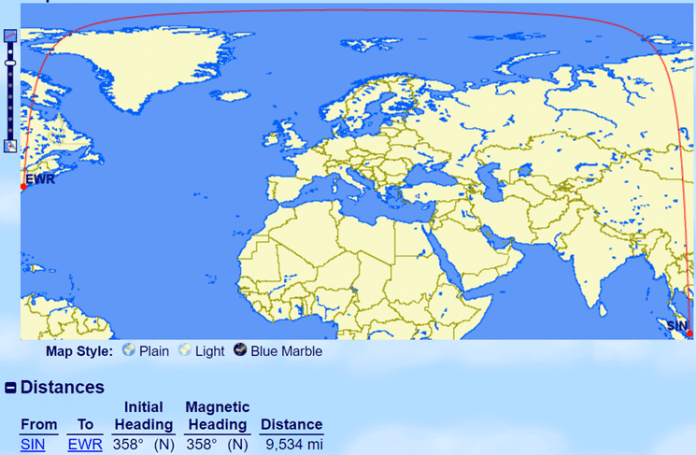 These fares book in fare bucket “R”, which accrues 100% mileage with KrisFlyer…

…but want to see something cool? Check out what happens if you credit them to Lufthansa’s Miles & More program. 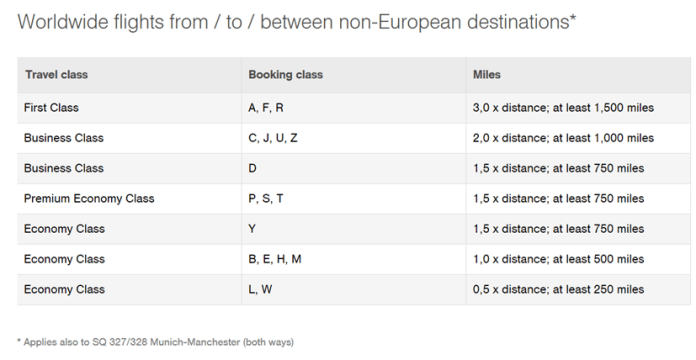 What’s going on? “R” used to be the fare code that SQ used for Suites tickets, which accrued 300% miles with most partners. That code was retired and later repurposed for Premium Economy, but it appears that not everyone got the memo.

Now, I have no way of knowing if Lufthansa updated their back end and simply forgot to update their webpage, so I still think there’s some element of risk involved in crediting to Miles & More. But we have to take what they say on the website at face value, and assuming the 300% credit does come off successfully (and I’d be sure to take a lot of screenshots if I wanted to try this), you’re looking at 57,204 status and redeemable miles.

Here’s how many miles it takes to earn elite status with Lufthansa Miles and More:

Unfortunately, Lufthansa’s elite system has much higher qualification requirements than most other Star Alliance carriers (100K miles for Gold versus 50K miles for most others), so this isn’t quite the “one flight Star Alliance Gold” that Aegean Miles and Bonus used to offer.

That said, taking 2X flights to LAX could potentially earn you Star Alliance Gold for S$2.8K. That is mighty, mighty tempting. It’s not like your miles would be wasted in Miles and More anyway- the program actually offers some pretty compelling redemption opportunities (and unlike most *A partners, is able to access SQ’s long haul First and Business class space).

For example, they often run “Miles and More bargains” where economy and business class awards are offered at up to 50% off. Here are some example awards from Bangkok, expressed in round trip amounts.

I’m already booked on the inaugural SQ22 to EWR, so I’m giving these fares a pass. If anyone’s taking them up, do let us know if you’re going to try crediting to Miles and More!

Aaron Wong
Aaron founded The Milelion to help people travel better for less and impress chiobu. He was 50% successful.
Previous articleTargeted: Win up to 15,000 miles with OCBC Titanium Rewards’ Catch Cart game
Next articleValuing the benefits of the AMEX Platinum Charge card

If I recall well, Lufthansa’s program (and most of the ones I know) do not distinguish between normal economy flyers (Krisflyer) vs business class or better (PPS). Hence even if requirements are higher, the benefits are better than standard KF gold….. or at least that has been my impression for a while….

Unfortunately the guys at FT already shared that said premium fares credit only 100% to M&M. It’s just a matter of their IT being slow on the update, but I can see some hardcore flyers contesting this. I can’t be bothered, though.

On the other end of the spectrum, R fares earns 0 miles on Alaska LOL

Can anyone confirm this as I intend to credit them to Alaska?

I have a SIN-EWR “R” fare coming up in November which i plan to put on my Turkish airlines . So that i can renew my TK *A gold status. But TK has not updated their SQ PE earning charts which means i might get “0” miles on TK ffp. What is my best option?

You either inquire with Miles&Smiles (IIRC) or contact your booking agent or the airline to change your crediting FFP. There’s always Krisflyer or Asiana Club to earn status with.

Alternatively taking 2 round trip flights to LAX would credit 38136 miles to asiana club (R fares are 100%). Just shy of 1864 miles from star alliance gold, which can be earned easily since asiana is not only star alliance but also partners with qatar and etihad and qualifying period is 2 years.

Which is what I recommend and have already booked to go. Plus, Asiana Club have longer renewal periods so your status will be good for at least two years.

Definitely the way to go if one intends to fly SQ premium economy more often.

This has been updated by M&M.