19 hours in a pressurized metal tube? Where do I sign up?

Yesterday Singapore Airlines announced the official relaunch of SQ21/22, the world’s longest non-stop flight to EWR. This flight, clocking in at just under 19 hours one-way, will be operated by the brand new A350-900ULRs that SQ will start receiving in September 2018. The first flight is scheduled to operate on Thursday, 11 October 2018.

In my post I predicted that Business Class Saver award space would be impossible to get, while Advantage awards would make sporadic waitlist appearances with the odd date available for immediate confirmation.

Well, I’m happy to announce that that doesn’t seem to be the case, at least not entirely. It does appear that Saver awards can be waitlisted, with Advantage awards available for immediate confirmation on some days. Here’s the inaugural flight, for example, as it appeared this morning:

Needless to say, I jumped on it immediately, waitlisting myself in both Saver and Advantage. And within minutes of doing so, I received the happiest email a KrisFlyer member will ever get: 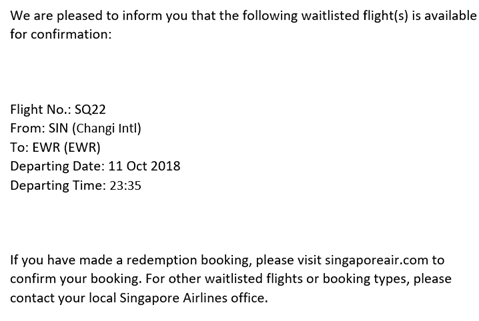 Which means my Advantage waitlist cleared, and I’m all set to fly on the inaugural SQ22 flight in October!

The one-way award cost me 135,000 miles and S$80 of taxes. I’m never a big fan of paying Advantage award prices, but in this case I can justify it for the opportunity to do an inaugural. If past inaugurals are anything to go by, it seems like I’m in for quite the show…

Unfortunately it seems like everyone else had the same idea, because as of right now there are no more Business Class award seats available on SQ22 on 11 October. Doing a search for that date now only throws up Star Alliance partner options, with Singapore Airlines ghosted out.

A quick check with KVS shows the party’s filling up fast in Business Class: 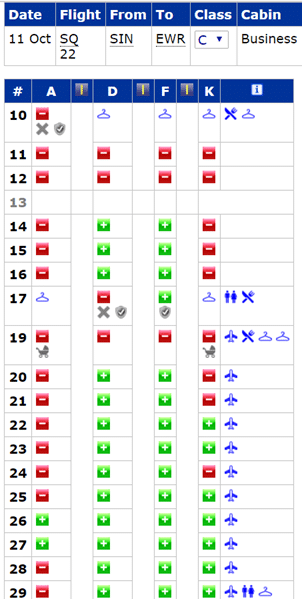 Some seats have a symbol which I’ve never seen used before on SQ flights. I can understand why the bassinet seats would have Keep Vacant/Offer Last tag on them, but what about 17D and F? Interesting… 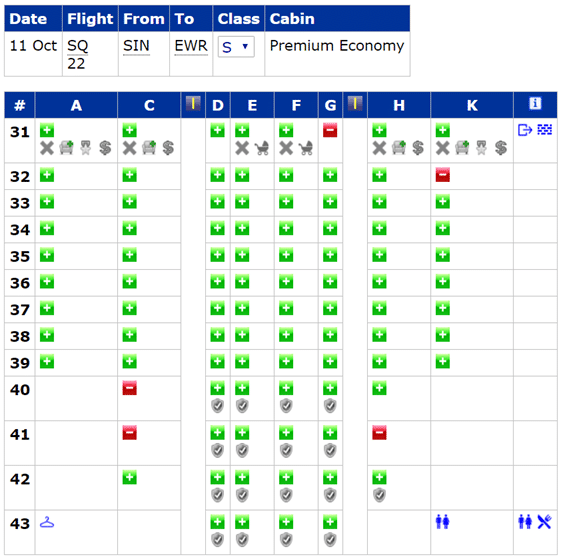 If you’re hoping to book this flight on dates other than the inaugural, I can tell you that I managed to find Advantage awards available for immediate confirmation in October (eg 15,22,23) and November, so a little bit of searching via the KVS Tool or just good old fashioned clicking and hoping on the KrisFlyer site should bear dividends.

As a reminder, SQ will be using the same Business Class hard product on the ULRs as they do on their existing A350-900s. This is the 2013 edition of their full flat business class seat, which is an amazing product- as well it should be, for something that’s expected to be your home for 19 hours. 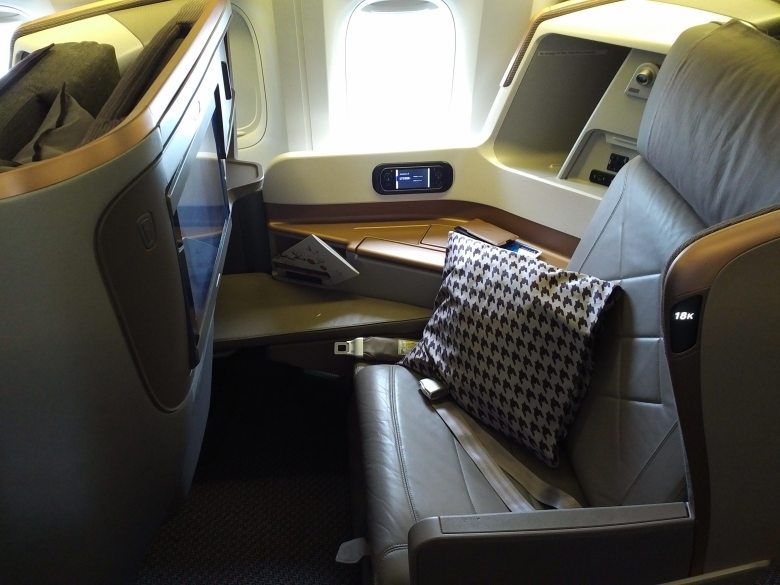 19 hours in a pressurized metal tube may not be some people’s idea of fun, but I am excited beyond words to have a ticket on the inaugural flight. I’m sure the cabin will be full of fellow geeks so at least no one’ll look at me strange when I start snapping photos of everything…

I’ve done New York quite a few times so probably won’t spend too long there, but I’m thinking of using the opportunity to review CX First Class on the way back as well. Time to make a check list of things to do on a 19 hour flight!

When I grow up I wanna be Aaron!

Congrats, Aaron! Looking forward to your IG stories (live perhaps?) from the inaugural!

I’m interested to know more about what KVS tells you… what is the coathanger symbol? what is the plane symbol? Presumably $ means you must pay for the privilege, does * mean some benefit for elite passengers? Enquiring minds must know!

Hi I am with you on same inaugural flight. Travelling specially from New Delhi to Singapore on 10.10.18 to be a part of this historic event.

awesome. drop me a pm- maybe we can meet up at the gate party!