One of the best opportunities to earn hotel points in Singapore via credit cards.

I’ve often lamented how hard it is to earn hotel points in Singapore. Only American Express and Citibank offer transfers to any hotel partners, and the rates are decidedly poor.

However, there’s a special transfer bonus now available to all AMEX cardholders that changes the equation significantly…

Get 3 Hilton points for every 1 MR transferred 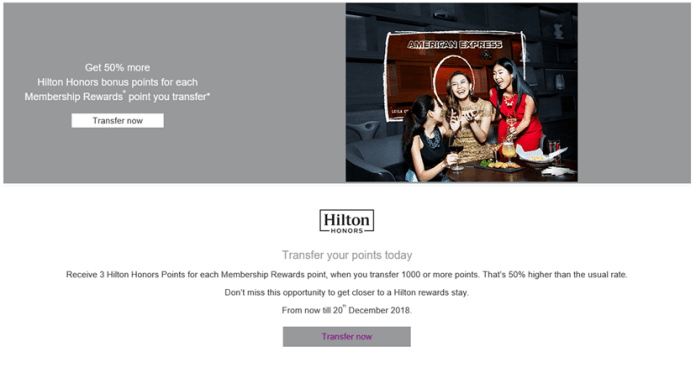 This offer will also apply to those who sign up for AMEX cards after the promotion started. In other words, it doesn’t matter when you get your AMEX card, so long as you do the transfer before 2359 hours on 20 December 2018.

There’s been some confusion about this offer because the eDM says:

Receive 3 Hilton Honors Points for each Membership Rewards point, when you transfer 1,000 or more points. That’s 50% higher than the usual rate

The AMEX team has told me to ignore the “50% higher than the usual rate” line, so I assume the eDM has a typo. They’ve confirmed that the rate is indeed 3 Hilton Points to 1 Membership Rewards point, but say that the online redemption portal will not be updated to reflect the bonus rate.

Why I think this is a bit strange is that AMEX is currently running a 25% transfer bonus to British Airways Avios, and this bonus rate does get reflected on the Membership Rewards portal (250 * 1.25= 312.5 Avios)

So I’m not sure why tactical transfer bonuses appear for British Airways but not Hilton, and if you’re the paranoid sort you may want to wait until I’ve clarified the matter further with AMEX. I don’t doubt that the rate is indeed 1,000 MR= 3,000 Hilton points, but I’m sure everyone would feel a bit better if all the t’s were crossed and the i’s dotted.

Edit: The AMEX team has confirmed the promotion will be honored

Should you transfer AMEX Membership Rewards points to Hilton at a 1:3 ratio?

In so many words, yes.

To put it another way: KrisFlyer miles can be earned quickly and easily everywhere in Singapore. Credit cards (especially the 10X ones), Kaligo, Mileslife, Esso, Shell, Grab, Chope, M1, PAssion card… I could go on and on.

Hotel points, on the other hand, are almost impossible to get in Singapore without (1) staying at hotels (2) buying them outright.

So here’s the math: if you’re a Platinum Charge cardholder, you earn MR points at a rate of

Looking at this on a points per S$1 basis…

The upside is obviously even greater if you spend on Singapore Airlines, SilkAir, Scoot or any Platinum EXTRA partners. 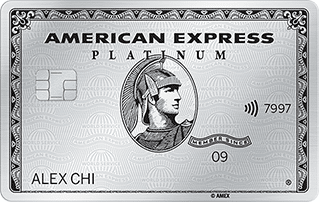 Why this particularly excites me is I’m well on my way to hit the $20,000 sign up bonus that comes with the AMEX Platinum Charge card, thanks to some upcoming nuptial payments.

That’s one short trip next year with The Milelioness sorted.

Or if you really want to stretch your points, you could use those 300,000 points for 60 nights at the Hilton Garden Inn Bali (yes, it’s near the airport, but still…)

or 30 nights at the Hilton Garden Inn Hanoi…

Or 15 nights at the Doubletree Beijing

I think you get the point. 300,000 Hilton points from S$20,000 of spending may not be much to our MS-ing, churning, American brethren, but it’s one of the most amazing ways to earn Hilton points in Singapore.

If you’re planning to do this, please remember that the points from the sign up bonus typically take at least 4 weeks to credit. This means you’ll pretty much have to hit your minimum spending a couple days before 20 November to be on the safe side.

As a Platinum Charge cardholder, you also get complimentary Hilton Gold status. Have a read of the full benefits here. 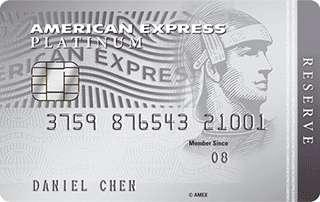 The AMEX Platinum Reserve has a $150,000 income requirement with a non-waivable $535 annual fee. The same caveat goes for the Reserve as for the Platinum Charge- the sign up bonus points may take 4 weeks or more to credit, so hit your spending threshold early. 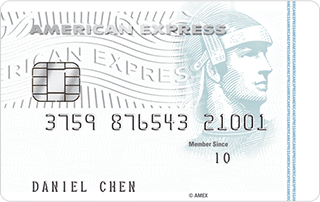 This is one of the best opportunities to earn hotel points in Singapore that I’ve seen so far, and that’s definitely where I’m going to put my Membership Rewards points once they get credited.

On Wednesday and Thursday’s Hotel Hacks webinar, we’ll discuss other ways to earn and burn hotel points. If you’ve not signed up yet, here are the links to register for Part 1 and Part 2.

Is this promo only for SG issued AMEX cards or is the bonus a global promo from Amex?

Hi Aaron. I called AMEX yesterday and the CSO told me differently. It’s bonus 3 HH points on top of the existing 1.25 point for every RP transferred subject to minimum 1000 RP transfer. That made up 4.25 HH points per RP. Not sure if is true but Ive made my transfer yesterday. Let see the result after 3 weeks

ok i’m talking to the AMEX product team so i’m guessing they have a better idea. i did a transfer today, will report back what i see

Any news on the transfer yet, Aaron?

the team has confirmed the transfer bonus will be honored at the 1:3 rate

where can i see this edm?

Thanks! The charge card annual is 100% unwaivable?

I called AMEX and was told..

Did anyone else call and either got same answer or different answer?

Hi, I have never converted MR to Hilton points before. Does anyone know if there’s a min amount of MR required to transfer and any fees to pay? Appreciate the advice.

Lastly, can I assume it’s only a good deal if I were to use the AMEX card for general spend that would generate up to 1.3 MPD beyond which I should continue to use other miles generating cards?

Hi DK.. I haven’t done this before either, but AMEX supposedly stopped charging for MR>HH transfer fees.. so.. no fees… Your last question re “…using Amex to earn 1.3 mpd…” I wouldn’t use Amex to earn 1.3 mpd.. why would you? There are so many other cards that will give you between 2-4 mpd for local use and up to 5 mpd for overseas use…. Also.. for my own calculations (NOT using the calculator I bough from Sungei Rd) and Aaron (or anyone else for that matter) please correct me without scorching my ass… converting Amex MR to HH.. unless… Read more »

If I already have a co-brand kf ascend, will I still be eligible for the Rewards Card sign up bonus? Thank you so much!

the two are unrelated, so yes.

I just read the terms and conditions on their website. Apparently it’s $500 a month spend for 3 months, so I guess it will be too late by then.

Has this been the case all along or did they change if as part of a new promo? I had thought it was $1500 within three months and I had spent quite an effort chalking up this amount in 3 weeks.

That said, give Cust svc a call. Amex Cust svc is great, they may make an exception for you

Ok, will give that a shot. Thanks!

Thats great to hear! May I know how long did it take for your bonus points to be credited?

The entire 24k points were credited at once about a week after my $1500 transaction.
14 Nov: My transaction
22 Nov (or earlier): Points credited

Hi Aaron, is there any confirmation about this promotion yet? It is still not reflected correctly on the rewards website. Thanks!

the amex team has told me it is 1 MR= 3 Hilton points. for whatever reason, the portal won’t be updated to reflect it, but it’s confirmed.

The coolest perk of AMEX Platinum Charge? The little-discussed “One Annual Fee” policy – The MileLion

[…] I’m currently seeking to rack up as many Membership Rewards points as I can, in light of the amazing transfer bonus that AMEX is running with Hilton Honors (1 MR to 3 Hilton points, until 20 December). The AMEX Platinum Reserve card offers 50,000 bonus MR […]

My Amex MR to Hilton Honors is done… but at ‘normal rate’ of 1:1.25… I’ve called Amex and they’ll reach out to Hilton to sort…

Anyone else have same problem?

Noticed the offer for US. Not too sure about SG. Would be good if anyone who succesfully received 3 Hilton Points can share here.

Hi Ken, was about to ask the same question. Just received my HH points and it was also done at the “normal” rate. Called Amex and they said the remaining “bonus” would be given in 8 weeks time. Wonder if anyone else had same experience?

Same. 8 weeks time. It will happen, but you’ve got to wait

CSO said only platinum card is eligible for the bonus points but i’m holding the rewards card. Take a leap of faith and hope the bonus comes in.

AMEX told me all cards that earn MR will get, fwiw.

Two Amex csos prev told me the rewards card is applicable but now one confirms that it isn’t. Am prepared to fight them all the way if it turns out otherwise. Just an FYI.

Please share any update. I too received confirmation earlier that the rewards card is applicable, but seems like they are back pedalling now.

I just got my bonus credited. I used the membership rewards card.

Thank you for letting us know!

Indeed.. Thanks, Craig.. Good to know.. I’ve just checked mine and, sadly, mine hasn’t been credited yet.. will twiddle thumbs til then..

Still no luck for me

Still waiting. Got only extra 50% bonus transfer 6 weeks after initial transfer. Called Amex and they said the remaining will be given by Hilton. Still waiting.

Was told the same thing. My 8 weeks is coming up next week so I’ll report back when I see it

apparently all bonus points will be in by 28 January 2019

by the way, has this promotion happen before between amex an HH?

My 8 weeks have come and gone but still no bonus points.. Called them and they seemed to not be aware of this promo 🙁