Use your OCBC Titanium Rewards card with ABT from now till 19 December and earn 12 mpd, capped at S$500.

ABT (Account Based Ticketing) launched in March last year, offering bus and MRT riders the chance to use a contactless-enabled Mastercard to pay for fares. Fares are billed to your credit card each time you ride with no additional surcharges, which removes the need to top-up and carry around a separate EZ-link card.

ABT is particularly exciting for miles chasers because it represents an opportunity to earn miles on public transport rides, something that historically has not been possible (with the notable exception of using a HSBC Revolution card in conjunction with EZ-Reload). And yes, you won’t be spending crazy money on public transport, but every little bit helps.

Currently the UOB PRVI Miles or the BOC Elite Miles World Mastercard are your best bet for ABT transactions. But OCBC has just launched a new targeted promotion that blows them both out of the water. 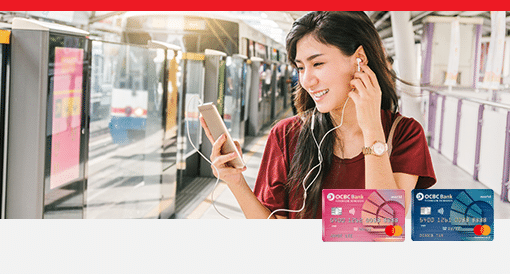 From now till 19 December 2018, OCBC Titanium Rewards cardholders who create an ABT account and link their Titanium Rewards card to said account will enjoy 30 OCBC$ (12 miles) per S$1 spent on bus and train rides. This is capped at S$500, but honestly if you’re spending more than that on public transport in a month you’re probably gaming the promotion anyway. 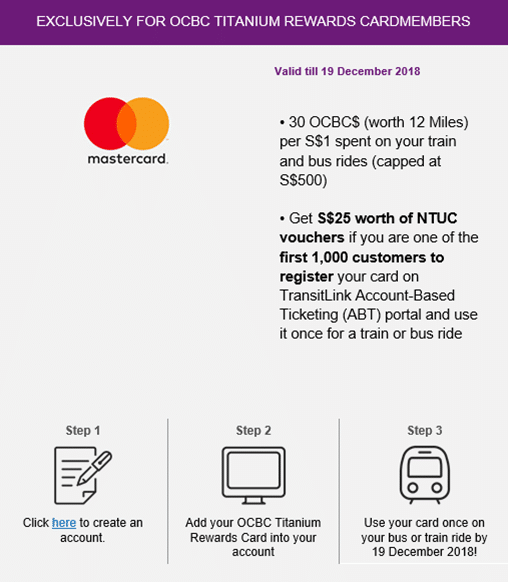 In addition to the 12 mpd, you will also get S$25 of NTUC vouchers if you’re one of the first 1,000 customers to register your card on the ABT portal and use it once for a train or bus ride.

Only cardholders who received the eDM will be eligible to participate. You can read the T&C here. Remember that ABT transactions are totally different from EZ-link top ups (in fact, they remove the need for them), so please, no questions on whether you can get the miles by topping up your card 😉

12 mpd on public transport rides, even if it is capped at S$500, is a ridiculously good offer. My understanding is that the offer was targeted only at a subset of people who had never used their OCBC Titanium Rewards card with ABT before, which probably explains why I didn’t get it.

Once you’ve paired your card with ABT, be sure to add it to your mobile wallet. You’ll then be able to register your phone for the ongoing mobile payments trial, allowing you to enter and exit gantries by just tapping your phone. What an age we live in. (Edit: Trial has closed, apparently)

I’ll be adding the Titanium Rewards card under the public transport section in our list of what cards to use where, always worth a bookmark!

Aaron Wong
Aaron founded The Milelion to help people travel better for less and impress chiobu. He was 50% successful.
Previous article
Can Singapore Airlines’ Regional Business Class still be booked by partner programs?
Next article
SilkAir will transfer 17 routes to Scoot- is this bad news for KrisFlyer members?

read quite a lot of stories where ABT suddenly stopped working, and also disabled the contactless payments of the credit card in one fell swoop. i certainly hope that won’t happen for these excited OCBC TR cardholders – given that a delay in receiving a replacement card might affect their mileslife/black friday/year-end spending!

how many times do i have to go from orchard to chinese gardens to gain enough pts for a business class flight from SG to Jakarta with my wife?

Does this mean that only those who got the EDM can enjoy this 12mpd ? Or anyone who has the OCBC TR ?

Only those who get edm

How do you even max out the offer within a month with a $500 cap? It’s impossible.

I’ve applied right after receiving the EDM last night and can only start using it on 24 Nov. I tried my luck this morning but the card was not recognised. So, to hit the $500 cap by 19 Dec, one must spend about $20/day.

Try MRT. MRT is synchronised every night. Bus is much slower.

I registered last night and took my 1st ride with it on MRT.

Any expected Singsaver promo next month for OCBC TR? I know I’ve probably missed out alot but was waiting for promotions for signing up!

After the promotion, how many miles does TR card gives for ABT?