Earn 1.4 mpd on your public transport charges with your UOB PRVI Miles Mastercard

UOB changes its tune on ABT, now offers 1.4 mpd with the PRVI Miles Mastercard.

A pilot for account-based ticketing (ABT) launched back in May. This allowed you to use your contactless-enabled Mastercard to pay for your bus/MRT rides, without additional charges. No need for an EZ link card, no need for topups.

The prospect of being able to pay for public transport rides with a credit card was exciting because it implied the possibility of earning rewards points. However, a general rule about rewards points is that banks don’t like to award them on so-called non-discretionary spend, or spend that doesn’t need to be incentivized. Day to day public transport rides certainly fall into this category, and at the time ABT launched, UOB explicitly said that bus/train transactions would not earn rewards points.

However, it seems their stance has changed. UOB PRVI Miles Mastercard holders got the following SMS today: 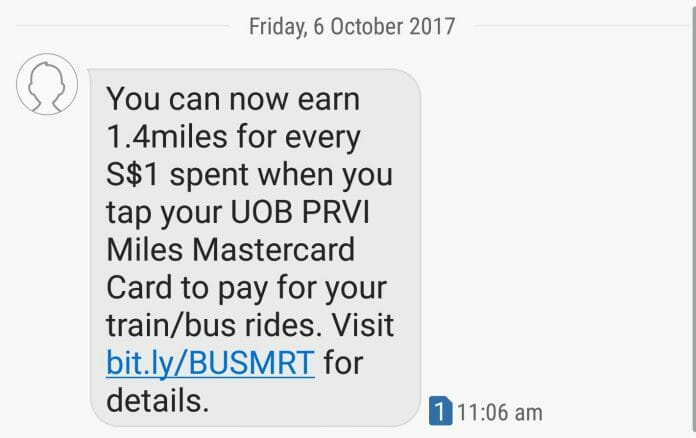 It appears that UOB is offering holders of the UOB PRVI Miles Mastercard the opportunity to earn 1.4 mpd on their public transport rides when they sign up for ABT. You can register for ABT here. Now I know what you’re thinking: UOB rounds down spending amounts to the nearest $5 for the purpose of awarding points. Since each bus or train trip is perhaps $2 at most, does that mean you end up with nothing?

Fortunately, no. In the FAQ you can find the following clarification:

Transactions will be processed and charged to you in your subsequent credit or debit card bills. The charges, which are aggregated, will be accumulated for up to 5 days or after a total of S$15 is spent on transit fares, whichever is earlier. The accumulated amount will be posted to UOB after 3 days. However, it may not be reflected immediately in your credit/debit card accounts

Your transactions will be aggregated, so as long as your spending over a 5 day period is >$5 you should earn some miles.

Technically, UOB is offering rewards for ABT not just on its PRVI Miles Mastercard, but on its other contactless Mastercards too-

However, the earn rate is really not worth considering. The UOB Lady’s Card and Preferred Platinum Mastercard earn 0.4 mpd, and as for the Krisflyer UOB Debit card…the less said about that the better.

By my estimate I probably spend less than $100 on public transport a month, so this isn’t going to be a huge source of miles anyway. Still, every little bit helps, so I’m going to register my card now.

Aaron Wong
Aaron founded The Milelion to help people travel better for less and impress chiobu. He was 50% successful.
Previous article
Review: Singapore Airlines A350 Business Class SIN-SFO / SFO-SIN
Next article
You could earn 2.0 mpd on public transport with your HSBC Revolution card

because the ABT pilot only covers mastercard

When ABT will covers VISA too

They did not say.

Does anybody know if miles are awarded for top up at GTM?

I only know the 3 local banks do not award top up at gtcs (for rewards/points). Some of these tncs are found in the general tncs and no card specific (eg. Dbs)

The Ocbc TR card gives 0.4mpd for online top up.

On a separate note amex does not restrict spending.

Three local banks – DBS is one. Others?

When you say AMEX, I assume you mean true AMEX card and not the one issued by the local banks, correct?

Technically speaking, UOB PRVI AMEX can make use of ez reload and earn 1.4 mpd too at a convenience fee of $0.25/reload. That’s still better than nothing.

Only the Amex? I know the PRIV master doesn’t (listed as exclusion in tncs)

I would like to ask if UOB pool the UOB Miles together with UOB points together under the same roof? Or does it segregate the point per card (like what Citibank is doing)?

i’ve been riding on the east west line since 6am this morning, have I got enough miles to go to penang in J yet

Reminder: 6 days left to sign up for credit cards with SingSaver - The MileLion

[…] best card for this currently is the UOB PRVI Miles at 1.4 mpd (you could link your EZ-Reload account to your HSBC Revolution for 2 mpd but this is capped at $200 […]