What is ABT and who’s giving away what?

Banks are giving away free money to mark the launch of ABT.

ABT stands for Account-Based Ticketing. It’s a new initiative that allows you to use your contactless enabled Mastercard to pay for your bus/MRT rides. Simply put, your fares are billed to your credit card every time you ride, and there’s no need to top up and carry around a separate EZ-link card. There are no additional charges involved.

You can read more details about the scheme here, suffice to say that the pilot has launched today. Some of you may have received an SMS from your bank inviting you to participate, but if not you can try to manually register here, subject to availability. If your card has this symbol, you’re potentially eligible

There is a general promotion being run by Mastercard that applies to all users of ABT.

The 200 Mastercard holders with the highest number of ABT transactions during each qualifying period (see below) will get a rebate of S$80. There are a total of 1,200 travel rebates of S$80 to give away from now till 19 Sept 2017. 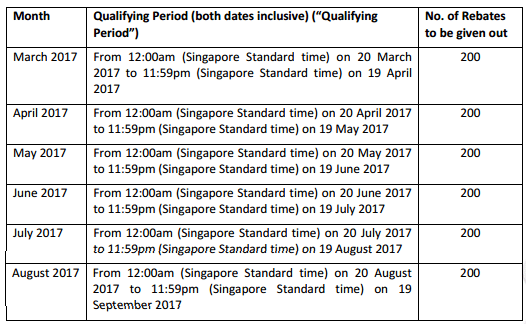 Full T&C can be found here.

Apart from that, the banks have launched various promotions to encourage people to sign up. Here’s the rundown

UOB has said that ABT transactions will not earn rewards or rebates. However, they are running 2 launch promotions as shown below.

You’re probably not going to win the S$1,000 of free rides (11 winners), but you might fare (HAHAHAHAHAHA) a bit better with the S$15 rebate. The first 20,000 cardmembers who use ABT for at least one transaction per month will get a $5 rebate for each of the 3 months (March, April, May) promotional period. Full T&C can be found here. 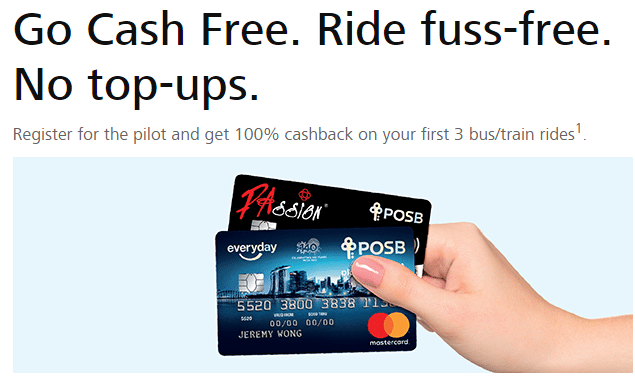 DBS/POSB’s offer is a 100% cashback on the first 3 rides between 20 March and 20 April. Full T&C can be found here. This offer isn’t capped, but it’s fairly weak compared to what other banks have. 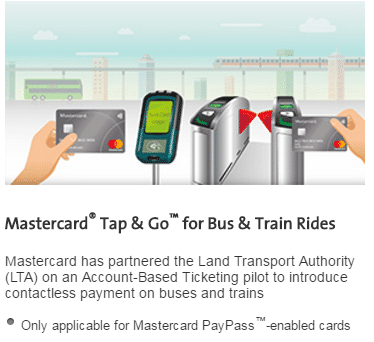 OCBC is offering up to S$15 cashback for cardholders using ABT. This promotion runs from 20th March to 19th June 2017, and a maximum of S$5 can be earned each month. This is open to the first 3,000 cardmembers per month. Full T&C can be found here.

EDIT: An earlier version of the article said that there was a minimum spend per month of S$80 required. This was based on this line in the webpage

However, the T&C do not specify any minimum spend of S$80 required. 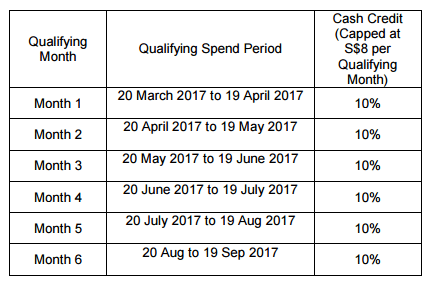 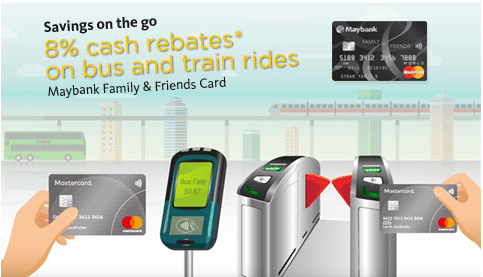 (Thanks to Kindsoul) Maybank’s version of this promo is similar to CIMB- 8% cash rebate with the Family and Friends card. You can read the T&C here.

(Thanks Yiwei) Standard Chartered is offering S$10 cashback each month with a minimum spend of S$10 on ABT. This promotion is capped to S$30 per cardholder during the period of 20 March to 19 Sept 2017. The full T&C can be found here. 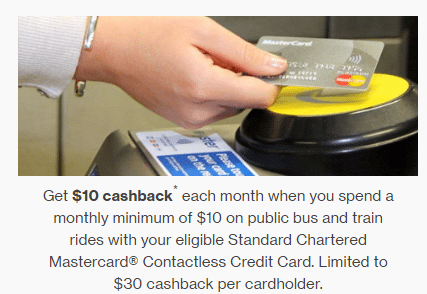 If UOB is any example to go by, it appears that banks will not give miles on ABT transactions. Therefore, unless you’re gunning for some (limited) free money, you might be better off topping up your Ez-link card with the HSBC Visa Advance (until the end of this month at least) to earn 10X points on $200 each month.

HSBC does offer it as well (Premier Mastercard)

Thanks- can you link me to the page? I can’t find it

Nope they do! just got a sms from HSBCthough it say to register please go to transitlink abt webpage

Then how is the monthly bill looks like ? Will it be compiled or every tap = 1 transaction charge, then my monthly statement will be very long

they consolidate and bill with every $15 block.

Hmm. I guess another way is to use woman’s card to top up fevo and use fevo for ABT?

Quick question oh HSBC advance. How do you top up your ezlink such that it counts as online? Thanks

Can also try through: http://home.ezlink.com.sg/top-up-your-ez-link/top-and-tap – Don’t have to wait for auto top up to be approved – Can preload before 31/3 (end of 10x) Problem is that the top and tap is a real pain in the bum. It is like it was coded in the 90s and has not been touched since. Uses Java and triggers all sorts of security things, so you need to get the domain name of the plugin from the website source code and manually add it into your exceptions list (at least that is what I had to do on the 2 or… Read more »

What are the domain names to be added into the exception list? Couldn’t find it/probably doing it wrong.

The $80 spend requirement for CIMB not stated in the TnC. Think there is a mistake in the website, as it is ridiculous to spend exactly $80 for tap and pay.

still see it in the footnote

I registered my DBS Woman’s MC for ABT. Does it earn 4x miles for these transactions?

No rebate/points other then the 3 free rides.

SCB promo. Seems to be the best 🙂

hmmm…isn’t topping up using ocbc titanium Apple Pay an easier way to earn 4x miles? No limit as far as I know until 31 March.

From 10 March 2017, OCBC$ / Robinsons$ / VOYAGE Miles will not be issued for transactions made at TransitLink General Ticketing Machines with your OCBC Credit Card.

But I am with you – earning 15x points using OCBC Titanium during the promo periods earlier was pretty damn sweet!

WARNING! After switching on to paypass as payment mode at GTM and using it for a train ride, got ‘bank card not supported’ message at a bus and had to pay cash. Switching back to Ezlink tomorrow.

You have to remove it from your wallet. I.E separate it from the rest of the cards. A bit of hassle. Ezlink uses a diff RFID or frequency.

In the Card Registration email you get after registering your CC on the site it clearly states that you should use the card only from 28th March. Hence, it wasn’t meant to work before that. I got the same error too and then read the email more carefully.

Just to let you know, I used my DBS WWMC on the bus today and it worked just fine.

Standard Chartered has promo too: https://www.sc.com/sg/credit-cards/account-based-ticketing/

For Standard Chartered Promotion, max cashback is capped at 30$ means if i tap 30$ i will get cashback 30$ (means free ride ?)

Wonder if it’ll earn 10X rewards as apparently the txns are processed online.

[…] also cool is that you will earn points on public transportation rides paid through Masterpass and ABT. Remember: this is different from loading your EZ-Link card with your credit card (which […]