Well, yesterday was certainly…interesting. It all started in the wee hours of the morning, when I awoke to see a post on OMAAT about too-good-to-be-true Cathay Pacific First Class fares out of Vietnam.

I jumped on my computer and indeed found round trip First Class from HAN-HKG-SFO pricing at S$1,662. 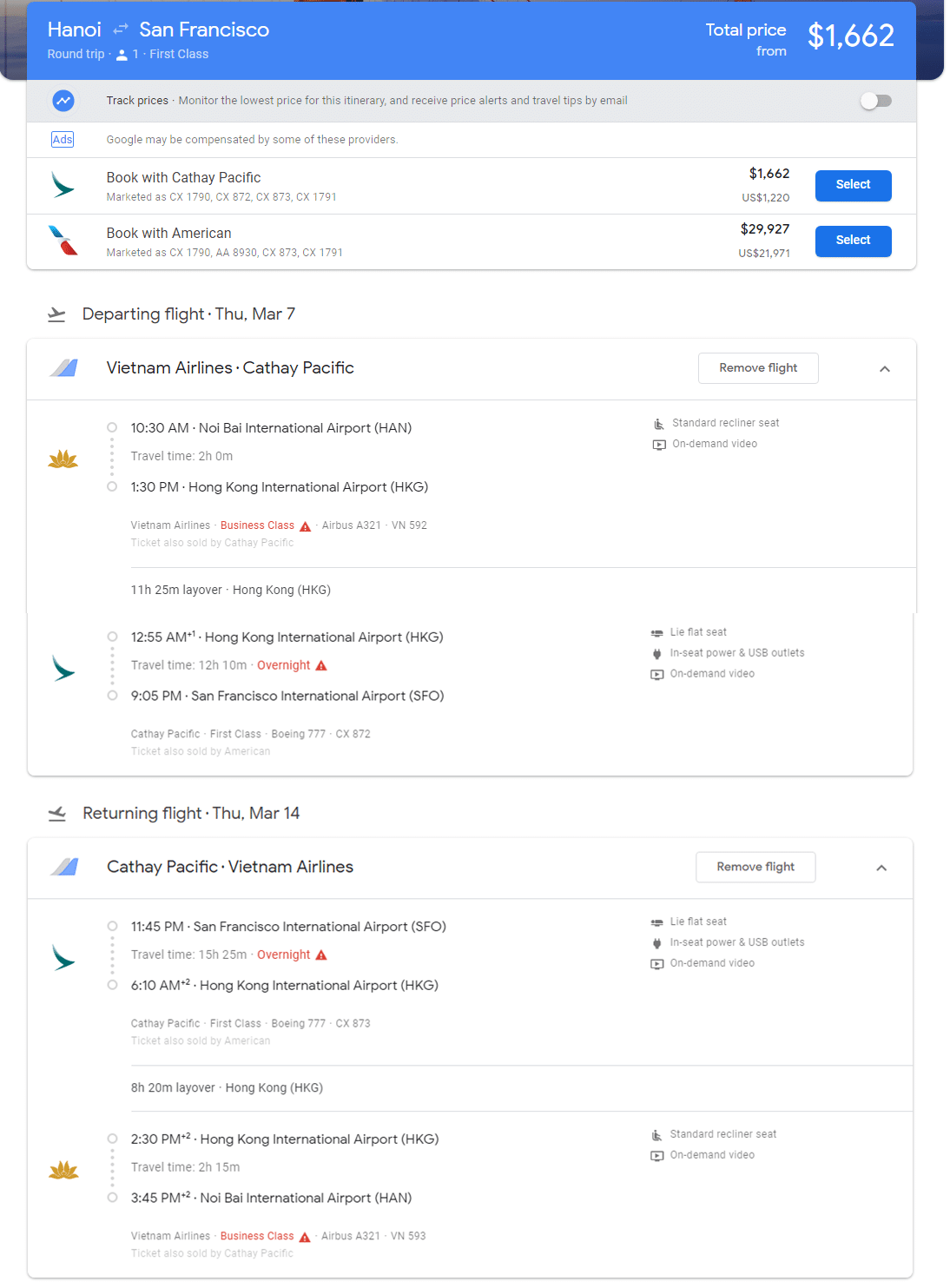 Now, you’d have to be deliberately obtuse not to know that this was a mistake, plain and simple. Transpacific First Class does not cost S$1.6K round-trip. It’s funny to read the comments in my previous post because there were some people genuinely angry at me for calling it a “mistake” fare, as if by sticking their fingers in their ears they could pretend that it was something other than what it was.

I also found it kind of silly that people got upset at blogs for publicizing the deal, because unless you’re the one who found it originally, you really have no say in who else can hop on. Most of the hot tips in the miles game we only know because someone was good enough to share it in the first place.

Anyhoo, I decided to book two tickets for my honeymoon to the States, just to try my luck. For the record, I don’t believe it’s “cheating” the airline to book such tickets, because they have the choice whether or not to honor the fares. If they do, fantastic! If they don’t, I’m not going to make any noise.

I honestly didn’t expect anything except a quick cancellation, but then today…

Cathay Pacific has decided to honor these fares

Happy 2019 all, and to those who bought our good – VERY good surprise ‘special’ on New Year’s Day, yes – we made a mistake but we look forward to welcoming you on board with your ticket issued. Hope this will make your 2019 ‘special’ too!
.#promisemadepromisekept #lessonlearnt

I’m gobsmacked. They could have cancelled the tickets and I wouldn’t have held it against them, yet they’ve chosen to honor what must have been a substantial amount of tickets booked in the few hours the fare was live. I don’t understand it, but I’m not about to question it.

There is some precedent for honoring these fares- earlier this year Hong Kong Airlines honored its US$560 Business Class mistake fares to the US. That said, this is on a different level altogether- we’re talking  First Class tickets, and a whole lot of them.

Sidenote: it’s interesting that the market hasn’t really penalized Cathay Pacific for this incident…yet. As per the SCMP:

I’m sure those of you who lucked out with these tickets will have many questions now. How do I position myself? Where should I credit the miles? Can I make changes to my tickets? Stay tuned, I’m drafting up a post that will answer all those questions…

Aaron Wong
Aaron founded The Milelion to help people travel better for less and impress chiobu. He was 50% successful.
Previous articleGet 1-for-1 Entertainer deals free with HSBC in 2019
Next article6 things to know about your Cathay Pacific First Class mistake fare

Am sure the share price will reflect this “incident” once they book these revenues.

I’d a fleeting suspicion that the timing of these mistake fares would encourage Cathay to flip this incident around as a New Year’s gift.. and am jolly glad that they did!

Thanks again Aaron for the tip-off yesterday, scored myself a deal just as the gates closed. Look forward to the follow-up article!

I hope it’s not too much to ask, but I’d also be interested to know about our options for that last leg from Hong Kong to Vietnam (mainly whether it would be possible to short check luggage and fly back to Singapore directly from Hong Kong).

CX is quick to point out it is caused by human error. Market will probably be more upset if the mistake fare is caused by some system-wide failure.