I saw a post on Cheaponana today regarding the BOC Elite Miles World Mastercard that caught my attention. 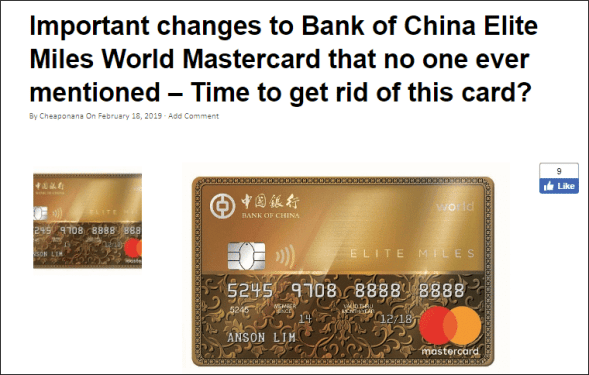 To summarize what he found:

I dug into these findings a bit, and here’s what I know:

The definition of overseas spending will change…but not yet

The BOC Elite Miles World Mastercard used to offer an unbelievable 5 mpd on overseas spending. That promotion ended on 31 Dec 2018, but its regular rate of 3 mpd still makes it the best card to use in this category.

And here’s the revised definition:

I can see where the concern is coming from. Originally, the definition of overseas spend was fairly broad- so long as the card transaction posts in FCY, miles will be awarded according to the overseas spending rate.

My BOC contact tells me that despite the update to the T&Cs, as of right now, nothing on the back end has been changed. In other words, so long as your transaction is posting in FCY, you’re still earning miles according to the overseas spending rate.

However, he did say that T&C will be updated again within a few weeks to provide greater clarity on overseas spending. He didn’t say anything beyond that, but the way I see it there are two possible outcomes:

I’m inclined to believe that (2) is much more likely to happen than (1). I haven’t seen any bank adopt (1) as its general definition of overseas spending (although they have, on occasion, adopted it for the purposes of certain promotions/perks, e.g. to unlock the UOB PRVI Miles AMEX limo you need to spend $1,000 overseas excluding card not-present transactions like online/phone orders), because it disincentivizes online shopping which is generally discretionary and beneficial to the bank.

UOB has set the precedent for banks to do (2), although I’m not a big fan of this because it puts the onus on the customer to figure out just which online merchants use overseas payment gateways. How on earth are you supposed to know that? Your guess is as good as mine.

My theory is that when BOC redefined “local spend” as “online transactions made within Singapore”, they were referring to where the payment gateway is located, not the person buying the items.

That’s my best guess as to what the spirit of the change was, but we’ll get more clarity in the weeks to come.

The expiry of BOC Reward points has not changed

When the BOC Elite Miles World Mastercard was first launched, there was some confusion about the expiry date of BOC points. The original T&Cs stated the following:

That couldn’t possibly be right, because it meant that if you earned points on 29 June 2019, they’d literally expire the next day. After some clarification with BOC the T&Cs were updated to reflect this:

This makes a lot more sense- your points are valid for a minimum of 12 months and a maximum of 24 months. Hardly the longest in the market, but not totally unreasonable either.

Cheaponana pointed out that in the new T&Cs, the old expiry dates had returned once more:

What probably happened is that the BOC team used an old version of the T&Cs when updating the definition of overseas and local spending. That’s pretty poor version control, but long story short I’ve been assured that nothing has happened to the points expiry policy.

Cheaponana noted that the verbiage regarding the Plaza Premium lounge access benefit has been removed from the new T&Cs, perhaps suggesting that this was no longer available. 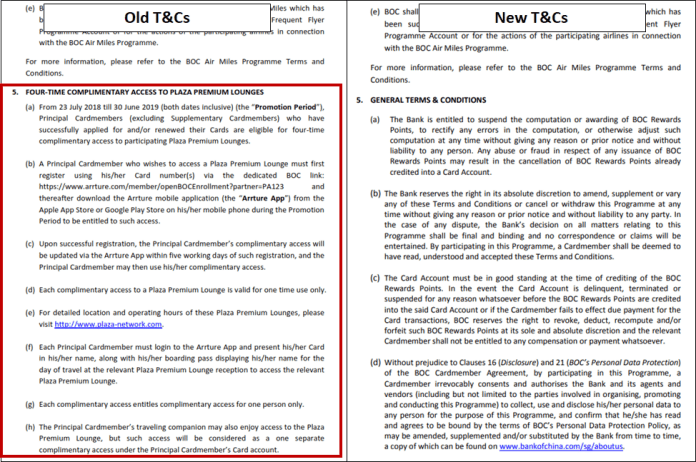 I’ve been told that the four Plaza Premium lounge visits offered to cardholders is a limited-time promotion, and the decision to extend it has not been made yet. However, any cardholder who applies and is approved for the card before 30 Jun 2019 will still receive the vouchers- it’s just that all the access vouchers expire on 30 Jun 2019.

Other changes to excluded transactions

In addition to the changes Cheaponana spotted, I ran the old and new PDFs through a comparison tracker and found the following:

BOC seems to have tightened the language regarding excluded transactions. In the new T&Cs, they explicitly exclude the “top up of a prepaid account” and have excluded all bill payments, no matter how they are made.

The former suggests that they’re cracking down on people who have been using the card to fund accounts like YouTrip. I’ve never personally tried this, so can’t comment whether it worked or not. I also can’t tell the difference between “loading” and “top up”, but the fact that they explicitly changed the wording suggests they’re on to something.

The latter may imply that you won’t earn any miles for mobile phone/utility bill payments, although that’s also not possible to confirm without further testing. I do wonder how this affects insurance bill payments, given that back when the card launched the team was quite proud of the fact they were one of the few cards to award points for this.

When the BOC Elite Miles World Mastercard first launched, it was pretty much a free for all in terms of what earned miles. Now, it seems the bank is trying to tighten the ship. That’s entirely their prerogative, so long as it’s done transparently and with adequate notice.

For me, the big question mark right now surrounds the definition of “overseas spending”.  If I were a betting man, I’d say that BOC will adopt the UOB definition, but we’ll only know for sure in a few weeks.

On an unrelated topic, it’s been nearly 7 months since the BOC Elite Miles World Mastercard launched in Singapore, and there’s still no online landing page for the product. I think it’s kind of telling that when you google the product name, all you find is links to other sites talking about the card, rather than the bank itself disseminating information. That’s really not to BOC’s advantage, and something they need to fix quickly.

Moreover, I’m still amazed that in 2019, you need to physically go down to a BOC branch to get your BOC Elite Miles World Mastercard linked to your BOC ibanking. I mean, I knew when I applied for the card that I was doing so for the miles, not IT excellence, but still…

Aaron, any idea how we are able to redeem our miles online?

Same here- surprised that redemption was rather efficient. Submitted scanned copy of my form on Day 1, called on Day 2 and they confirmed that miles will be credited. Miles credited on Day 3, even before a “redemption letter” was received in my mail box.

Fill up form, scan and send to their email [email protected]

btw any of you guys won the return air ticket to bangkok for being the top 200(?) spender? 😀

Have they informed winners yet? I called in end-January and was told that the list isn’t out yet.

The top 100 spenders list came out on 11 Feb. Which is typical BOC – late as usual. The terms say qualified cardholders can start booking your flights from 1 Feb. They told me I qualified but now a week later the redemption letter still hasn’t arrived.

@cheesecake Did you have to call in their CSO to find out if you qualified?

Yes I called because I was curious that 1 Feb had come and gone, yet there was no communication.

I read elsewhere winners will get a sms, did you? and if you don’t mind to share, how much did you charge? 😀

No SMS received. No letter still. Just the usual BOC in a mess.

Just called. The redemption letter will be mailed out by end Feb. Not holding my breath.

Letter arrived today. But boy it’s all paperwork, paperwork with BOC. You have to bring the physical letter to Tradesinds at Tampines on weekdays between 9 am to 5 pm to “redeem” a flight booking! Ridiculous… last I checked we are in 2019! LOL.

But the letter does say “all in” return ticket on SQ – I was originally expecting that it was only for base fare and traveller is responsible for fuel surcharge and taxes – so this was an unexpected surprise.

I emailed CSO to check status, got a call back to confirm I am one of the top spenders, and said the redemption letter will arrive by 22nd Feb at the latest. Haven’t opened the mailbox yet. I charged a new car purchase on the card.

Ah.. Very nice deal then.. Congrats, and thanks for sharing..

Got the letter today finally!

got the letter today too. charged about 50k due to wedding / insurance expenses

got it too. i wonder what booking class this will come under.

(now not so) Happy Camper

No bill payments of any kind.. already in effect?

Aaron Wong
Author
Reply to  (now not so) Happy Camper

No idea if this has been done, but maybe here’s where boc’s relatively slow processes can work in your favor…

(now not so) Happy Camper
Reply to  Aaron Wong

I’ve phoned in.. CSO actually said to me, “went into effect in Jan, but even previous months also affected..”

I asked him if what he said made sense to himself.. he thought about it, then said he’d check and get back to me.. I said, “good idea..”

Happy (again) Camper
Reply to  (now not so) Happy Camper

So here’s my promised update.. which actually kinda isn’t, bcos CSO never actually got back to me (yet).. but do have a coupla other nuggets to share about this wonderful (or wonderfully amusing) bank… Now, like lots of you out there, I waited forever for my card to appear in my mailbox.. and like some of you, the credit limit extended to me was an almost laughable figure (in relation to IR8A).. but used it I did, to the point where I had to go ‘pay up’ at branch bcos I was running out of credit, and I did it… Read more »

Thanks for the update Aaron! Guess this means using it as an ezlink will not incur any points anymore? Previously it was 2 miles per dollar yeah?

You can still use the card for abt and it will still earn 1.5 mpd

To clarify, this means having registered it with ABT and just tapping it without any top up at the machine? Thank you.

dont they need to give customers prior notice before effecting any changes? 🙁

Do you have any idea about the complementary Lounge Access? I got my card since Nov 2018, have not use any of the lounge. How Do I use it or it is cancelled for us whose got the card before new T&C removed it?

They do not post me any lounge voucher during I receiuved my card last year Nov 2018.