The biggest dealbreaker for the KrisFlyer UOB Credit Card

On paper, the KrisFlyer UOB Credit Card is a worthy addition to your wallet. But there's one major catch that may ruin it: delayed crediting.

Today’s Straits Times reports that the new KrisFlyer UOB card has made quite the splash since its launch last week.

UOB didn’t provide figures, but said that signs ups had exceeded expectations, and that millennial (there’s that word again!) customers were expected to make up about half of all new sign ups.

I’m on record as being less-than-impressed with the KrisFlyer UOB Debit Card, the product that started it all, but I believe in giving credit where it’s due: the KrisFlyer UOB Credit Card has some good things going for it. You can read an in-depth review here, but to summarize the key features once more: 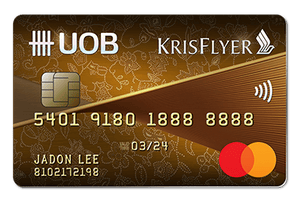 On the surface, the earn rates are great. It’s rare that you find a card with so many bonus categories, and that makes the KrisFlyer UOB Credit Card a good option for people who want a one-card strategy.

There’s one big catch: Although you earn 3.0 mpd on dining, food delivery, online shopping & travel, and transport spend, those miles aren’t all credited at the same time.

UOB calls the 1.8 mpd portion, with no small sense of irony, “Accelerated Miles”. Here’s an illustration of how it works for someone who gets the card on 1 May 2019:

In the illustration above, the cardholder spends $1,000 each month on dining, food delivery, online shopping & travel, or transport. Each month, he gets 1,200 base miles credited to his KrisFlyer account (1,000 *1.2).

(1) You’re locked into the card

Let’s start with the most obvious drawback: because all pending accelerated miles are forfeited if you cancel your card, you’re effectively locked in until they arrive.

Thinking back to the example in the table above: suppose the cardholder wants to cancel his card in April 2020 to avoid paying the $192.60 annual fee due in May 2020.

Tough luck. Either he pays the fee for the second year (or gets it waived) and waits until the Accelerated Miles come in June 2020 before cancelling the card, or he cancels in April 2020 and loses whatever Accelerated Miles he has pending from the first year.

Even if he chooses the former, he needs to be careful not to spend anything on bonus categories in May/June 2020, because when he cancels in June 2020 he’ll forfeit all the Accelerated Miles pending from those two months.

To be fair, you will get 10,000 miles for paying the $192.60 annual fee, so it’s not a complete junk fee. However, it’s now possible to buy miles at prices well below the 1.93 cent mark, so you’ll need to do the math for yourself and decide if it’s worth it.

Oh, and don’t bother calling up to ask for the Accelerated Miles to be credited early. UOB has stated their stance pretty clearly in the T&C:

(2) Reconciling bonus points will be a nightmare

In a perfect world, bonus points would always credit properly.

But we know that’s just not the case. Due to vagaries in MCCs and errors in back-end tracking, there will invariably be discrepancies between the bonus miles you think you should get and those you actually get.

Because most banks don’t provide transaction-level points breakdowns online, reconciling your bonus points usually means tracking your transactions in an excel spreadsheet, computing points manually and calling up the bank when something seems amiss. It’s not a fool’s errand- many people have been able to get wrongs righted by doing so (e.g Citibank Rewards not awarding 10X on Deliveroo). It is time consuming, however.

Moreover, think about it this way: if it’s already so hard to do this reconciliation one month after the fact, can you imagine doing it up to 14 months later? Imagine going through hundreds of transactions on the phone with a CSO, arguing about grey areas, or simply digging through your inbox for proof that certain transactions were processed online. It’s a nightmare waiting to happen.

All things considered, Benjamin on the Telegram Group raised a very good point:

If you care enough about your miles to track your spend for 1 year and fight UOB if needed, then you should care enough to optimize for 4mpd (or more) at the point of spending.

That summarizes the situation for me. The KrisFlyer UOB card does not offer the highest rates on every category of spend, but it’s a great product for the lazy miles collector because it houses a wide variety of transaction bonuses in one card. Miles collectors who are fastidious about getting every last mile tracked and credited properly will probably already be maximizing their haul by using other cards.

Devaluations are a fact of the miles game. We last saw a KrisFlyer devaluation in January this year, less than two years after the last price adjustment. Before that, the average cadence between a devaluation was about five years, and I remarked that the trend now seemed to be higher frequency, lower magnitude devaluations.

Why? Picture this scenario sometime down the road: SIA announces another award chart devaluation, say to the magnitude of 15%. Most people rush out to burn their miles before the price hikes take effect. But you’re still waiting for your Accelerated Miles to come in, and they won’t arrive until way after the devaluation. You’ve effectively accepted a 15% haircut on your miles, with no recourse.

(4) Your miles “age” at different rates

The KrisFlyer UOB Credit Card doesn’t earn UNI$; it earns miles which are directly credited to your KrisFlyer account. In one sense, that’s a blessing because it means no transfer fees. But in another, that’s also a problem, because it means the 36 month KrisFlyer expiry countdown starts immediately.

What else could UOB have done?

I don’t think the $500 spending on SIA-related transactions to unlock the 3 mpd on dining/online/transport is unreasonable, in and of itself. You could hit that with a couple of economy class tickets, or perhaps even taxes and fees on award tickets if you redeem them frequently enough.

What is less reasonable is expecting customers to wait up to 14 months for their bonus miles to come in. Miles are a de facto form of currency, so it’s almost as if you’re giving the bank an interest free loan for that period.

I get that there’s no way for UOB to know ex ante which customers will and won’t hit the $500 spending requirement, but there are other ways they could have gone about doing this:

I am, of course, assuming that the reason for the delayed crediting is purely due to the difficulty in ascertaining who will hit the spending requirement (as opposed to a more nefarious lock in/interest free loan theory). I know it’s easier said than done, and I’m sure that IT systems don’t always play nice (rumour has it that some 21st century banks still manually reconcile and award bonus points!), but surely 14 months is pushing it?

The core value proposition of a cobrand card is direct crediting, which means your miles are available more quickly.

In that sense, it’s kind of ironic that getting miles from the KrisFlyer UOB Credit Card is anything but fast (even the sign up bonus miles involve waiting till 31 Oct 2019). This isn’t a card for those who need miles in a hurry, or want to travel at short notice. It also isn’t ideal for those who like to meticulously track their miles, or don’t like the idea of being disproportionately exposed to devaluation risk.

If none of that bothers you, then the KrisFlyer UOB Credit Card could be a worthy addition to your wallet, and could serve as a dining card for men who don’t already have the UOB Preferred Platinum AMEX (ladies could always get the new UOB Lady’s Card).

Aaron Wong
Aaron founded The Milelion to help people travel better for less and impress chiobu. He was 50% successful.
Previous articlePost Ranch Inn Dining and Ranch Tour
Next articleSingSaver Battle of the Cards: Pick the winners and get $150 cash; plus win a trip to Tokyo

or we can just sign up for the first 5K miles 😛

This, frankly, is the problem I have with all UOB products and promotions – they are just too difficult!

And now waiting a staggering 14 months to get bonus points – not in a million years.

I’ll stick to my Ocbc voyage frankly which posts points instantly and allows you to transfer with no minimum amount or transfer fee.

Thanks for picking it apart. When it involves T&C trickery to get subscribers… it shows that the 2 partners of this card are not in great shape. Hope they waste their marketing expenses… or change their T&Cs.

1.2 mpd straight to Krisflyer is good for me. Better than Amex krisflyer. I hardly get enough UNI$ with PrivMiles alone.

The moment I saw “new card from UOB” my first reaction was move on, really nothing too interesting to see… and I was right!!

All other spending should be put on 4mpd cards.

The biggest factors for me to apply:
1. I don’t have any UOB credit card.
2. I don’t really have a proper MasterCard credit card (only have MC debit cards, most of my credit cards are Visa, with one AMEX).

wait 1 year for my bonus miles, what a joke. SQ will devalue the miles for sure since there are so many in circulation already

I’m curious to see what Amex does with their Co brand, great time to put a beating on UOB

AMEX has quite good promo from time to time. A reason I still keep them.

Current sign-up bonus miles still the most with Amex!

It’s strange we don’t seem to bash the 10X cards for whatever they can’t do. It’s not the best card in the market, but we can use it for what it’s niche is. For that last few hundred miles we need for the dream award, this is perfect. No fees, and no need to transfer that 10K block.

Actually hor… It isn’t too bad to award the accelerated miles at the end of the membership year.. Every mth I won’t be spending everything on the bonus type of spend, so I won’t get enough miles to redeem. If I get the accelerated miles in a lump sum at the end of the membership year, then I will have enough miles to redeem. Also hor, 3 years validity will start from then… Rather than fragmented amt being expired here and there. That will be even more wasteful.

A bit unrelated as this is about the DBS WWMC. I have made three calls to them in the space of 12 hours, and no one knows the answer for sure: It is regarding the $2000 cap per month for 10x rewards. Is this cap based on the transaction date (so all the online purchases / transactions made in a month) or the posting date (all the online purchases posted in that month)? I would sure hope this is based on transaction date, otherwise, the DBS WWMC runs into a bit of a problem with unclear mileage deposition… In other… Read more »

the webpage to make the UOB selection appears to be down permanently (i have checked one multiple occasions over the course of this month). Any idea whether this is a permanent change and we will need to ring in to the hotline to make changes to the selection?