Brace yourself. From 1 November 2019, Chope will eliminate restaurant vouchers and add minimum spend requirements to its ChopeDeals discount codes.

Over the long weekend, Chope announced some changes to its ChopePerks program that will take effect from 1 November 2019.

Make no mistake about it: these changes are bad. Chope has tightened the noose on its rewards program, and only given three days’ notice in the process.

It doesn’t help that they’ve done a Citi Prestige by plastering a big “we heard you!” banner across the eDM, which starts with “you asked, so you shall receive”.

I can’t think of a single Chope user who asked for this, so it just comes off as kind of tone deaf and disingenuous. I’m no starry eyed idealist; I know that loyalty programs need to revise their economics from time to time to stay viable. That said, customers aren’t stupid, and it really doesn’t help when negative changes are communicated this way.

From 1 November 2019, ChopePerks will no longer offer restaurant vouchers. Instead, all dining redemptions will be in the form of ChopeDeals discount codes.

Currently, ChopeDeals discount codes only come in a $30 denomination, which requires no minimum spend. From 1 November 2019, two other denominations will be added, and minimum spending restrictions imposed:

Why is this bad?

Chope is effectively adding a cash co-pay to redemptions

Even though the redemption ratio for ChopeDeals discount codes is the same as restaurant vouchers, the addition of a minimum spend clearly constitutes a devaluation.

What this effectively means is Chope is adding a cash co-pay to all redemptions. Gone are the days where you could waltz into a restaurant, redeem a dining voucher and have a free (or highly discounted) meal. From here on out, it’s pay to play, and if you want to redeem a dining reward from 1 November, your minimum cash co-pay will be $10. 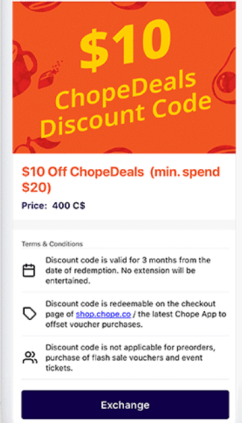 Keep in mind, $10 is the minimum out of pocket expenditure. In reality, it’s likely to be more than that, because of the fixed minimum spend requirement. Unless you’re able to find a ChopeDeals voucher that hits this minimum on the dot, you’ll have to top up the difference. 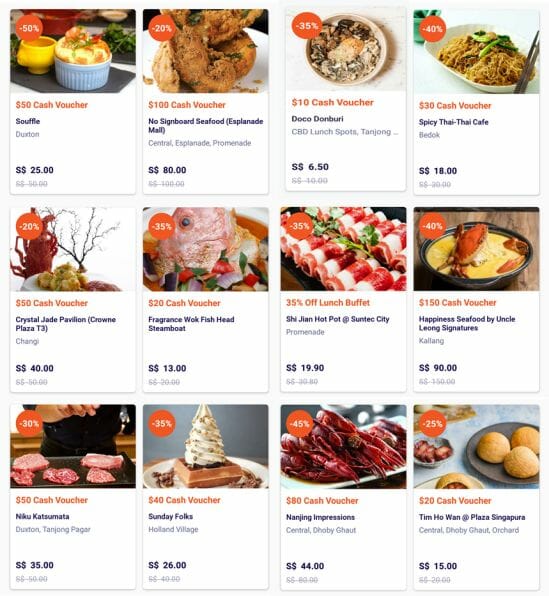 You save less during peak periods

Another reason why this is bad is because diners effectively lose peak period discounts.

The existing restaurant vouchers do not have restrictions on timing. Sure, you can’t use them during certain blackout dates, but on dates where they’re valid, it doesn’t matter if you come at the peak of lunchtime or just before closing.

Contrast that to ChopeDeals vouchers- although all day versions exist, the best deals are for off-peak dining. For example, you can get 25% off a $20 Tim Ho Wan voucher, provided you’re able to dine between the lull hours of 2.30-5pm on weekdays.

So the upshot of the changes are that users lose peak period discounts. You’ll have to dine during off-peak to stretch the value of your C$.

I suppose you could argue that since bonus C$ promo codes have all but dried up, it would be difficult for most people to earn beyond this cap in a month anyway. At 100-175 C$ per reservation, you’d need more than 12-21 reservations per month to exhaust the limit.

However, this is still a negative change, insofar as it penalizes long-time Chope users who have been squirreling away their C$. If you fall into this category, you’d better burn as much as you can right now.

What do I do now?

If you have C$ in your account, start looking for your favourite restaurants and redeeming vouchers as soon as possible. It doesn’t matter if you don’t intend to dine straight away; so long as your voucher is issued before 1 November 2019, it will still be valid for 90 days.

If you’re holding on to an existing $30 ChopeDeals discount code that was issued before 1 November 2019, that code won’t be subject to a minimum spend.

With these changes, ChopePerks ceases to be a rewards program in a traditional sense. It’s now more of a discount scheme, where the best you can hope to do is save some money on a future meal, instead of getting a free one. It’s kind of like an airline removing outright redemptions and replacing them with discounts off revenue tickets instead.

Historically speaking, Chope was one heck of a generous rewards program. I still remember the days where I regularly earned 600-700 C$ per reservation, thanks to my LiveUp membership and the regular promo codes.

LiveUp has since halved the C$ per reservation to 100C$, and the promo codes have disappeared, so I guess it’s really a case of easy come, easy go. It doesn’t help that the changes came so abruptly though, and the way in which they were communicated will leave a bitter taste in many Chope users’ mouths.

Aaron Wong
Aaron founded The Milelion to help people travel better for less and impress chiobu. He was 50% successful.
Previous article
Why doesn’t DBS have a $120K card?
Next article
IHG offering 100% bonus on points sales; new PointsBreaks list out

What do u recommend for redemption? Miles?

I think the “we heard you” was for restaurant owners rather than users.

Are miles redemptions a good value? There’s no change to those right?

given how easy it is to earn krisflyer miles in singapore, i’d much rather use my C$ for dining

Several people asked above about miles redemption. It’s also been limited/nerfed/semi-kiboshed a couple of moths back when Chope announced that users can only redeem for miles once a month. The rate of redemption remains unchanged, which is 1,200 Chope Dollars for 1,000 KrisFlyer miles.

I think we should empty our chope dollars to discount codes, extending them by 3 months. Thereafter, we have another 3 months to use them without min spend.

Well talking to a couple of the restaurants after we made a Chope booking, they explained that the establishment has to pay Chope per booking completed, whilst the Chope Dollars are actually funded (I think they said) 100% by Chope. So when you make a booking, we were advised to them buy the Chope voucher discounts, cos Chope covers the costs to the restaurant. Maybe Chope realised it was costing them far too much? Anyway, we shouldn’t necessarily grumble… these discounts were something for nothing. Just by booking a table, we got a discount/aka freebie. These are indeed getting rarer… Read more »