Emirates is offering great Economy Class fares on its new Singapore to Penang route- award space not loaded yet.

This flight will be operated with a Boeing 777-300ER aircraft in a 3-class configuration. The flight schedule for this route is as follows: 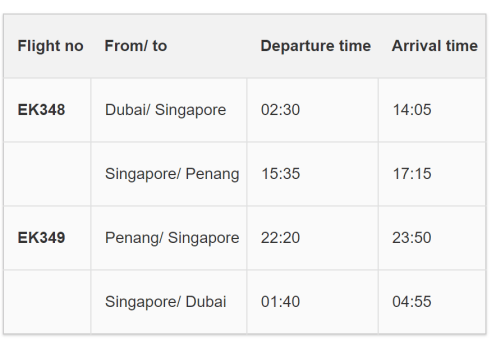 Currently, these are Emirates’ existing flights between Singapore and Dubai (Mar 2020 schedules):

After the launch of the Dubai – Penang – Singapore service, these will be the revised flight schedules between Singapore and Dubai (Aug 2020 Schedule):

I’m not sure if Emirates is running a sale to celebrate this new route but I have found some extremely cheap Economy Saver fares on Emirates which include checked baggage.

Here’s a sample itinerary for a weekend trip to Penang during the National Day long weekend:

Frankly, S$117 with 25 kg of checked bags and the ability to earn Skywards miles is a steal.

For comparison, here’s a similar itinerary from AirAsia (S$177) that does not include checked bags:

If you wanted an apples to apples (i.e full service to full service) comparison, here’s the same route on SilkAir (S$182) on the exact same dates with similar timings:

I’m not sure how long these incredible fares from Emirates will last, so book them quickly if you intend to head to Penang.

The new Qantas First Lounge Singapore opened last December to much fanfare. Its impressive decor and awesome dining menu makes it one of the best (if not the best) lounge in Changi Airport at the moment.

Emirates and Qantas have reciprocal lounge access policies so  if you’re flying on an Emirates ticket, you’l have access to a Qantas lounge and vice versa.

At the time of writing, award inventory for this flight has not been loaded onto the Emirates website or its partners (e.g Qantas) so I’m not able to tell you how many miles a redemption on this route will cost.

If for some reason you’re swimming in cash, a one-way First Class flight between Singapore and Penang will set you back a cool S$1,077. As the total flying time is just about an hour, I doubt a full meal service can be served so you are effectively paying S$1,077 for the chauffeur service and access to the Qantas First Lounge. 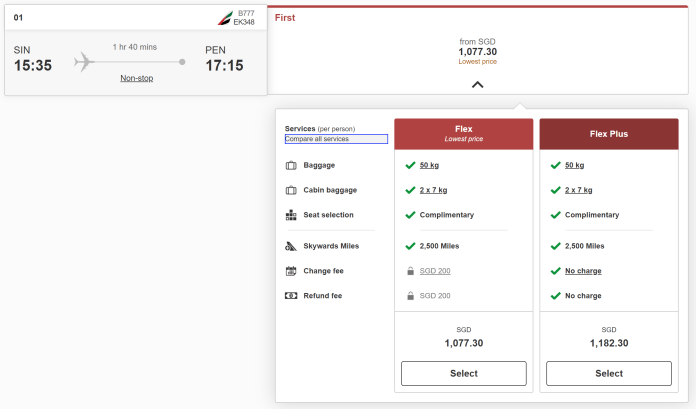 Business Class fares are around S$600 but it definitely isn’t as extravagant as Emirates First. Oh, and although it’s a B777-300ER serving this route, you can forget about trying Emirates’ new First Class. This bird has their old First Class product, which to be fair, is still pretty impressive today. You won’t find any onboard showers either- those are exclusively on the A380s.

Matthew Chong
Addicted to luxury travel while trying not to go broke, Matthew is always on the prowl for the best deals in the travel industry. When he's not busy studying, he can be found trawling the internet and reading up on credit cards, airlines and hotels. He also wouldn't mind taking you out on a date.
Previous articleWorld of Hyatt offering 25% off points purchases
Next articleDon’t want to travel because of the Wuhan virus? Here’s what you can do

You should be minimizing travel in view of the Wuhan Corona-Virus.

source: i heard it from my neighbour

Rather than buying a First one-way, it’s better to buy a return the with outbound in First and return in Economy Flex. Will be 862.10 SGD, thus cheaper than the one-way.
Still a crazy amount though for such a short flight.

Timing of Sin/Penang flight is not good enough to enjoy the Qantas lounge?

Some agent sites are offering fares for as low as $100 return after discounts!