Don’t want to travel because of the Wuhan virus? Here’s what you can do

Airlines and hotels are offering travel waivers for China, but what if you're going elsewhere?

In light of the ongoing Wuhan virus scare, numerous countries have issued travel advisories against all but essential travel to mainland China. Most major airlines (including Singapore Airlines) and hotel chains are also waiving cancellation and change fees for flights and stays in China.

If you’re holding paid or award bookings for travel to China, it’s a straightforward matter of contacting the provider to arrange a refund, or falling back on your travel insurance in the rare case that a refund isn’t granted.

However, what happens if you’re not going to China per se, but still feel uneasy about travelling in general during this period?

If you’ve booked a regular KrisFlyer award (i.e. not a Spontaneous Escape one- see below for that), you could cancel your flight and get a refund of the miles. However, the cost can be up to US$75 per ticket. That’s still ok for a single traveler, but less economical for a family of four.

It’s much cheaper to change your dates instead, but the problem is that unless you can nail down your future travel dates right now, you might end up paying two change fees- one to move your upcoming flight to an arbitrary date in the future, and another to move it to the actual date once plans firm up.

To avoid paying two change fees, ask KrisFlyer customer service to open date your booking. This cancels your existing itinerary, but does not require you to pick new travel dates straight away. You can call back later to confirm the new dates, so long as they’re within the ticket’s validity period. The ticket will then be reissued, and you’ll pay the relevant change fee.

A word about open dating: this is a classic example of the need to HUCA (hang up, call again). I recently called to open date a ticket, and the first two CSOs adamantly told me that KrisFlyer had a new policy which did not allow award tickets to be open dated. On the third attempt, the CSO told me “no problem”, and a few minutes later I received an email confirming my itinerary was cancelled, and reminding me of my e-ticket number for future rebooking.

You can’t open date a Spontaneous Escapes award- that goes against the very nature of the promotion. That would be like booking a 50% off eatigo reservation for 4 p.m, then asking to dine at 7.30 p.m instead.

Your options then are to fly as per normal, or don’t fly and forfeit your miles (unless you have “Cancel For Any Reason” travel insurance, see below). I have heard anecdotal reports of people asking to move Spontaneous Escapes awards beyond February, and being told that they’ll have to pay the difference in miles. I can’t confirm if that’s standard policy, but if it is I’d say it’s more than reasonable.

Hotel bookings are a lot simpler, because whether you’re paying with points or cash, most properties don’t charge you anything to change or cancel your booking, provided you’re outside the no changes/cancellation period. This is normally 24-48 hours before arrival, but can be up to a couple of months at some popular resort destinations- be sure to read the fine print!

It’s different if you’ve booked a non-refundable rate, or are inside the no changes/cancellation period for award bookings. In that case, you’ll need to hope the hotel is nice enough to accommodate you (or rather, not accommodate you, as it were), or else rely on “Cancel For Any Reason” travel insurance.

“Cancel For Any Reason” travel insurance

Since the MFA has not issued a travel advisory about travel outside of China, your regular travel insurance won’t cover you if you decide to cancel your trip.

However, there exists something called “Cancel For Any Reason” travel insurance that can come in handy here. To my knowledge, Aviva is the only provider in Singapore who has this- please sound out if you know of others. 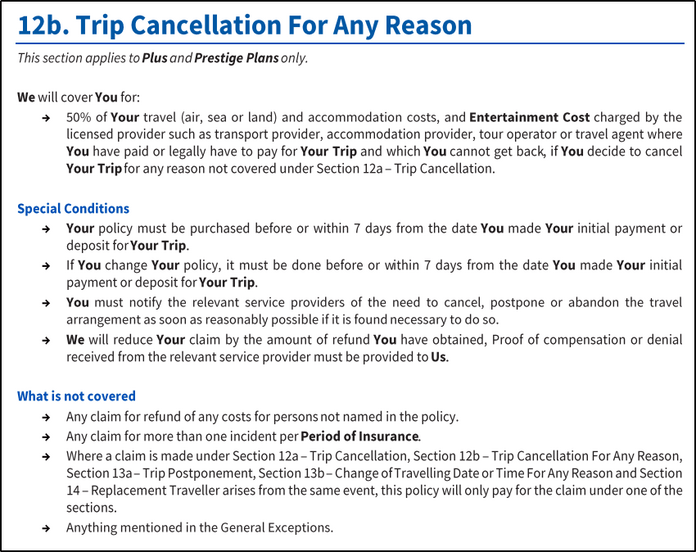 Aviva’s Travel Plus and Travel Prestige insurance plans have “Trip cancellation for any reason” coverage of up to S$5,000. This allows the insured person to, up to a maximum of once per policy year, cancel a trip for any reason and get 50% of the travel, accommodation and entertainment costs covered. It’s not ideal to get only 50% of your money back, but that’s the price you pay if you’re resolute not to travel.

Where it gets a bit more interesting is that Aviva’s travel insurance covers miles and points too, so if you’ve booked a Spontaneous Escapes award and can’t get a refund of your miles, you’ll be paid 50% of the retail price of the ticket.

I don’t need to tell you that 50% of the retail price of a Business Class ticket will almost certainly be worth more than the miles you paid, so some people might even come out ahead here.

Note that this only covers situations where the loss of points cannot be recovered from any source- if you’re booked a regular award ticket, you can recover your points by paying the cancellation fee, so this coverage won’t apply.

Frankly, I personally have no issues traveling outside of China. I’d take sensible precautions and practice good personal hygiene, but otherwise I don’t feel any more uneasy about traveling now than I did six months ago.

I get that the Wuhan virus is a new and unknown strain, and has the potential to mutate into something more deadly, but from what I’m reading the fatalities so far have been among the elderly and those with compromised immune systems– not unlike the common flu. For the sake of perspective, the common flu kills 12,000-61,000 people each year in the USA alone, yet you don’t see the same kind of panic. In any case I’m no doctor, and would defer to the advice of the experts on this. They say it’s fine to travel while avoiding China, and that’s what I’m inclined to do at the moment, barring any new developments.

Of course, everyone weighs their decisions differently, and if you’re traveling with the elderly or young children, that’s worth taking extra precautions. Ultimately, there’s no point going on a holiday if you’re going to spend the whole time worrying about falling ill, so if this is something that keeps you up at night, hopefully this article informs you of your options for cancelling or postponing your trip.

Thanks Aaron for this. I was discussing with my wife just an hour back about our upcoming trip to Maldives (mid Feb). Conrad has a cancellation period of 3 weeks prior to stay, and we crossed it by a day. Need to call them and see what options we have.

For Spontaneous Escape redemption tickets, we would have to top up the difference in miles in order to change the dates, and koff up then the change fees. I clarified this just 2 days ago with the CSO while cancelling my award tix.

yup, and that sounds quite fair in the grand scheme of things. they’re not saying “either fly or lose your miles”- they’re offering to let you use the miles spent as a credit towards a future award.

Restricted to only China now.

Unfortunately the cancel for any reason policy must be bought within 7 days of the initial payment :(((

Don’t just cancel online and incur the cancellation charges, do drop them a call, i managed to get my Taiwan trip refunded in full, miles and all after speaking to the customer service officer.