Official: Staycations not yet allowed in Singapore’s Phase 2

Staycation seekers will have to wait a little longer, as the STB clarifies who hotels can accept in Phase 2.

While Singapore will be transitioning to Phase 2 of its reopening from tomorrow, we’ll have to wait a little longer for staycations to resume.

In a circular issued by the Singapore Tourism Board (STB), hotels were instructed not to accept reservations from local residents unless they fell into a specific category of permitted segments.

As per the STB, hotels can only accept reservations from the following groups:

In other words, staycations in Phase 2 won’t be happening for now. To avoid confusion, the STB has advised hotels not to promote staycation packages in the interim. I guess it means we won’t see any deals like this in the near future then…

On the bright side, although Phase 2 staycations may not be on the cards, F&B establishments in hotels may resume dine-in services.

These will be subject to the same regulations as restaurants outside of hotels, i.e. no liquor sales and consumption from 2230, and no live music, or video screenings. Club lounges in hotels may also reopen.

It’s been clarified that even though bars in general must remain closed at the start of Phase 2, those located within hotels are permitted to resume operations. This means you should be able to visit Anti:Dote or the Conrad Lobby Lounge, for instance.

Just like spas in general, spas within hotels may reopen during Phase 2. They will be subject to extra precautions, such as single-use massage oils and creams, and new towels and bedding used for every customer (I certainly hope that was already the practice!).

Although spas are officially allowed to operate, not all of them will reopen immediately, and it’s best to check with the one you had in mind. 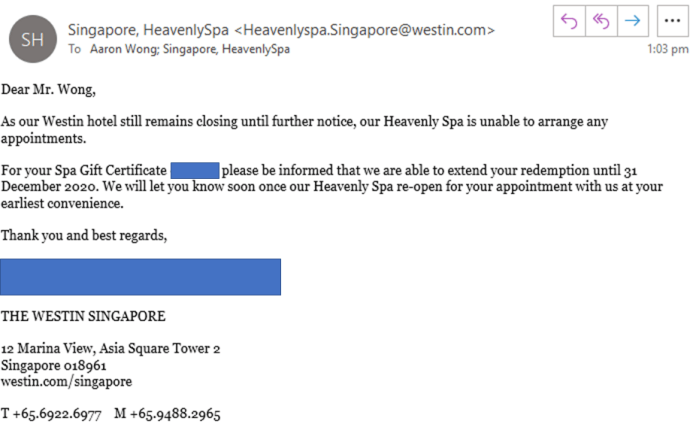 For example, I emailed the the Heavenly Spa at The Westin Singapore to book a date in July, and received a reply today that they would still be closed until further notice.

Shared facilities in hotels will reopen, although hotels will need to stagger timings for their use and ensure safe distancing measures. Kids club and play area will remain closed.

As an aside, this has to be the most awkwardly-worded FAQ of them all. Gotta deal with those unreasonable locals!

I’m sure many of us were looking forward to staycations in Phase 2 (I certainly was), but let’s look on the bright side: there’s still a lot of things we can do from tomorrow that were mere fantasy a month ago.

Besides, the STB hasn’t ruled out staycations in Phase 2. It’s more likely there’s an unspoken Phase 2A and 2B, and staycations fall into the latter. It’s in the interest of the economy as a whole that local residents start pumping money in via staycations, so I’m sure these will be permitted as soon as it’s safe to do so.

As mentioned earlier, hotels have been advised against advertising staycation packages in the interim, so we can expect developments here to die down for a while. Once the moratorium is lifted, however, I’m sure we’ll see plenty of deals. I’ll be covering any interesting ones, and you can also bookmark this SHA staycation deals page.

Given the fully booked nature of places such as haidilao, I’m expecting circuit breaker 2 instead of phase 2b.

Given the impact it had to multiple industries and the number of companies closing down coupled with the unemployment rate, if CB2 happens we will be looking at 15% GST soon.

TBH, staycations meet all the requirements for phase 2. My guess they are not allowed is because many hotels are still being used as SHN and quarantine facilities.

What if you’re on a short-term visa staying with a friend? Can you rent out a hotel for the weekend to have a staycation then?