Dusit Thani is now taking bookings for its first-ever Singapore property, in a rather unconventional location. Room rates from S$334 nett.

2020 probably isn’t a great year to open a hotel, but that’s not stopped Dusit International from ploughing ahead with its plans to open the Dusit Thani Laguna Singapore, their first-ever property here.

The hotel is set to soft-open next week, with reservations open from 4 December 2020 onwards. 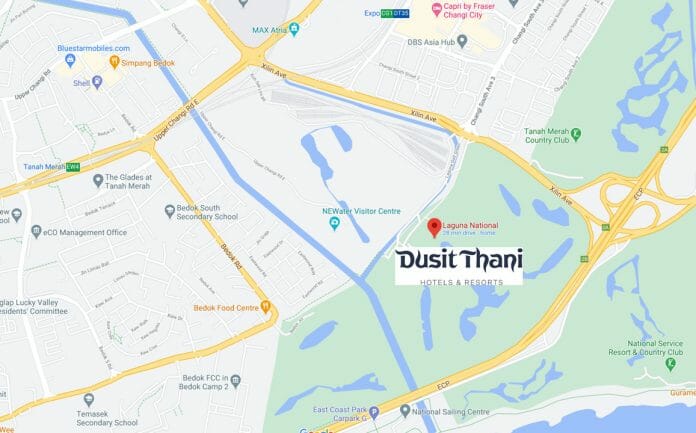 As the name suggests, the Dusit Thani Laguna Singapore will be nestled within the grounds of the Laguna National Golf & Resort Club, roughly 10 minutes from Changi Airport and 15 minutes from downtown. This country club used to operate a hotel of its own, although the reviews were solidly mediocre. Hopefully all that will change with the involvement of Dusit International.

The building looks more like an airport terminal than a hotel actually, and owes its architecture to Italian design studio Mercurio Design Lab. The original plan was to keep the traditional clubhouse with its pitched roof, but a third of the building had to be relocated when the government announced plans for a new MRT line (presumably the Sungei Bedok station on the upcoming Thomson-East Coast Line), paving the way for a more radically different design.

In the words of Mercurio:

This was an opportunity to develop something far more exciting and less constrained by the “boxy-looking” existing building. The result was a dynamic, unified building ─ a single form whose image combines the uniquely surging landscape of the golf course with the powerfully graceful swing of a golf club. Although the original clubhouse was retained along with most of its functional organisation (for example, location of the golf cart storage, the golf tours starting point, locker rooms, changing rooms etc.), it is now part of a single form defined by the over-arching roof and a shared, glazed façade.

All rooms and suites will either have city views or pool views. Standard amenities include:

Guests will enjoy free parking, a gym, and access to three swimming pools. Bicycles/e-Bikes will be available on request, and three outdoor tennis courts will open in Q1 2021.

In terms of dining options, a total of four dining concepts will be available:

The GM of the Dusit Thani Laguna Singapore will be Eric Piatti, formerly the GM at Swissôtel Nai Lert Park in Bangkok. Portfolio Magazine has put together a short interview with some additional insights, for those who are curious.

To mark the opening of the Dusit Thani Laguna Singapore, the hotel will be offering the following Discover Dusit rate that includes:

This rate requires full prepayment and is non-refundable.

I’ve looked through the rate calendar all the way up till November 2021, and the lowest rate I see is S$315++ (S$371 nett)- expensive for an out-of-CCR hotel, but then again it’s the Dusit Thani. 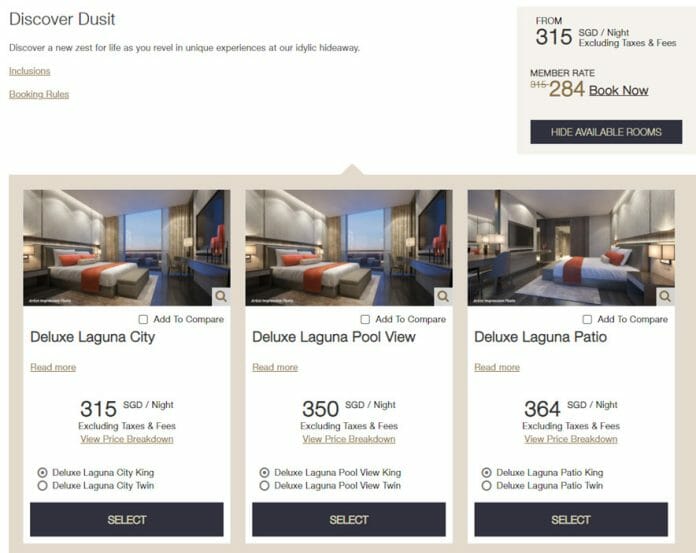 There’s a further 10% off all rates for Dusit Gold members, which would bring the price down to S$284++ (S$334 nett). However, I can’t find a sign-up link at the moment, which I suspect is because the program is about to be relaunched as DusitLife. I expect we’ll hear more news about this soon, but members can expect to save 10% off room rates and spa treatments, and 20% off F&B and laundry services.

From opening till 31 January 2021, only Deluxe Laguna and Deluxe Laguna Patio rooms are available for booking. From 1 February 2021, club rooms open up, and from 1 May 2021, suites open up.

It looks like club rooms will cost S$139-169++ more than base level rooms, although it remains to be seen what additional perks members can expect and when the club lounge proper will open.

I stayed at the Dusit Thani in Bangkok a long time ago, and while I don’t remember all that much, I’d certainly be interested in rediscovering the brand.

While its location may not be ideal for those who want to be in the heart of the action, it could be a nice alternative getaway to Sentosa. There is generally a lack of quality accommodation outside of the Orchard, CBD and Sentosa areas, so it’s always nice to see a high-end property opening in a lesser-visited place.

Wonder if Dusit Thani has missed a trick with this so-called opening “promo”? The hotel has virtually no brand presence or heritage in Singapore, located in a non-CBD area and charging 315++ for a 36 sq m room, albeit with bfast included. The Four Seasons (just as one example) also offers bfast, a much larger entry level room (49 sq m) and superior location for just a tad more at 335++. I believe under current Hilton Honors sales promo, one can also get a Club Exec room (40 sq m) at the Conrad for about 330++ or so? No 30%… Read more »

It does seem as though they have been poorly advised. I’ve frequented Laguna National as a guest and the location has absolutely nothing going for it.

perhaps they’re hoping the dusit brand will be familiar enough to travelers here, or they’re angling for the “anywhere but orchard/cbd/sentosa” crowd.

The other problem with this is that hotel guests seemingly have no chance of playing at either of the two golf courses. Why would I stay next to two golf courses in the middle of nowhere (For Singapore) if I am not allowed to play on them?