Leisure travel to Hong Kong is off the table for 2020, as a fourth wave of COVID-19 cases leads to a further postponement of the ATB.

Just two weeks ago, hopes were high for inaugural Air Travel Bubble (ATB) between Singapore and Hong Kong. Flights were snapped up, hotels were booked, and it looked like there might be travel for Singaporeans yet in 2020. 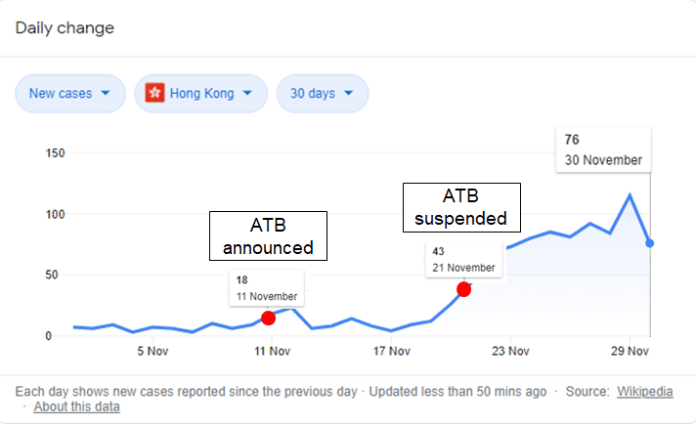 But it all unraveled rather quickly, as a spike in Hong Kong’s COVID-19 cases led to a last-minute suspension of the ATB. The initial postponement was for two weeks, but given the nature of a COVID-19 outbreak, that was always a highly optimistic projection.

So it’s not really a surprise that the authorities have announced a further suspension to the ATB. The ATB will no longer happen in 2020, and a revised start date for 2021 will be announced later this month.

“Singapore and Hong Kong have further reviewed the COVID-19 situation in Hong Kong, and given that local unlinked cases are still high, both parties have decided to defer the commencement of the Singapore – Hong Kong Air Travel Bubble (ATB) to beyond December 2020. The exact start date of the ATB arrangement will be reviewed in late December”

What about ticket refunds?

Both Singapore Airlines and Cathay Pacific are offering full refunds to ticketholders on ATB flights, with no penalty fees. Alternatively, you may choose to rebook a different date with a waiver of the change fee, although a fare difference may apply.

Singapore Airlines passengers can submit a refund request via this form, or contact the airline if they wish to change their travel dates. If their booking was made through a travel agent, all refunds/changes must be done through the agency.

Similarly, Cathay Pacific passengers can request a refund of their ticket via the Manage Booking option. There’s also the option to exchange your ticket for Cathay Credits (why though), or rebook to a different date.

I was originally scheduled to fly the inaugural ATB flight on 22 November 2020, and when the postponement was announced, I moved the flight two weeks later to 7 December 2020. I always knew it was a long shot though, given how the Hong Kong cases were escalating.

Since December is now out of the question, I looked at options in January. Remember: from 1 January 2021, the ATB flight switches from SQ890 to SQ860, so you’ll need to look out for that flight. 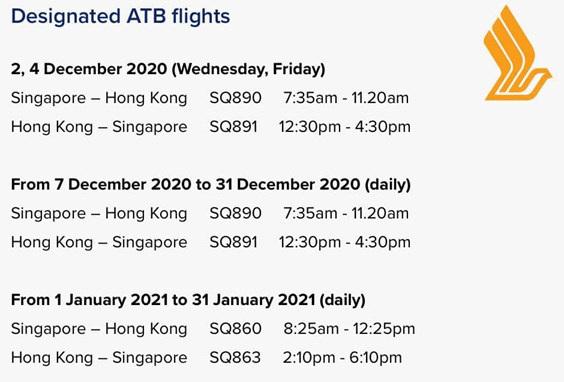 Ticket prices to Hong Kong have risen significantly since I snagged a S$572 fare on the day the ATB was announced, and I didn’t fancy shelling out another S$200 or so. However, I noticed that Economy Class award space was wide open in January, so I decided to take a punt on these dates: 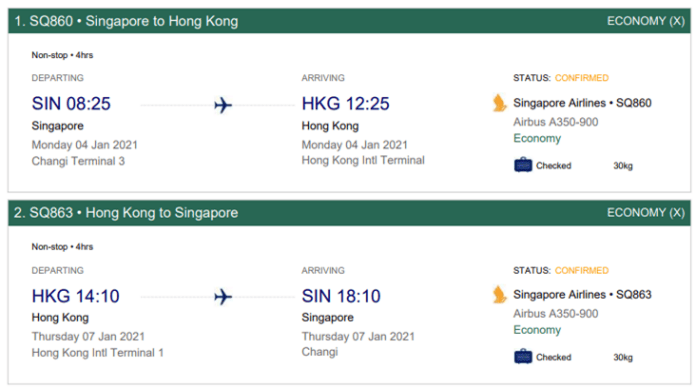 In an ideal world, I’d be able to do Business Class on the outbound leg and Economy Class on the return so I can review two different experiences. However, Business Saver is on waitlist, so I’ll have to be patient and see how that plays out.

To be clear: 4 January is a shot in the dark. There’s no way of knowing what the situation will be like by then, and I wouldn’t hold my breath. But in any case, I’ll wait for the official announcement and try to move the dates accordingly- the goal is still to fly the inaugural.

The other potential spanner in the works is I’m scheduled to go on my first-ever cruise at the end of January (more on that later). However, Royal Caribbean has added supplementary terms stating that anyone who has travelled outside Singapore less than 14 days prior to boarding will not be allowed to cruise. Again, there’s no point worrying about this until there’s some clarity on the ATB, but it’s something I might have to juggle.

While it’s obviously not ideal how the ATB has turned out, there’s very little to complain about. I’m thankful life here now has some semblance of normality, where we can dine out, go to theatres, do staycations and even cruise. Air travel would have been the icing on the cake, but let’s not get ahead of ourselves.

I do wonder whether we might see an ATB with another country pop up before Hong Kong though, at the rate things are going…

Aaron Wong
Aaron founded The Milelion to help people travel better for less and impress chiobu. He was 50% successful.
Previous articleOCBC VOYAGE promotion: Earn 3 mpd on foreign currency spend and 2.5 mpd on dining
Next articleBuy Shangri-La Golden Circle points with a 50% bonus (and save 30% off F&B)

Aaron – I am curious. Will you be in the queue to be vaccinated if that makes travel easier?

I really hope not. The official sources all stated that it won’t be mandatory. And even after Qantas made that stupid statement, I still doubt that all airlines will go down that road. Especially in the west people don’t like to be forced.

Hi Aaron, if you rebook the flight you got to incur the insurance of $57 right? If atb cancelled or doesnt fall on that day, can you get a refund?

yes, can be fully refunded

Hi Aaron will the miles gained from the ticket booking be clawed back if the refund happens?

well yes, as they will with all refunds.

Aaron your writing is great. In times like these I think you could consider writing about practical financial/investment advice. The typical RM’s you get with the affluent credit cards you write about provide weak or zero advice. I think luxury travel via miles and prudent financial advice go hand in hand.