Cathay Pacific brought back fuel surcharges on 1 Feb 2021, with another hike happening from March. Here's the implications for Asia Miles.

Back in May 2020, Cathay Pacific removed fuel surcharges from virtually all its tickets, a huge boon for Asia Miles members (or those redeeming miles from partner programs which didn’t absorb them, like British Airways Executive Club).

Unfortunately, it seems that Cathay Pacific has rolled back its policy less than a year later. I’m a bit late to the party on this one, but towards the end of January, Flyertalk users spotted that Cathay Pacific would once again collect fuel surcharges effective 1 February 2021.

Here’s an example from a (hopefully ATB) flight from Singapore to Hong Kong:

I was under the impression that Cathay Pacific had done away with fuel surcharges permanently, so I reached out to a spokesperson to find out why the U-turn. I received the following response:

With fuel price increasing globally, the fuel surcharge are re-introduced with the sale of each air ticket. The award / redemption flights surcharges are in line with the commercial / revenue tickets.

The good news is that the fuel surcharges are fairly mild for the moment. Passengers flying on Cathay Pacific out of Singapore should expect to pay at most US$76.60 (US$98 from 1 March 2021) more per person, regardless of cabin.

The full list of fuel surcharge updates can be found here, but for those of us based in Singapore, these are the two main things to note:

To illustrate, I previously showed that the fuel surcharges on a SIN-HKG round-trip itinerary were HKD 110. That’s roughly equivalent to US$14, or 2 x US$7 as shown in the table above.

Fuel surcharges are applied by sector, so if you fly from SIN-HKG-X, you’ll pay both SIN-HKG and HKG-X. For example, if I wanted to fly from SIN-HKG-SFO, I should expect to pay (US$7 + US$31.30) x 2, or US$76.60. Indeed, that’s roughly equivalent to the actual HKD 598 priced out by the Asia Miles award engine. 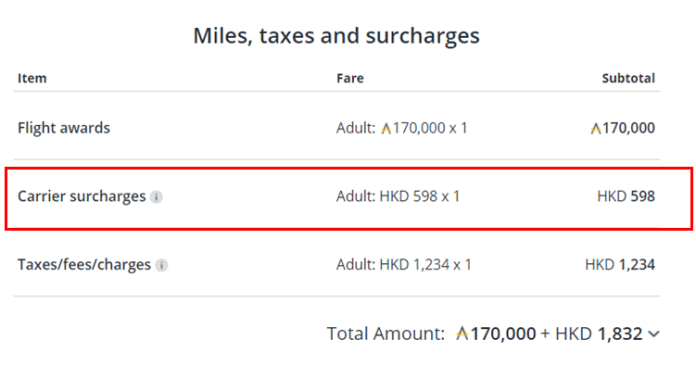 If I were to summarise the changes:

Remember, the fuel surcharges depend on when you issue your ticket, not when you actually fly. In other words, provided I issue my ticket on/before 28 February 2021, I’ll avoid the 1 March 2021 surcharge increase (it follows that any tickets issued before 1 Februray 2021 are safe from the changes, and Cathay Pacific won’t come after you for additional money).

By that same logic, if you waitlist yourself on/before 28 February 2021 but your waitlist only clears after this date, you’ll pay whatever the prevailing fuel surcharges are at the time of ticketing.

Provided you were OK with a stopover in Hong Kong, you could save up to 54,000 miles on a round-trip Business Class itinerary between Singapore and selected European destinations.

How does that change, now that fuel surcharges are in the picture?

For European destinations, Asia Miles awards now involve an additional cash outlay of ~S$178 (S$102 from fuel surcharges, plus S$76 of airport taxes from the transit in Hong Kong), a figure that will increase to ~S$206 from 1 March 2021.

In exchange for this, you save either 14,000 miles or 54,000 miles, depending on which city you’re going to (Asia Miles’ award chart has a 7,500 mile boundary line- slip to the wrong side of this, and your award cost jumps). 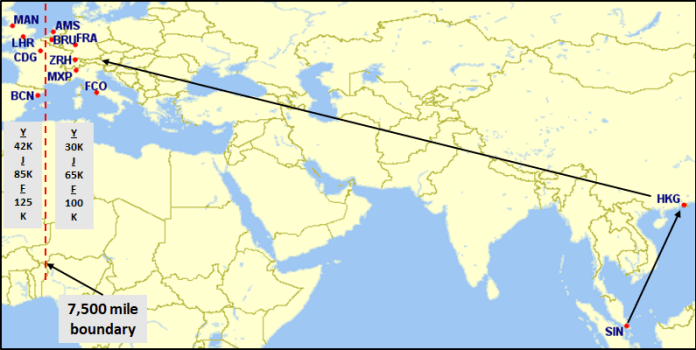 I think it’s somewhat marginal to save 14,000 miles in exchage for the additional cash outlay, especially when you factor in the additional time taken to transit in Hong Kong. However, I certainly think it’s still a good idea to save 54,000 miles, so Asia Miles awards will retain their attractiveness in that scenario.

Ultimately, you’ll have to figure out how much you value an Asia Mile (1.5-1.8 cents seems a good figure in my book), and do the math to see whether the miles saved justify the additional cash (and time taken to transit).

The reintroduction of fuel surcharges so soon after Asia Miles’ 15% transfer bonus feels like a bait and switch- I’d be more wary of transferring miles across if I knew that fuel surcharges might reappear.

It’s also a shame that the no fuel surcharge period coincided with an unprecedented moratorium on global air travel, so I doubt too many people actually got to take advantage of this (unless, of course, you locked in travel for a future date prior to 1 February 2021).

The only silver lining here is that Cathay Pacific’s fuel surcharges aren’t insane the way certain other airlines’ are. Let’s hope that stays the case.

so angry they did this after the 15% transfer bonus. dick move.

fuel surcharges are a scam.