Singapore Airlines has added a new category of "Promo" awards, which has led to talk of a KrisFlyer devaluation. I'm not so sure.

Singapore Airlines has added a new category of KrisFlyer flight redemptions known as a “Promo” award, which will be non-refundable and non-changeable.

Some may see this as a harbinger of devaluation, but I’m not so convinced.

How to find Promo awards

There’s no official announcement concerning Promo awards, nor will you find any references in the KrisFlyer T&Cs or the “redeem miles” section of the KrisFlyer website (which continue to reference Saver and Advantage awards only).

In fact, Promo awards can’t even be booked yet. To find this hidden award category, do a redemption search as per normal. You’ll initially see the usual Saver and Advantage awards.

But click on “Compare award types” and a comparison window pops up. 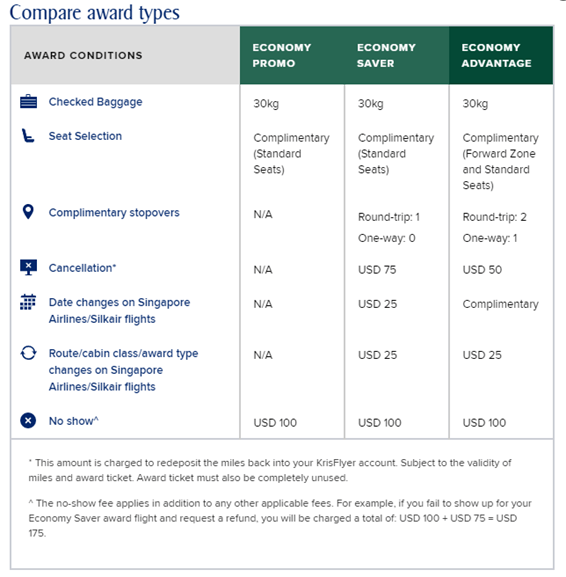 Hello what’s this, a third category of awards? Apparently so. The main difference of Promo awards is the complete absence of flexibility. These awards:

In other words, once you redeem one of these, you’re locked-in.

In case you were wondering, Promo awards also show up when you search for Premium Economy, Business and First Class space.

An award without flexibility should sound familiar to you, because that’s exactly what Spontaneous Escapes were.

Before COVID-19 struck, Singapore Airlines ran a monthly promotion called Spontaneous Escapes, with 30% off Economy, Premium Economy and Business Class awards to selected destinations. This was a way of moving last-minute unsold inventory- the awards required travel in the following month, and could not be cancelled or changed for any reason (well, they did make an exception when COVID worsened).

In that sense, the concept of a Promo award isn’t completely new to KrisFlyer; it’s just the first time we’ve seen a separate category hived out for it. Spontaneous Escapes awards, you may remember, were issued under the Saver category- they just had additional rules attached to them.

The addition of a new award category will invariably freak some people out, to the extent they see it as a forerunner for devaluation. I wouldn’t panic just yet though.

A common refrain goes “there’s so many unredeemed miles out there right now, and the easiest thing for the airline to do is devalue.”

First of all, it’s not so “easy” to devalue. Airlines have multi-million dollar contracts with banks and other third parties who purchase miles. Devaluations may impact the price at which they can sell miles, or the willingness of partners to buy them. I don’t know whether this is the case in Singapore, but in the USA, some agreements airlines sign with third parties include an undertaking not to devalue their frequent flyer program.

Second, as hard as it may be to believe, loyalty executives don’t sit around in boardrooms twiddling their thumbs and wondering how best to screw over customers next (well, unless perhaps you work at Chope). Devaluations aren’t done lightly; they lower the motivational aspect of a loyalty scheme (that award that I was eyeing now costs 40% more miles; what’s the point?), which can lead to decreased engagement and other behavior that adversely affects their KPIs.

Third, as raised during my discussion with Mark Mullinix and Nik Laming (folks who know way more about loyalty programs than I do), there’s simply no devaluation pressure now. Devaluations happen when people redeeming miles start competing for seats with people paying cash, and IATA doesn’t think load factors will recover anytime soon.

Some may point to the recently-launched Hong Kong ATB as an example of a capacity-constrained route that SIA would surely rather fill with cash paying passengers than redemption bookings, but we need to remember the capacity constraint is only temporary. The ATB starts off with just one Singapore Airlines flight (capped at 200 people) every other day, but assuming the bubble proceeds without further incident, it’s natural that additional capacity will be approved.

In fact, while it’s difficult to redeem miles for the first month or so of the ATB, Singapore Airlines has kept award redemptions open for dates further out. It’s even possible to find Business Saver awards, if you wait till July.

Award inventory is based on how many seats the airline expects to go unfilled, so it stands to reason that even Singapore Airlines doesn’t expect interest to maintain its current sky-high levels for long.

Look. The thing about devaluations is that if you cry it enough, you’ll eventually be proven right. Of course there’ll be a KrisFlyer devaluation down the road, it’s par the course for these things. But I just can’t see it happening now, and certainly not as a pre-emptive measure before the first leisure flights even takes off (I’ve jinxed it, haven’t I?).

So if this isn’t a devaluation, what is it?

Well, we don’t know when borders around the world will reopen, but what we do know is they won’t all reopen at the same time. Reopenings will come in trickles, either directly as countries open up to specific partners through the formation of bubbles, or indirectly as they publish blanket conditions stipulating who’s allowed in (e.g based on type of vaccination).

Therefore it makes little sense to do a pre-COVID Spontaneous Escapes style promotion that covers 30, 40 cities at a time, because there may only be a small handful of places that Singapore residents can realistically travel to.

My guess is that this Promo award category has been created so Singapore Airlines can add short-notice, ad-hoc offers on one particular route without running a whole big campaign around it. Having a separate “Promo” label makes the offer easier to identify.

In fact, as counter-intuitive as it may sound, hiving out a separate category of discounted non-flexible awards might be good for flexibility as a whole.

To illustrate, suppose that during the pre-pandemic days I wanted to book an award ticket to Hanoi for travel next month. However, Hanoi also happens to be featured under Spontaneous Escapes. That’s good for me if my plans are 100% confirmed, but otherwise, I don’t even have the option to book a “regular” Saver award.

Adding a Promo award category will therefore address this issue. I can go for the cheaper option, or pay slightly more if I want the regular Saver flexibility.

The main problem with this theory is that First Class awards were never available under Spontaneous Escapes, so why has a Promo category been added here too? I can’t explain that, but I’m still convinced this is what’s happening.

So fine, let’s consider the other scenarios:

(1) would be fairly innocuous, (2) is a partial devaluation, and (3) is a pure devaluation (because you now pay the same for less flexibility).

Part of the reason I have difficulty seeing a three-tier award chart is because Singapore Airlines had it in the past, before going to a two-tier system in May 2016 by eliminating Full Awards. Keeping three different award charts for the same destination is just confusing, and even Cathay Pacific has moved in the opposite direction. 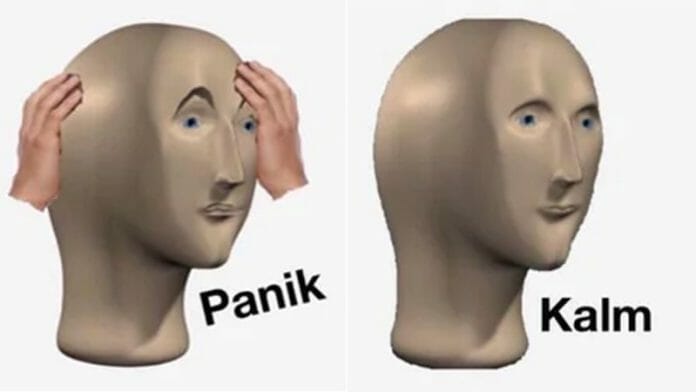 It’s indeed odd to be introducing a new award category with less flexibility in a time like this, but I don’t think there’s reason to read too much into it for now.

I think Singapore Airlines is simply laying the groundwork for the eventual return of Spontaneous Escapes style promotions, or whatever they’ll be called going forward. Having a separate award category makes it easier to distinguish these awards and their different rules, reducing customer confusion.

I like your optimism and non generalist take on this. Mainly miles who first reported this took the pedestrian route and started warning to no end of devaluation.

Exactly. When air travel comes back I believe it will definitely become the 3rd scenario Aaron has mentioned, just a matter of time. And the example of US market – I think most devaluation news are from loyalty programmes there? LOL

i think people need to remember that devaluations are non-cash generating events. at most, the airline recognizes some revenue from past sales of miles, but that’s an accounting exercise for which the cash has already been received. therefore, the main financial advantage of devaluation would be to shore up the balance sheet, perhaps if you needed to raise capital…but SQ’s already got its multi billion lifeline from temasek.

Hi Alan, I like your point of views as well as sounds convincing to most of the readers in SG..

I think Promo First could be a good new category. Perhaps while SIA may not want to make campaigns in Spontaneous Escapes to have “Promo” first class tickets due to brand equity, it still makes sense for them to offer unoccupied seats quietly at last minute discounted rates to the lucky traveller.

They have been running some promo’s in other markets – at least out of London we had a 50% off J sale to Thailand that was completely non-flexible. But it was confusing once you went into the buy progress & it’s marked as Saver so your theory makes sense that they want a better way to sell these ad-hoc / targeted offers in the booking flow

Actually I’m muddled up – https://insideflyer.co.uk/2021/03/50-off-some-singapore-airlines-krisflyer-redemptions-from-london-including-business-class-ends-soon/ there is a screenshot here – they were using the “Promo” banner

this is very interesting, and strongly suggests there’s no devaluation to speak of. thanks for linking it, i’ll update the post to feature this info

I feel there are too many “chicken littles” who are perpetually worrying about devaluation. Most of these people are clueless about running a multi-billion dollar business. Of course they will *eventually* be proven right – but not in the near future. In times of crisis, a *loyal* customer base makes a huge difference in a company’s survival and recovery. If SIA’s management is competent, the last thing they’ll want to do is devalue the billions of miles KF members have in their accounts and p*ss everyone off. The various extensions and promotions to encourage members to “earn” or transfer miles… Read more »

took the words out of my mouth!