Last Month’s Spontaneous Escapes saw the biggest discounts ever offered: 51% off selected Business and Economy Class awards. It was an amazing opportunity, with Frankfurt, Milan, Rome, Barcelona, Tokyo, Nagoya, Osaka and many more destinations up for grabs.

And then COVID-19 happened.

Since then, Singapore Airlines has announced it would waive change and cancellation fees for flights to and from mainland China, both for cash and award tickets. But what if your particular destination isn’t covered by the travel waiver policy? 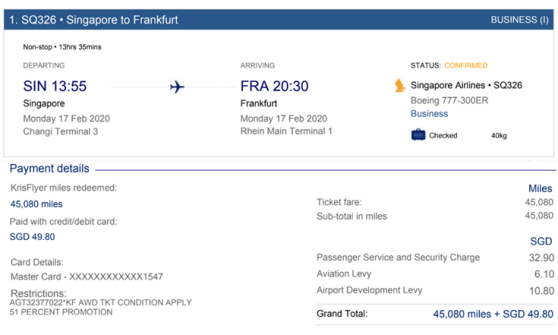 Last month, I snagged a SIN-FRA Spontaneous Escapes award for just over 45,000 miles in Business Class, a fantastic deal. My plan was to use this as a springboard to get to Europe, after which I’d review EVA Air’s B787 (one of the five cabins products I’ve resolved to review this year) from Vienna to Taipei, via Bangkok.

My journey would look something like this- the red lines flown with Singapore Airlines, the blue lines flown with a combination of Lufthansa (from Frankfurt to Vienna) and EVA Air (from Vienna to Taipei via Bangkok). 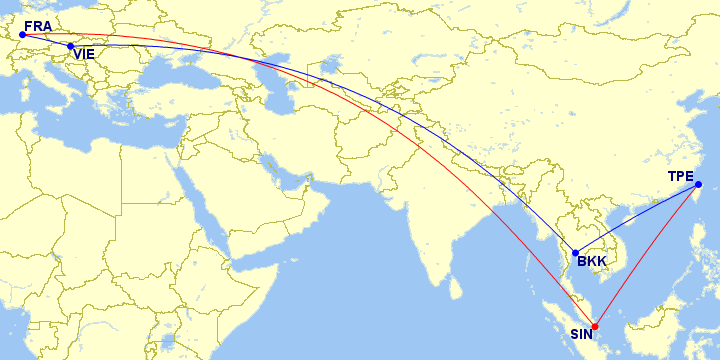 Given the current situation, however, I’ve gone off the idea of taking this trip.

For the record, I’m not afraid of the virus per se. Based on what we’ve seen so far, it appears to be no more deadly than the regular flu, and nothing to be worried about if you’re healthy and without any pre-existing conditions.

What I am afraid of is the abject hysteria that’s resulted. We’ve seen Royal Caribbean discriminate against people on the basis of their passport (as opposed to travel history, which would be a much more reasonable precaution; I know they backed down but the very idea was nonsensical), Chinese being racially abused overseas, Airbnb hosts cancelling reservations of guests who don’t even come from China, panic buying in the stores at home… all of which makes you think the problem isn’t the virus; it’s the people. It’s an altogether unfortunate situation that has brought out the worst in society, and that’s really sad (to be fair, it’s also created some truly heartwarming moments- mad props to the people behind this, please support them if the campaign opens again)

So as much as I don’t think the virus in and of itself is a reason to cancel travel plans, I do think the smart thing to do may be to lie low during this period. The last thing I want is to be given the side-eye by everyone when I so much as cough or sneeze in public, and there’s no legislating for what panicky people may do.

We all know the general rules of Spontaneous Escapes: strictly no changes or cancellations. It’s what I keep repeating every time the awards are released, and to be fair, that’s the only way this can work- Singapore Airlines offers discounted awards to fill seats that would otherwise have gone out empty. It defeats the purpose if people can cancel their tickets at the last minute.

That said, we’re in a bit of an exceptional situation right now, and I’d heard anecdotal reports that it was possible to cancel Spontaneous Escapes awards even to non-mainland China destinations.

I first tried calling customer service to request a refund, but both CSOs I spoke to were adamant that no refund was possible as Frankfurt was not covered by the travel waiver.  Then I tried emailing Singapore Airlines at their dedicated address to handle coronavirus-related enquiries ([email protected]), but received no response after 5 days.

So I decided to pay a visit to the service centre instead. Singapore Airlines’ service centre is on Level 4 of ION Orchard, and opens from 8.30 a.m to 6 p.m Mondays to Saturdays, and 9.30 a.m to 5 p.m on Sundays. 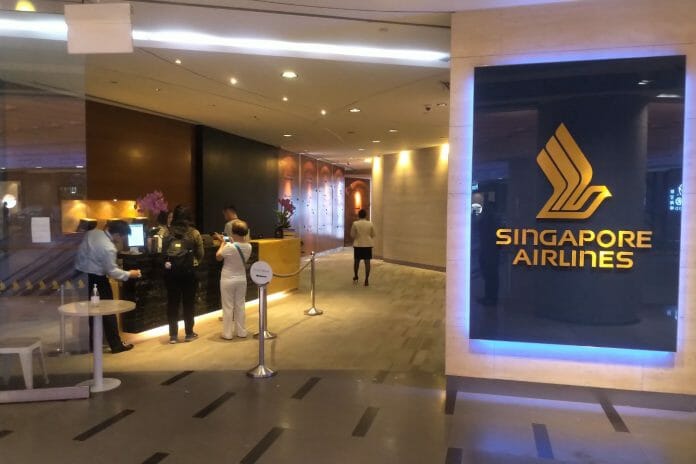 At reception your temperature is taken and you fill in a contact tracing form, after which you explain the nature of your visit and take a queue number. 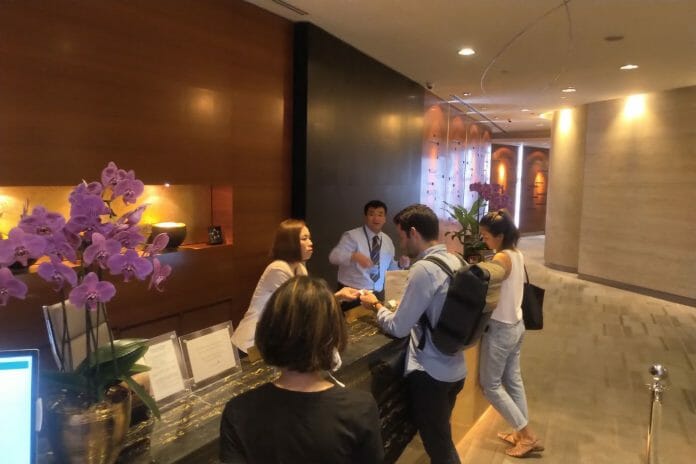 Interestingly enough, there is a priority queue for First or Business Class passengers (and PPS members). If you’re planning to visit, I do hope you’re not flying Economy- the gentlemen in front of me was quoted a wait time of 2 hours (I visited during lunchtime on a Friday). 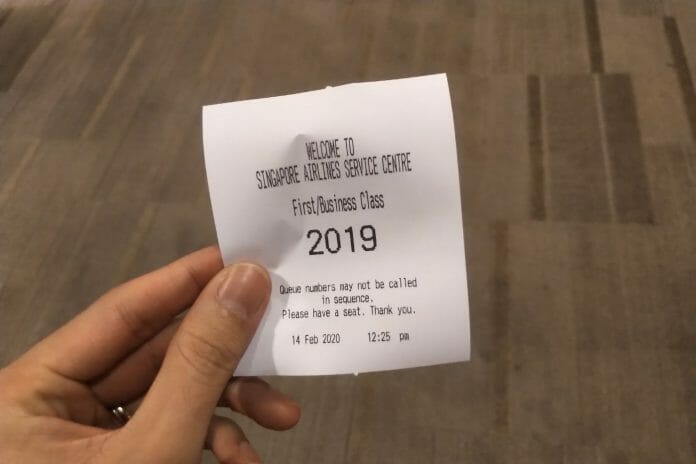 Because I had redeemed a Business Class award, my wait time was less than 2 minutes. In fact, I was next in the queue. 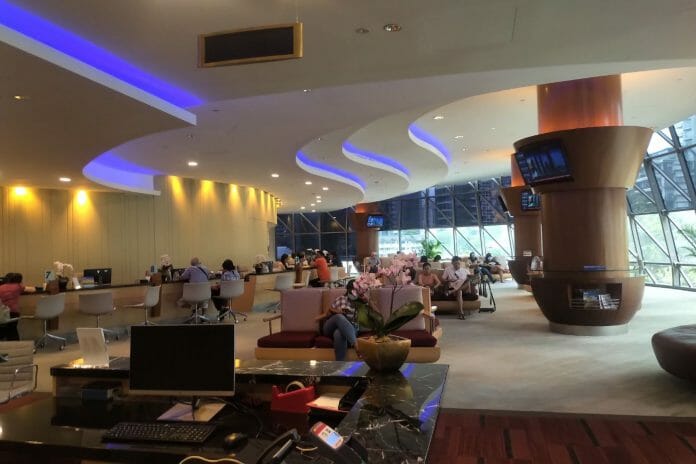 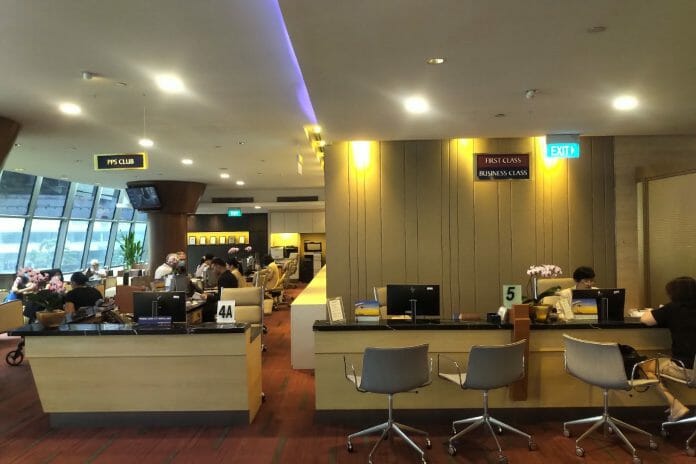 When my turn came, I explained to the CSO that I didn’t want to travel anymore given the current situation, and asked if he’d be able to refund the ticket. He explained that while Spontaneous Escapes awards were normally not refundable, they would make an exception and cancel the ticket for a US$75 fee (the same as a Saver award).

That’s more than reasonable, and if you’re granted a cancellation, please don’t be that guy who makes a scene and demands the US$75 cancellation fee be waived (it has happened, I’ve heard). The fact of the matter is, unless your award was to mainland China, Singapore Airlines is doing you a favor by agreeing to refund what by right should be a non-cancellable award.

What would I have done if I couldn’t cancel my ticket?

If I hadn’t been able to get the cancellation, I would have made a claim under the “Cancel for any reason” section of my Aviva travel insurance policy. This allows me to cancel a trip for any reason and get 50% of my costs back, up to S$5,000 and a maximum of once per policy year. 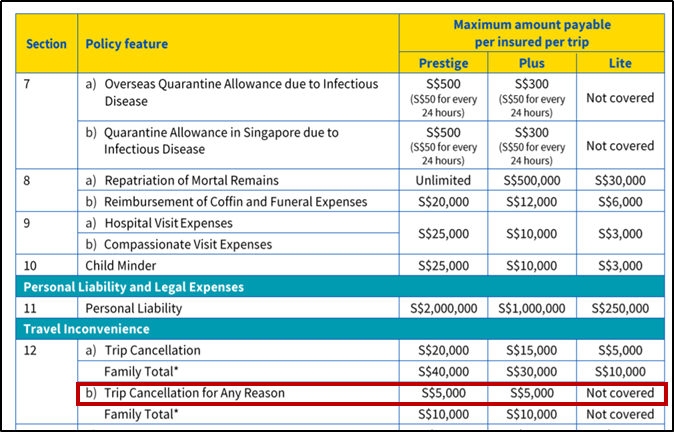 The SOP with insurance claims is that you need to make every reasonable effort to recover your losses, and Aviva specified that I needed a letter from Singapore Airlines confirming they were not going to provide a refund. So in going to ION, my goal was to either get a refund, or to get that letter.

Aviva Travel Insurance is one of the rare policies that covers the loss of miles and points, and they reimburse you based on the cost of a revenue ticket. To put things in perspective, a one-way Business Class ticket to Frankfurt would have cost ~S$4,340, so had Singapore Airlines refused to refund it, I might actually have made some money out of this. After all, 50% of S$4,340 (S$2,170) is worth much more than 45,000 miles (~S$810).

But it was never my intention to profit from this situation anyway, and I was more than happy to pay the US$75 and get my miles back. I also open-dated the Star Alliance award (Spontaneous Escapes can’t be open dated for obvious reasons), allowing me to do the EVA Air B787 review another time.

As I mentioned at the start, I don’t think we’ve reached the stage where you absolutely need to cancel your travel plans. However, I can also understand why people may be uneasy about traveling during this period, and ultimately there’s no point taking a vacation if you’re going to spend every minute worrying.

In my case, I’ve decided that I don’t like the current climate, and besides, I’ve already done one trip for the month– there’s still trip reports to write!

Has anyone else cancelled a Spontaneous Escapes award? What was your experience like?

I also booked the Spontaneous Escapes for both Biz class and Premium Economy. I was quite surprised to received refunds with any surcharges though. =)

Thanks for posting this very helpful tip.

Would like to check do they refund the taxes paid as well? And if they do refund, is it to the same credit card u used initially or any credit card/ other modes of refund?

Thank you so much!

taxes are refunded in full to the original credit card used

Thank you so much Aaron for your reply! 😊

Hi Aaron,
Thanks for the post. I did the same but didn’t get any email notification for the US$75 Refund fee. Did you?

in your case what may have happened is the taxes on your ticket were more than US$75. if so, the US$75 will be taken out of the amount refunded to your card.

Bought my saver flight worth miles in May last year. Can I buy the same Aviva insurance you have and then make a claim?

you cannot claim unless your miles are not recoverable. and you would have had to buy your policy before your redeemed.

Hi Aaron, may I know how to “open-dated the Star Alliance award”? Thought we need to fix a date just like Krisflyer?

I’ve email SQ about the same matter but i just have an economy class 😆. I havent received any answer till now (almost 5 day till now) Wish at least they allow me to reschedule into a safe date. But lets see 😎

you may try their online chat,they respond quite fast

I emailed and waited more than 5 days without any reply. So I headed to the service center at Ion. Managed to cancel sponganeous redemption tickets for japan. Cancellation Fee was waived for the elderly and paid USD 75 for my own ticket.

nice of them to waive the cancellation fee.

i think they were offering cancellations for feb, but not for march (the argument being that people should have “known” by feb that the situation was serious). that said, you’re right about the korea escalation. maybe worth writing to sq on social media?

Tks Aaron. Just went to ION to get my tkt to Turkey cancelled today. I went at lunch time, apparently there are now two queues, the first one outside the service center (abt 30 people In the line) is to get your queue number and take body temperate before you can enter the place. I was told there are 200 numbers for eco class taken and currently waiting ahead (not sure if it’s true, as I didn’t see 200 ppl inside, perhaps some ppl took the number and left). Luckily I had a biz class tkt so there was no… Read more »

my goodness, 200 people! they must be utterly swamped.

good that you didn’t have to wait too long, and maybe this is yet another reason why you should never redeem economy 😉