The Plus! Rewards program will be adjusting the earn and burn rates for LinkPoints come 1 August. Here's what to do before then.

While Plus! Rewards may seem like more of an auntie program, it’s one of the biggest loyalty schemes in Singapore with 2.3 million members and 1,000 participating merchants. What’s more, it also features points conversions with Asia Miles, BIG Rewards, GrabRewards and Park Rewards.

So when NTUC Link says it’s making some major changes to Plus! Rewards from 1 August 2021, you’ll want to sit up and take notice.

Here’s how the earn and burn rates for LinkPoints will change from 1 August 2021.

Plus! Rewards is adjusting the earn rate such that every S$1 = 0.5 LinkPoints, 75% less than right now. However, the minimum spend of S$20 that is currently required to earn points at FairPrice, Unity, Warehouse Club and Cheers will be removed.

But if you spend at least S$400 per month at FairPrice, Unity, Warehouse Club and Cheers, you’ll earn an extra 0.83 LinkPoints per S$1 that will be credited by the first day of the following month. In that case, your overall earn rate is S$1= 1.33 LinkPoints, yielding an effective rebate of 1.33%-  the same as right now.

tl;dr: anyone who does at least S$400 of grocery shopping per month will be in the same position as before.

If you have an existing stash of LinkPoints, you might think you’re looking at a windfall come 1 August 2021, but sorry to burst your bubble; your balance will not increase in value.

Even though the burn rate will be enhanced to 100 points= S$1 (vs 150 points= S$1 now), your LinkPoints balance will be adjusted to ensure the dollar value remains the same.

There is no change to the expiry policy for LinkPoints. All points earned in a calendar year will expire on 30 June the following year (31 December if you have an NTUC Plus! card).

Plus! Rewards has a wide range of earning partners, some of which support two-way points exchanges. From 1 August, the earn rate will be adjusted such that the effective rebate remains the same.

The master list of adjustments can be found here. We’ll explore a few in detail below.

LinkPoints offers transfers to two frequent flyer programs: Asia Miles and Air Asia BIG Rewards. We’ll ignore the latter because it’s more of a rebates program, and look at the impact on Asia Miles instead.

If you’re planning to transfer LinkPoints to Asia Miles, you should do so before 1 August.  The transfer rate remains the same, but remember, your LinkPoints balance will be adjusted downwards to maintain its dollar value. In other words, you lose out by not redeeming your LinkPoints now, simply because you’ll have fewer of them come 1 August.

Assuming you exclusively convert LinkPoints to Asia Miles, your current earn rate is 0.5 mpd, on top of whatever you get from your credit card. From 1 August, that becomes a miserly 0.125 mpd, unless you spend at least S$400 per month.

If you’re planning to transfer Asia Miles to LinkPoints, the conversion rate from 1 August will be adjusted to 800 Asia Miles = 400 LinkPoints. It’s still the same (poor) value of 0.5 cents per mile, given the change in LinkPoint value.

Remember that Asia Miles now adopts an activity-based expiry policy, where miles earned from 1 January 2020 will never expire so long as you earn or redeem at least one mile every 18 months (miles accrued before this date follow the old 3-year expiry regime). 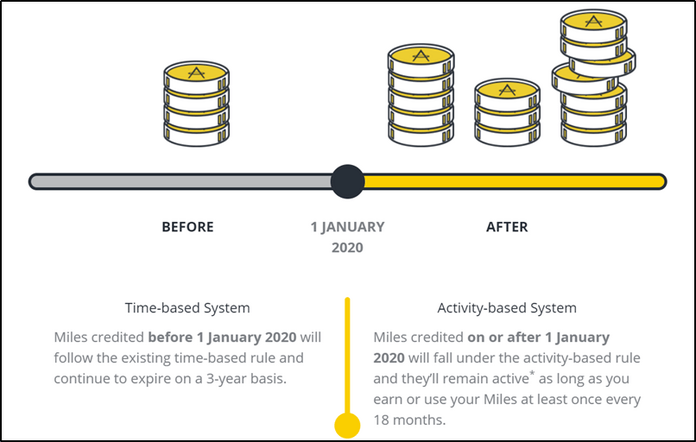 If you don’t fancy transferring miles from your credit card (and paying a fee), then converting a small number of LinkPoints would help extend the validity of your balance.

There are two conversion rates from LinkPoints to PARK$; the larger-sized transfer block represents slightly better value. Unlike the other partners, Plus! Rewards will be making an adjustment ahead of 1 August. From 30 June, the rates will be adjusted as follows.

I don’t know why they’re jumping the gun with the changes, but it seems like the Plus! Rewards member benefits. He/she has one whole month to convert LinkPoints to PARK$ at the enhanced rate, before his/her LinkPoints stash gets adjusted on 1 August. I’m not complaining.

Conversions in the other direction will be also be adjusted from 30 June as follows:

If you felt inclined to make a conversion in this direction, you definitely don’t want to wait because the rate will be subject to two devaluations- one on 30 June, and another on 1 August.

Interestingly enough, GrabRewards is not mentioned in the master list of partner program adjustments, and unless that’s some oversight, the conversion rate will remain at 2,900 GrabRewards points= 500 LinkPoints.

1 GrabRewards point is worth 0.2 cents when redeemed for vouchers, so the current rate is equivalent to trading S$5.80 of value for S$3.33. Assuming this rate stays the same from 1 August 2021, the deal improves somewhat to S$5.80 for S$5.

I’m a bit suspicious though, given how every other partner’s exchange rate has been adjusted such that no transfer is more lucrative post devaluation.

The Plus! Rewards program will become less generous from 1 August 2021, unless you conscientiously spend at least S$400 each month on groceries with NTUC.

Even so, your existing LinkPoints stash will be less valuable for Asia Miles conversions, so if that’s your main use of LinkPoints, I’d advise you cash out now.

When I saw the Plus! email headline, I thought it was awesome since the $20 min spend has always been annoying. Didn’t read the details until your blog post. I don’t spend $400 at NTUC per month, nor am I anywhere close. Looks like I’ll simply be spending at the Dairy Farm group of grocery stores now. Was hoping you did a comparison between the programmes, Aaron.

it’s one of the many things on the to do list! but now that Tapformore’s partnership with krisflyer is no more, the airline angle isn’t really there

The night I red their email, I was really upset.

Whats the impact to OCBC Plus visa card? There’s supposed to be the bonus points credited to your card 30 days after current month.
Can you compare this card with say 365 card which earns 3% on grocery shopping Aaron?