New GrabPay Power Up Challenge: Up to 20,000 bonus GrabRewards points

Register for the latest GrabPay Power Up Challenge and earn bonus points for topping-up and spending via your GrabPay wallet.

Grab has launched its latest set of GrabPay Power Up Challenges, which award users with bonus GrabRewards points for completing a certain set of tasks.

The latest challenge runs from 15 June to 14 July 2021, or until all rewards are redeemed (which usually happens first). You must opt-in for these challenges, which can be found on the home page of the Grab app- just scroll down until you see the Power Up box. 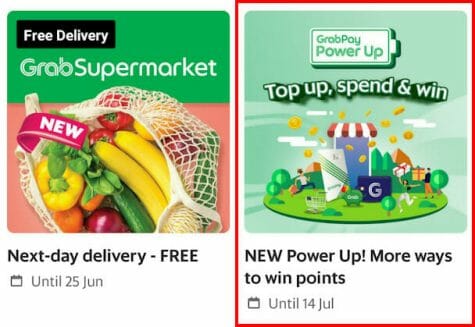 This month’s GrabPay Power Up challenge involves topping-up the GrabPay wallet and making a certain number (and volume) of transactions.

Offers are targeted, and you’ll be able to see yours at the point of registration. Here’s the four different permutations I’m aware of:

Given a value of 0.2 cents per GrabRewards point, your effective rebate (including the base points) for completing the challenge looks like this:

Offer 1 & 2 are definitely the most attractive of them all, although one needs to remember the rebate is capped at S$250 of spend. Offer 4 is probably not worth your time, given how much spend you’d have to divert away from 4 mpd cards.

I was targeted with Offer 3, which I’m on the fence about. Meeting the minimum top-up isn’t the problem, since I need a GrabPay balance to settle my AXS bills. However, meeting the spend requirement will be tricky, because AXS payments do not count towards Power Up campaigns. I’ve registered just in case, but we’ll see.

What’s nice about the Grab interface is that it shows (in real time) exactly how many rewards are left, so you don’t go spending to attain something that’s already not available (ahem UOB ahem).

The T&Cs of the GrabPay Power Up challenge can be found below:

What card should I use for GrabPay top-ups?

While the vast majority of credit cards no longer offer rewards for GrabPay top-ups, there are three exceptions I’m aware of:

Using any other credit card to top-up your GrabPay balance is pointless (literally).

Grab had originally intended to add a S$1 admin fee to all top-ups of less than S$400 made with a Visa credit card, but is temporarily suspending this until further notice.

What should I use my GrabPay balance on?

In an ideal world, you’ll minimize the opportunity cost of using GrabPay by spending on transactions that do not earn points with credit cards.

However, GrabPay has its own set of rewards exclusions, many of which overlap with those of banks. For example, charitable donations, education, and insurance transactions will not be eligible for GrabRewards points.

This leaves a very narrow range of transactions where using GrabPay entails no opportunity cost. MCC 9399 Government Services is one of them, so you could pay off your road tax or some other bill on a government portal that accepts the GrabPay Mastercard. MCC 4900 Utilities would be another, but keep in mind there are still some credit cards (e.g SCB and UOB) which reward this category.

Once again, AXS transactions do not earn any GrabPay points, nor will they count towards the Power Up tracker.

If you were targeted with Offer 1 & 2, I wouldn’t worry too much about opportunity cost. The effective rebate is high enough, and you’re only spending S$250 anyway.

It’s Offer 3 and 4 that become a bit more tricky, and while I’ll certainly keep the Power Up promo at the back of my mind, I wouldn’t go out of my way to meet it.

Any other GrabPay Power Up offers you received?

Thanks! Will get it added

Targeted for the $800 top up offer.
Swept the last $300 top up, but this round like you pointed out, wont go purposely to meet the $750 spending amount.

Those who are doing this…. might be worthwhile to get the rewards multiplier for 10 bucks too?