From 1 August to 30 September, earn up to 1.2 mpd for GrabPay, Singtel Dash, Lazada Wallet and ShopeePay top-ups.

For the months of August and September, OCBC VOYAGE and Premier Visa Infinite cardholders can earn VOYAGE miles and OCBC$ for topping up e-wallets like GrabPay and Singtel Dash.

This is a rare opportunity indeed, as topping up e-wallets is explicitly excluded from rewards by virtually every bank out there (including OCBC, under normal circumstances).

Earn rewards for topping up e-wallets

From 1 August to 30 September 2021, OCBC VOYAGE and Premier Visa Infinite cardholders will earn VOYAGE Miles and OCBC$ respectively when they top up at least S$1,000 per month to any of the following e-wallets:

No registration is required, and cardholders will automatically earn rewards as follows:

Rewards will be credited to your account within 2 months from the end of the promotion period, i.e. by 30 November 2021.

T&Cs can be found here for the OCBC VOYAGE and OCBC Premier Visa Infinite.

What alternatives exist for GrabPay top-ups?

I’m aware this promotion covers more than just GrabPay, but it’ll invariably get the most attention as it’s the most flexible of the four e-wallets.

Even if you don’t qualify for an AMEX SIA Business Card (only available to SME business owners), you could still earn up to 1.7% cashback on your top-ups. In my opinion, that’s much better than the 0.5 mpd on the VOYAGE (unless you value miles at a whopping 3.4 cents each).

The math is more favorable with the OCBC Premier Visa Infinite, as I’d definitely take 1.2 mpd over 1.7% cashback.

Rewards aside, VOYAGE cardholders could use this promotion to clock spending towards the S$60,000 required each year for an annual fee waiver (S$30,000 for Premier customers). Do note that this promotion will not count towards the minimum spend required for limo rides, however.

What should I use my GrabPay balance for?

Once you’ve topped up your GrabPay balance, be careful how you use it! Don’t waste it on GrabFood or Grab rides, or spend it at merchants where you could already earn 4 mpd with other credit cards (the same logic applies for any other e-wallet, really).

Instead, conserve it for situations where earning rewards with regular credit cards is impossible. I’m thinking of insurance premiums, government transactions, IRAS income tax, town council bills, condo fees and the like.

AXS machines recently started accepting GrabPay once more, which is a great opportunity to earn rewards on bill payments. To make an AXS payment with GrabPay, select the billing organization and enter your details as per normal. On the payment selection screen, select “debit card”, then “other banks” (if this fails, select “credit card” then “other banks” and try again).

Enter your GrabPay Mastercard details, then the OTP. 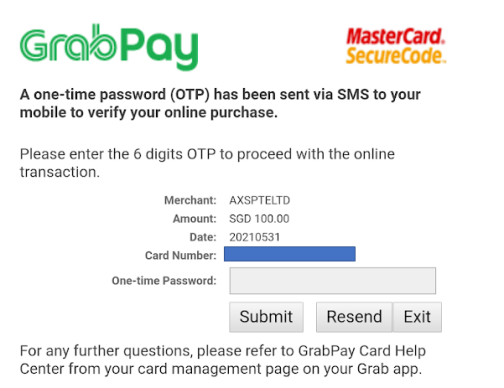 That’s it. You’ll see the transaction reflect in the “recent transactions” section of the Payment tab in the Grab app. 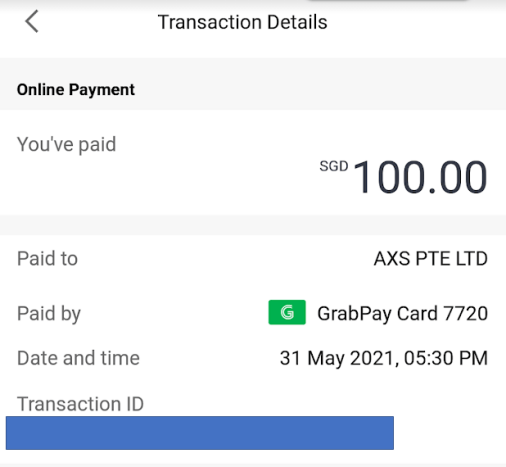 A few points to note:

This promotion is arguably more useful for Premier Visa Infinite cardholders than VOYAGE members, but in any case it’s a seldom-seen opportunity to earn rewards for e-wallet top ups (and clock spending towards the annual fee waiver).

Don’t jump the gun just yet as the campaign only starts on 1 August.

The challenge is not enough GPMC limit. Only 30k per year which is quickly digested when paying income via AXS (get 1.7% from UOB Amex Absolute). Any hack for second GPMC? Children?

not a whole lot you can do, since the $30k is an MAS requirement. i suppose you could get your kids to sign up for one as well, or your grandma.

You have to select credit card on AXS, it will not accept GPMC on debit card mode.

Payphones used to be able to take coins

If only it is perm..