From 23 November 2021, Singapore Airlines will begin operating its newly-refitted B737-8 aircraft to Phuket on a daily basis.

Earlier this week, Singapore Airlines unveiled its new Business and Economy Class products on the Boeing 737-8 (formerly known as the Boeing 737 Max 8).

Regardless of which cabin you’re in, these seats represent a massive upgrade from the plane’s SilkAir days, with flatbed seats in Business Class, and personal IFE screens and Wi-Fi throughout.

One thing SIA were cagey about during the launch was when exactly the B737-8 would go into service, and on what route. The question was raised during the Q&A, to which the response was that they “hoped to have it flying by the end of 2021”.

Well it looks like that hope has been fulfilled. Singapore Airlines has announced that Phuket will be the first route to see the B737-8, starting from 23 November 2021.

Phuket will be the first B737-8 route

A Singapore Airlines spokesperson has provided the following statement regarding B737-8 operations:

What’s funny is that during the B737-8 launch event, an SIA representative (who shall remain unnamed) nudged me and pointed at the IFE display, saying “isn’t that interesting!”

I’m quite oblivious and assumed I was just being hit on (hey, there’s a niche for balding men), but looking back at my photos I’m starting to understand what was implied…

SIA’s website now displays the B737-8 (interestingly referred to as the B737-8 MAX; a term you’d think airlines would try and avoid as much as possible) as the operating aircraft for the morning SQ728 and evening SQ738 flight from 23 November 2021 onwards. 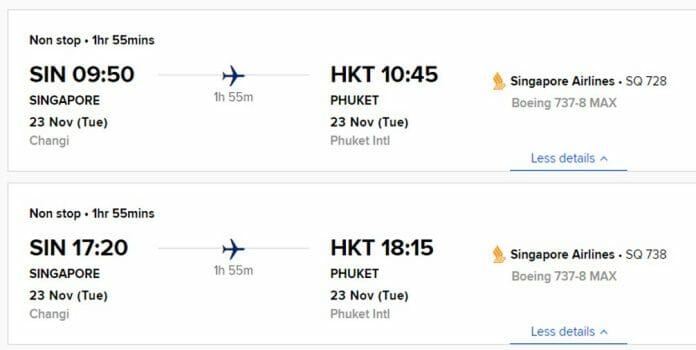 Both flights operate daily, but do note that the B737-8s appearance on this route is inconsistent.

So if you’re hoping to try these new cabin products, be very careful to double-check the aircraft type by clicking “More details” in the booking interface. 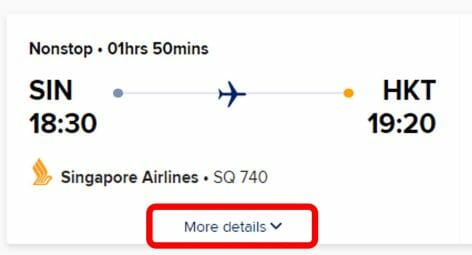 The last thing you want is to end up on one of the old B737-800 NG planes (NG ironically standing for “next generation”), which have recliner-style seats and no personal seatback TVs!

Incidentally, 23 November is shaping up to be a busy day for Singapore Airlines, as it’s also soft launching the newly-renovated SilverKris Lounge at Changi Airport Terminal 3. This isn’t the official opening, but will give us a good idea of what we can expect when the finished product is revealed in Q1 2022.

The new SilverKris Lounge opens from 5 a.m onwards, so passengers on SQ728 are in for a double treat- first to review the new lounge, as well as the new seats!

Seat width ranges from 19-21 inches, and all seats convert into a full flat 76 inch bed.

For the full story on SIA’s new Business Class seats, including photos and my thoughts on which seat to take, refer to the link below.

While it’s a more basic affair here, these seats will still be a massive upgrade from SilkAir days. Every passenger now has an adjustable headrest, a personal IFE monitor, and access to Wi-Fi and mobile connectivity.

For the full story on SIA’s new Economy Class seats, including photos and my thoughts on which seat to take, refer to the link below.

Singapore Airlines has six B737-8 aircraft in its fleet, all of which have been refitted with the new cabin products. A further eight will be delivered this financial year (i.e. by 31 March 2022), although these will need cabin refit work and repainting before entering into service.

All in all, we’ll certainly be seeing more B737-8s introduced on other regional routes very soon. It’s just a shame that two-way quarantine-free travel to Phuket isn’t available to Singaporeans yet, or I’d be all over the inaugural flight.

If you happen to be on one of these, do let us know what you think about the product in action!

Nice to hear they using the new planes to Phuket . Is Phuket under VTL yet ?

Nope.
No VTL for Thailand yet but really hope so soon

Coffin plane no thanks

Suggest that you reconsider your choice of words. 🤔

Goldfish memory? This plane got grounded for so long because it kept crashing. Now they are pulling it out again because past few years no crash. But past few years have zero flights because of covid. 🙂

Forgeg the hype- the new coffin business class is a downgrade.

These are short – often day – flights where a lie flat with narrow seats is unnecessary. The OLD seats were much more spacious and comfortable for the types of routes these planes are flying on.

I applaud SIA for being honest here, some might still feel uncomfortable with the Max plane whether it has the name or not and they can at least differentiate it easily when booking.