SIA has overhauled its mySQupgrade programme, replacing bidding with instant cash upgrades- including to First and Suites!

Singapore Airlines launched its mySQupgrade programme back in July 2016, which allowed customers to make cash bids for upgrades from Economy to Premium Economy.

This was eventually expanded to cover upgrades to Business Class, and allow KrisFlyer members to bid with miles (albeit at a miserable valuation; paying for an upgrade with miles is not the same as upgrading with miles). 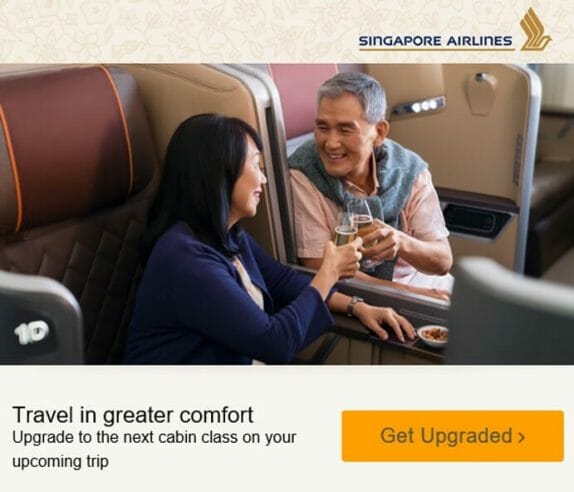 Singapore Airlines has now made some significant changes to mySQupgrade, replacing bidding with fixed cost upgrades for a limited time. What’s more, even the hallowed First/Suites cabin is now fair game!

Under the old system, Singapore Airlines passengers were able to submit upgrade bids up to 50 hours before departure. A minimum bid applied, and either cash or KrisFlyer miles (but not a mixture of both) could be used for bidding.

A five-colour meter would let you know the “strength” of your bid, though it was important to take this with a liberal pinch of salt, as the system was obviously designed to nudge you towards higher bids.

Successful bids would be confirmed at least 36 hours before departure.

With the new system, there’s no more bidding. Within 72 hours of departure, passengers will be offered a take-it-or-leave-it price, and all upgrades are confirmed immediately upon payment. 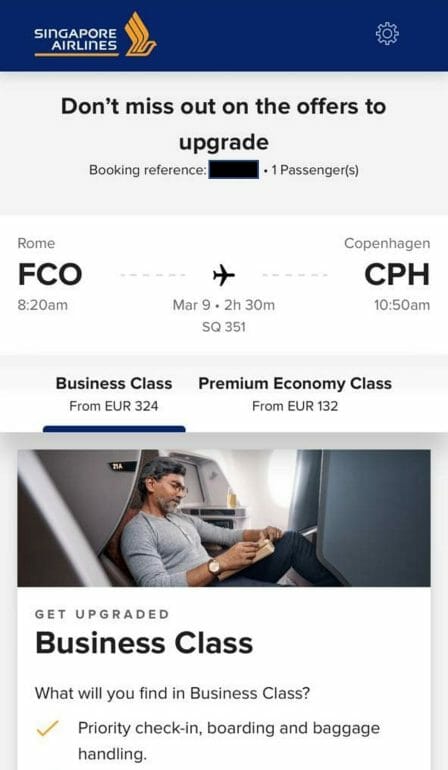 All upgrade can only be paid for with cash; paying with KrisFlyer miles is no longer available (not that you should in the first place!). Moreover, redemption bookings are now eligible for upgrades too, and upgrades to Suites/First Class are also possible.

I received an invitation to upgrade my upcoming Business Class award flight to Los Angeles, though I’d be hard pressed to pay the S$4,560 asking price… 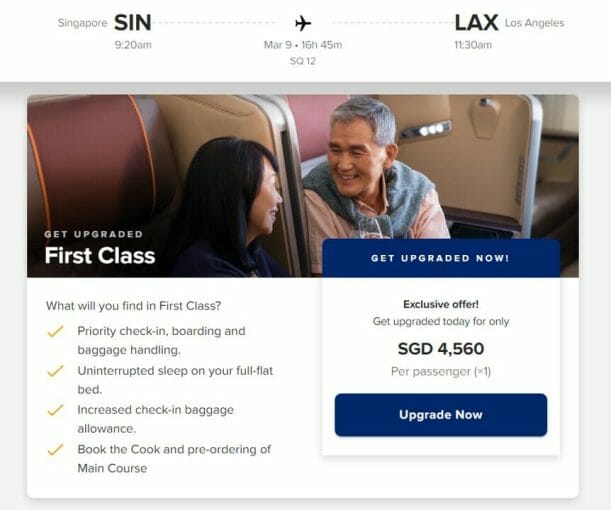 Do note that upgrades will not be available in the following scenarios:

Upgraded bookings enjoy all the entitlements of the higher cabin, including lounge access (where applicable), extra baggage, priority check-in and priority boarding. However, you will earn miles and status credits as per your original booking.

If you previously made payment for advanced seat selection or additional baggage, you will need to contact Singapore Airlines for a refund upon successfully upgrading.

Upgrades are strictly non-refundable, although your ticket will retain its original conditions (and Singapore Airlines is waiving all change fees till at least 31 March 2022). In other words, should you later choose not to fly, you’ll forfeit the upgrade fee, but may be eligible for a refund of the underlying ticket depending on the fare conditions.

Do also keep in mind there is no guarantee you’ll be seated together with your travelling companion. Once upgraded, you’ll need to select seats in the new cabin from the Manage My Booking function.

What are the implications?

The key question I have (and I can’t answer without more data points) is how much upgrades will cost under the fixed-price system.

While there have previously been reports of successful upgrades made at minimum bid, you can bet that the fixed price offered will be higher than what previous minimum bids were- but just how much is anyone’s guess.

I really can’t tell you whether it’s “worth it” to upgrade, because that boils down to an individual’s means and preferences. For me personally, I’d be more inclined to upgrade if it were a red-eye flight, an ultra long haul flight, or a special occasion.

The second thing to note is that the new system makes upgrades time-sensitive affairs. While the previous system only assessed bids within 50 hours before departure, the new system is first-come-first-serve. If you see the upgrade email late, it’s entirely possible all seats will be gone by the time you try to buy one.

I do also wonder whether this will have any discernible impact on the number of seats made available for awards. For my SIN-LAX flight, even though one First Class seat was available for purchase/upgrade, I wasn’t able to book that seat with miles. We’ll have to see, although it’s also a function of how many people are willing to pay the asking price.

Singapore Airlines has replaced its bid-to-upgrade system with a fixed-price model, in what it describes as a “limited time only” arrangement. I assume they’re running a trial and want to see whether this model proves to be a better revenue generator than the previous one.

Long-time SIA veterans will know how zealously the airline guards its premium cabins, so it may come as something of a shock to know that First Class/Suites upgrades are now on the table- although still steep, if my one data point is anything to go by.

I’ve reached out to Singapore Airlines for further comment on this, and will update the article if/when I get a response.

Upgrade offer from Economy to Business. 400 SGD for a 2h flight (Cambodia).

company pays your economy class ticket, you pay a little for comfort.. tho i guess you need at least a 12 hour flight to make it worth..

$430 one-way to BKK – from Economy Lite to Business. If I include the cost of the economy ticket, that’s higher than buying a one-way Business from the get go.

These are almost guaranteed to be poor value. Every single airline I’ve seen this on sells fixed price upgrades at unappealing prices. Combine that with SQ’s protection of its premium cabins and there’s not much chance for outsized value.

I bid a business class upgrade from Seoul to Singapore for $599, and got it. Day time flight so the time passed effortlessly.

Then on my recent trip Singapore-Brisbane, which is roughly the same time span, they were offering $1,600+… I like the old way more. 😀

It was great. I had 6 glasses of champagne 😀

Sounds more expensive than if you had bought bus to begin with.

I’ve tried this numerous times with other airlines (and cruises) and found that you need to bid close to the actual business class fare to get the upgrade and then, of course, you’ve only actually upgraded one of the two legs. I’ve found this very bad value. Might as alway pay the J fare and get both legs and the points.

fully agree, on Swiss I never once even considered it. Near to same pricing as fare difference and no miles.

I paid for an upgrade yesterday, Seoul to Singapore, SGD864 for economy saver to business, 6 hour-ish flight

paid as the flight was absolutely full, health+safety reasons. i found the pricing quite steep

sucks that you only get the original miles for the flight..

I bid minimum of SGD300 each way and was accepted by SQ.

do I understand correctly that if one would accept the 4’560 SGD upgrade offer listed in the article that said passenger would not only NOT get any miles (possibly also no PPS value) and also NOT be refunded if there is a change (which is quite the likelihood for C and above bookings in these times?).

ps. I have a question re: upgrades. I book my own tickets, the company pays C but on occasion I’d like to fly F. Booking F and asking only for the C part is not a possibility and if I book C and then upgrade to F I need to pay the SQ booking fee on top. Is there any other method you would suggest? Thanks

I book through our corporate travel agent. They issue the invoice for C class fare which is reimbursed by the company. I make separate payment for the top up to F class. There is no extra booking fee.

in my case, since I redeemed my J ticket, yeah, I wouldn’t get any miles or PPS value. if the airline makes the change, however, i’m sure they’ll do a refund.

Received an email inviting to “upgrade” for my SIN-SFO only to then be told “your booking is not eligible”. Getting picky, huh?

haha that’s a tease if i ever saw one. maybe they ran out of seats?

Same thing happened to me and within 30 mins of getting the email? Confused

The new system doesn’t make any sense at all. I purchased an Economy Saver ticket for $424 and the Business Saver for the same route is $1134, meaning to upgrade by paying the fare difference would be $1134-424=$710. However, mysqupgrade is setting the price at $840 for the “instant upgrade” feature. LOL okay sure.

Hey, it makes sense for the airline… 🙂

I think Siyuan above is the same. Not sure how they think charging more will appeal.

My upcoming SIA VTL flight from KL to SG eligible for upgrade from economy to business for RM535.

Flight back to KL was offered to business class for RM683

March 2022 offered econ-bus upgrade sun-Syd. $1800. Was an overnight flight with a long layover. Still deciding. The lounge access for 8hrs may be worth it.

Offered $430 from Econ to Business. But my friend on the same flight got offered $250 for her upgrade. (Bangkok). wonder why…

Received upgrade invite to LAX-SG leg from Premium Economy, USD1244 for May flight.

Not sure whether if I should upgrade but I think I’ll consider and it’s more worth it to get an upgrade in my return trip, longer duration and all. Just wondering if I’ll be offered an upgrade for my return trip to Singapore.

Did u get to find out if it included return?

Did anyone fly from Copenhagen to Singapore and was offered an upgrade? If so, how much did it cost?

Received an upgrade offer from Premium Economy to Business Class for JFK to Frankfurt for $260 USD. Insanely good deal.

Yes that was indeed a great deal. Hope I get something similar from CPH to SIN.

Upgrade offer from SIN to ICN. Economy to Biz at $1040