More SIA passengers on regional flights can now enjoy live sports and news, with the expansion of Live TV service.

In July 2021, Singapore Airlines began a trial of inflight Live TV service on its A350-900 ULR aircraft, bringing news and sports to passengers in real-time.

Live TV was eventually expanded to the long-haul configured A350-900s, and Singapore Airlines has now confirmed that passengers flying on the B737-8 (formerly known as the MAX, and not to be confused with the B737-800) and B787-10 can enjoy the service too.

With the latest updates, a total of 63 SIA aircraft now offer Live TV service, or just under half the fleet.

In case you’re wondering which version of the A350-900 you’re flying on, here’s a reminder of how the seats are configured:

There are several ways to tell if your A350-900 has Live TV service:

For those of you who like to track aircraft on sites like FlightRadar24 or FlightAware, here’s the relevant registration numbers for the A350-900 ULR and Long-Haul aircraft. 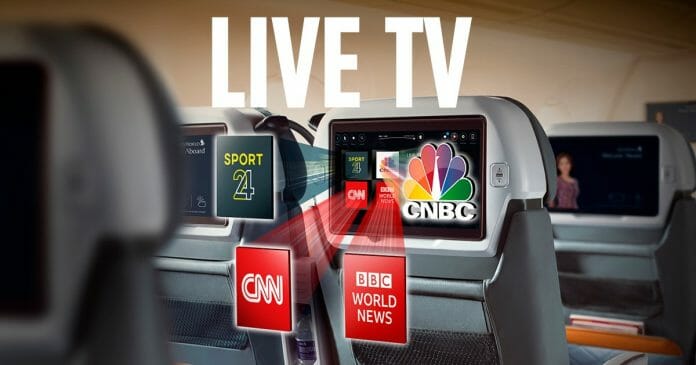 Passengers flying on SIA aircraft with Live TV service can choose from the following four channels:

What’s really catching my attention is Sport 24, which holds the broadcast rights for major sporting events like the US Open and Wimbledon tennis championships, the English Premier League and UEFA Champions League, NBA, PGA Golf Tour and the Olympics. Imagine witnessing these events live from your seat.

I’ve previously managed to catch the Australian Open on a flight from Bangkok, and more recently, the semi-finals of Indian Wells when flying from San Francisco.

The feed remained stable throughout the broadcast, and it was just like watching from anywhere else on earth.

Will Live TV come to other aircraft?

Singapore Airlines remains tight-lipped about a broader rollout, only sharing the following

We will share plans for a broader rollout, if any, at the appropriate time.

While I’m confident we haven’t seen the end of the Live TV rollout, it’s a safe bet the B737-800s won’t get it (on account of not having IFE screens!).

Singapore Airlines uses a mixture of Panasonic and Thales IFE equipment, and while Panasonic Avionics owns the international inflight rights to the Sport 24 channel, it’s mentioned its openness to working with other providers:

Green tells Runway Girl Network that Panasonic is talking to all the usual players in IFC (inflight connectivity), effectively anyone who wants live sports as part of their offering, which is a “huge and growing market”.

Panasonic expects to forge relationships with aero ISPs after ensuring they have the right tech and security to protect the sports streams. But the company is not opposed to working with rivals in the embedded IFE space, with Green noting of course that Panasonic has a number of airline customers with a mix of IFE and IFC providers.

Once agreements are reached and Panasonic hands over the streams to the IFC providers, in theory those streams are available for whatever IFE hardware is on board, says Green.

Indeed, Panasonic recently secured one such agreement bringing Sport 24 to JetBlue’s A321LR aircraft, which are fitted with Thales AVANT monitors and Viasat’s inflight connectivity network. So there’s no reason why that couldn’t happen for Singapore Airlines, and in any case, the vast majority of SIA’s fleet uses Panasonic Avionics hardware anyway.

It’s certainly not the first airline to offer such a service – others have had it for years now – but a welcome addition to the KrisWorld entertainment repertoire nonetheless.

I just wish they’d enable the external cameras so you could watch those!