oneworld Emeralds (and First Class passengers) rejoice: Qantas will reopen its excellent First Lounge by this time next month.

If there’s an example of a lounge whose star burned too bright for too short a time, it’s the Qantas First Lounge at Changi Airport Terminal 1.

Opened in November 2019, it barely saw four months of service before COVID-19 brought down the shutters. During its short run, however, it quickly became the favourite of First Class passengers and oneworld Emerald members. I reckon it was hands down the best lounge at Changi, bettering even Singapore Airlines’ flagship Private Room.

But now there’s some good news: as per Executive Traveller, Qantas will reopen the First Lounge at Changi Airport from 18 June, just in time for the return of the A380 to the Sydney-Singapore-London Kangaroo Route from 19 June.

The lounge will operate from 2.30 p.m to midnight daily.

Qantas reopened its Business Lounge at Changi Airport back in December 2021, which has  been playing host to all eligible passengers ever since. All things considered, it’s a very decent facility, though obviously not in the same league as a dedicated First Class lounge.

From 18 June, regular service resumes as the First Lounge reopens its doors. This 1,000 sqm lounge with its shower suites, cocktail bar, and stellar dine-on-demand offerings will provide a much-needed premium touch to oneworld flyers departing from Changi.

I visited the 240-seat lounge back in December during a media event, and walked away very much impressed. The aesthetics are eye-catching, with a build conceived by David Caon (who oversaw the design of Qantas’ B787-9 Dreamliner cabins), in collaboration with Kelvin Ho of design firm Akin Atelier. Interior design features materials like Carrara marble and oak, with a soothing colour palette and separate areas for working, dining and relaxing.

The F&B is overseen by Neil Perry of Rockpool Grill fame, who has been consulting for Qantas since 1997. Prior to closure, the menu offered the following: 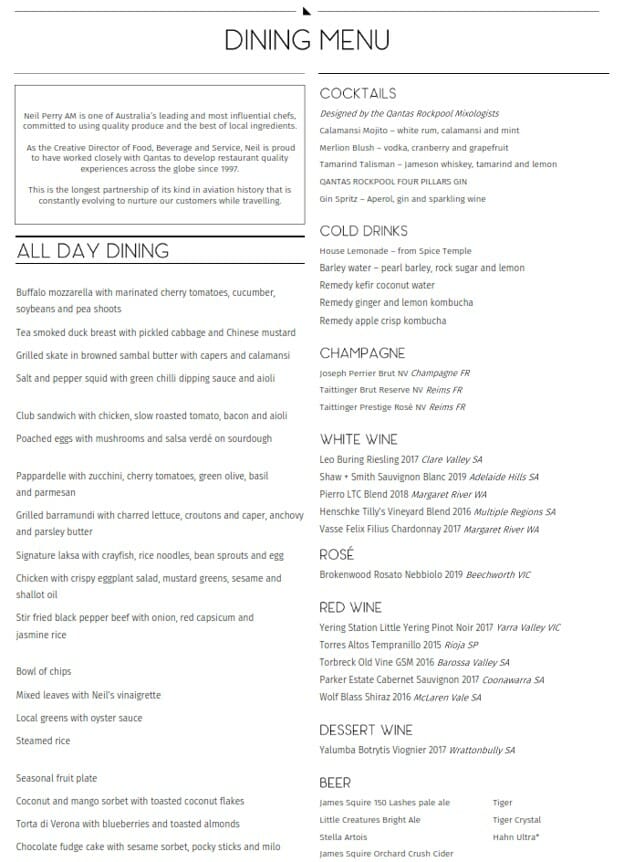 The food here isn’t just “good for airport” good. It’s good, period. My personal favourite was the grilled skate with browned sambal butter (that’s sambal stingray to the rest of us), a delicious creation that I would gladly have paid money for outside.

It’s possible we may see a scaled-back menu initially, as the lounge takes time to find its feet. But when things are back up and running, we’re going to have an intriguing battle on our hands for culinary dominance: this, or Singapore Airlines’ soon-to-open Private Room?

Access to the Qantas First Lounge is available to:

It’s the last one that lounge dragons, unfortunately, are least familiar with. What it means is that you could access the Qantas First Lounge when flying into Singapore on a oneworld First Class flight and connecting to a oneworld Business or Economy class flight (e.g. flying LHR-SIN on BA First Class, then SIN-KUL on MH Economy Class).

The Qantas First Lounge will reopen from 18 June, which marks another milestone in the return to normality, and further bolsters Terminal 1’s credentials as possibly the best terminal in the world for oneworld members (remember: there’s also the Qatar Premium Lounge and British Airways Lounge)

If you didn’t have a chance to visit the Qantas First Lounge prior to COVID, there’s no time like the present. It’s just a shame that access for non-status flyers will be rather difficult, what with Qantas First Class awards out of Singapore being so hard to redeem. Redemption opportunities are slightly better on Emirates First Class, though the mileage requirements will be steep.

Anyone planning to visit the Qantas First Lounge soon?

I’d still prefer LHR T3 over Changi T1 as an Oneworld Emerald, especially when flying in Economy given QR doesn’t allow economy status pax in their lounge here. LHR T3 offers an Emerald in economy (at least before covid): – CX First lounge: best for a la carte dining and champagne selection – BA First lounge: best for their liquor selection (including Blue label) – AA First lounge: nothing special, but they have Moet champagne so can do champagne testing between the different lounges – QF Business lounge: Best cocktail bar, nice G&T selection, and healthy food If bored after… Read more »

haven’t had the pleasure of visiting the UK in a long while, although I now have oneworld sapphire status…