Check your Citi app and see if you're targeted to earn up to 8 mpd on FCY spend, from now till 27 August. Min. spend and caps apply.

If you’ve got a Citi Rewards Card or Citi PremierMiles Card, you’ll want to fire up the Citi app and see if you’ve been targeted for an excellent offer:

Registration is required, and both promotions run till 27 August 2022.

Citi Rewards Card: Up to 8 mpd on foreign currency

From 27 June to 27 August 2022, targeted Citi Rewards cardholders will earn up to 8 mpd on foreign currency (FCY) transactions.

The 8 mpd rate is broken down as follows:

The 8 mpd includes the usual 4 mpd that Citi Rewards cardholders earn on all online transactions (except travel-related spend like hotels, car rental and airfares), as well as offline transactions at department stores and stores that sell bags, shoes and clothes. This is subject to the usual S$1,000 cap per statement month, with no minimum spend required.

Notice how the dinner at Disneyland and hotel payment do not qualify for the 9X bonus points (because they’re offline and travel-related expenditures respectively), so the effective earn rate on those transactions is 4.4 mpd (1 point= 0.4 miles).

Citi PremierMiles Card: Up to 4 mpd on foreign currency

From 27 June to 27 August 2022, targeted Citi PremierMiles cardholders will earn up to 4 mpd on foreign currency (FCY) transactions.

The 4 mpd rate is broken down as follows:

Registering for the offer

This offer is targeted, and requires registration. To see if you’re eligible, login to the Citi app and tap on “Get More” at the bottom. Scroll down and you’ll see the following banner. 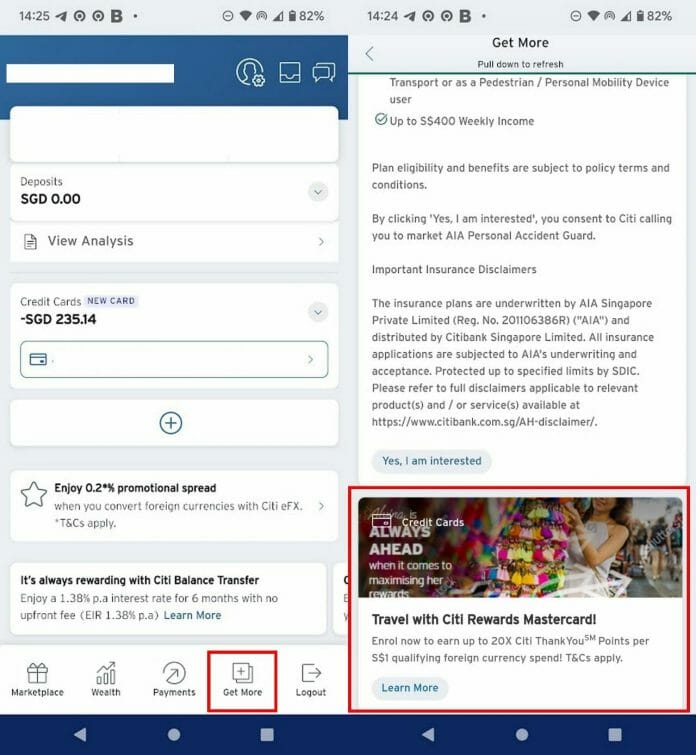 Tap on the banner and complete your registration. You’ll receive an SMS confirming your participation.

The T&C for the FCY spend promotion can be found below:

Do note that the standard rewards exclusions are featured, so there’ll be no points awarded for transactions like education, government institutions, insurance, charitable donations and prepaid top-ups, regardless of what currency they’re charged in.

When will the bonus points be credited?

The bonus 10X points (4 mpd) for the Citi Rewards Card or 2 Citi Miles (2 mpd) for the Citi PremierMiles Card will be credited to your account within 3 months from the end of the promotion period, i.e. by 27 November 2022.

Is the offer worth it?

If you have a Citi Rewards Mastercard, chances are you’re pairing it with the Amaze Card already to earn 4 mpd on overseas spend, with no FCY fees involved. Therefore, the question is whether it’s worth paying a 3.25% FCY fee for the opportunity to earn an incremental 4 mpd. That values a mile at around 0.81 cents each, so I’d lean towards yes.

However, this assumes the transaction in question is online, or offline for department stores, bags, shoes and clothes. If you’re swiping your Citi Rewards at an overseas restaurant, for example, you’re only earning 4.4 mpd. In this case, you’re paying a 3.25% fee to earn an incremental 0.4 mpd, and totally not worth it.

If you have a Citi PremierMiles Mastercard and are pairing it with the Amaze Card for 1.2 mpd on overseas spend and no FCY fees, you’re paying a 3.25% FCY fee for the opportunity to earn an incremental 2.8 mpd. That works out to 1.16 cents per mile- still acceptable, but why not just get a Citi Rewards Card?

It’s a shame this came after the June holidays, but still an opportunity to make hay if you’ve got a work trip or plan to buy something online in foreign currency. Be sure to open your Citi app and check if you’re targeted.

but citi rewards do not earn points for travel transactions though

check your MCCs. hotel points are not travel trxns.

I’m not sure if my understanding is correct here but with the $1,000 Citi Rewards cap, and given that we’re already into July, wouldn’t you exceed the cap if you had to hit $2,500 minimum spend? So the last $500 wouldn’t earn you the usual 4mpd?

The cap is by statement month, so depending on your luck you might be able to squeeze in 3 periods of $1k each

It’s also useful if you (i) already hit your CRMC cap for the spending cycle, (ii) you have a transaction between $1k & $5k that cannot be split up, or (iii) paying for a travel-related expense. In all these cases, you are essentially paying 3.25% to earn 3 miles (since the alternative is Amaze + PRVI for 1.4mpd). That’s about 1.08cpm which isn’t too shabby.

not quite. it will also get 8 mpd for offline bags, shoes, clothes and department store spend. so someone going for a factory outlet shopping spree for instance would find it useful

Citi excludes hotel and airline online spend??! Since when??

Ah. I see you mean the bonus points for online spend for the Rewards card only. So this FCY promotion being a separate campaign, I am assuming online airline and hotel spend still qualifies for the 4mpd (min $2.5k, max $5k), whether it’s Rewards or PremierMiles card?

I still hold the visa versions of both cards and got nothing. Time to upgrade to MC or just bad luck?

I got the targeted offer for the CRV. but not the CRMC.

Same, I got the offer only for CRV.

you’d basically be earning 4.4 mpd on that amount.

Don’t have the CRM option, was given promo on CRV instead…

I have both CRMC and CPM but i only see one option of the promo for the CPM not CRMC. Anyone facing the same situation?

Same, only one option available for my CPMV not for CRV

It’s the opposite for me, which is annoying, as I was actually hoping to get the offer for the Premiermiles Visa card. Instead I appear to only be able to register for the Rewards Visa card.

Just applied for the card on the app. Unrelated question: Citi is offering “eligible cardmembers” (new to bank) 30,000 TY points as a welcome gift upon min spend. If I already have the Citi Prestige, can I qualify?

I remember there was one bank that made an exception where premium card holders were still considered new to bank–either HSBC or Citi, but can’t remember.

Think we should stop saying that Amaze has no foreign currency fee. The spread has been widening over time. It’s now about 0.0035 average spread on top of MC rate, so about 11% of Citibank spread of 3.25%

Ditto. Did a GBP denominated transaction (British Airways) last week. Spread was 0.6% lol. Better than 3.25% for sure, but the end is near.

Spreads are not the same as fcy fees though. When you pay via a regular credit card you have spreads+fcy fees. I don’t know what the spread is for mastercard/visa credit cards, but to the extent it’s the same as amaze (is it?) then you’re still saving a fair bit

Nomenclature that refers to the same thing. The spread is earned by Amaze as a “fee”.

Citibank’s fee will have mastercard/visa spread as well, so it will be higher than 3.25%. That’s why you shouldn’t confuse spread and fcy fee. Amaze has spread. Citi has spread + fcy fee

No. Amaze has MC spread + Amaze spread. They add extra to the MC spread and it seems to be getting more and more as time goes by. Originally their rate was the same as MC rate, now it is worse. I guess they are milking the cow until they kill the goose that lays the golden egg.

I have this on Rewards Visa instead. As it can’t be paired with Amazed, it’s pretty straight forward if you can max out rewards mc and this together.

Anyone knows if MCC for agoda / Expedia etc counts as travel under CR hence gets 0.4 only?

Wonder if payment made overseas via Google Pay linked to citi premier miles will qualify for the 4mpd.

Halo… For FCY spend min2500 max 5000
can it be online shopping in FCY or must be physical paying something at oversea?

Hi, I was targeted with Citi PremierMiles and want to use it for my hotel spend in Korea. The problem is the check-out date is Aug 27th, which is the last day of the promotion period. Does anybody know whether the charge must be posted by Aug 27th, or would it be fine if the transaction is made on Aug 27th and it gets posted 2-3 days later? I assume the promotion period follows SG time?