UOB UNI$ can now be converted to AirAsia Rewards points, but I doubt miles chasers will find much use here. 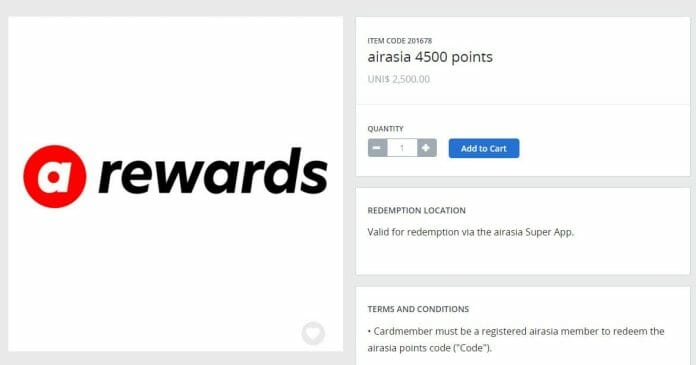 While more choices is always a good thing, this fixed-value rebates programme is unlikely to raise any pulses.

A S$25 admin fee applies per transfer, regardless of the number of points transferred. AirAsia points expire 24 months after the date of issuance.

Cardholders will receive a redemption code via SMS upon successful conversion, which must be redeemed via the AirAsia Super App for points within 30 days. That should already be a hint that AirAsia Rewards is less of a frequent flyer programme, and more like a prepaid balance used to buy things.

AirAsia points can be used to offset the cost of flights and other purchases on the AirAsia Super App at a rate of 125 points= MYR 1. However, during its monthly Super Members Week, the value is temporarily boosted to 50 points = MYR1, which I suppose is when you should be spending points.

In its previous iteration as AirAsia BIG, there was an award chart of sorts where the number of points required for a free flight was based on flight duration. But that was scrapped in favour of a fully-dynamic system when AirAsia Rewards was born.

AirAsia also offers something called “Final Call Flight Deals” which I assume are available for fewer points, but it’s just hard to analyse the burn opportunities because they’re listed on the AirAsia Super App, and I keep getting the message “deals are not available in your region” when I check.

If you redeem points at the enhanced rate of 50 points = MYR 1, you’re taking MYR 90 (S$28) of value instead of S$75 (assuming a value of 1.5 cents per mile), which I suppose is somewhat better, but still there’s very little to get excited about here.

Which bank has the most transfer partners?

While the addition of AirAsia brings UOB’s transfer partner stable to three, it’s still a far cry from the big boys in the market.

UOB cardholders now have three airline transfer partners to convert their UNI$ to, but I just can’t see any scenario in which you’d opt for AirAsia. Even if you need airasia tickets, you’re better off buying them on sale than turning your hard-earned UNI$ into airasia points.

Any sweet spots within the AirAsia rewards programme I’m unaware of?

Goodness. What a total complete waste of time. Any new offerings can surely only improve in 2023?

So very UOB, introduce and offer rewards that has no value whatsoever to customers. I’m just surprised they didn’t offer this to the 1st 10000 who sign up or whatnot.