A failure of the imagination: AMEX Imagine goes bye bye

It took me about 30 minutes to think up the headline for this article. But I think it was totally worth it. 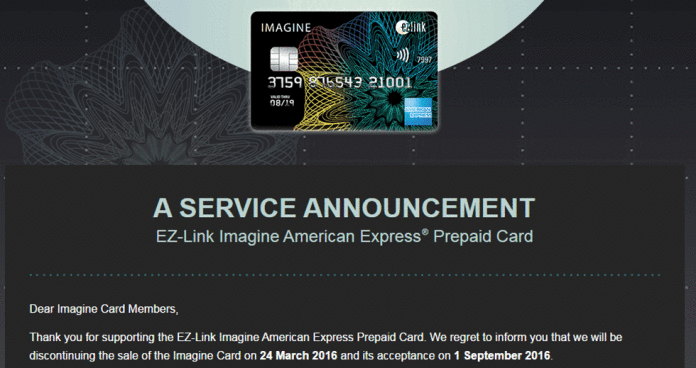 Anyway, it was a sad day for the miles earning game as EZ Link announced it would be discontinuing the EZ Link Imagine AMEX Prepaid card.

A nifty FAQ is provided here which you should read if you have an active Imagine card. Card sales will cease 24 March, top ups can continue till 31 May and the card will no longer be accepted from 1 Sept.

Why was the card discontinued? I can’t imagine that people playing the miles game had anything to do with it- if anything, they probably kept the card alive much longer than it would otherwise have. I know plenty of people who would commit to spending $2,000 each month purely through that card, and in doing so earn 8,000 miles each month from the DBS Woman’s World Mastercard. I suspect that EZ Link simply decided it wasn’t earning enough from its share of transaction and top up admin fees (which I imagine AMEX kept a large share of).

What do I do now?

Well, first you should enjoy your last few cycles of top ups. March, April and May are still good for top ups, and that will net you another 24,000 miles if you use your DBS Woman’s World Card.

I have to admit I was never a big user of the Imagine because in the course of my job I typically make $2K+ of Paypal payments each month which lets me max out the DBS Woman’s Card. But there are people who understand the ins and outs of the card much better than me, and you can read their guru advice here.

After the Imagine, FEVO is your  next best option for maxing out your DBS Woman’s World Card. The card costs $28 and charges a 1% top up fee. Full fees below

This move makes me worried that we might be seeing the end of prepaid cards in Singapore, which were never a big business to begin with. But really, who knows. No point worrying over something that may or may not happen.

It was good while it lasted.

Aaron Wong
Aaron founded The Milelion with the intention of helping people travel better for less and impressing chiobu. He was 50% successful.
Previous articleIs Alaska’s Mileageplan the new Lifemiles?
Next articleNo fee Visa Infinite- with a catch

Get a 7% cash rebate on your Maybank credit cards when you spend at selected retail merchants in July.
Read more

Bank of China cuts SmartSaver interest rates, and I’m so out of here

BOC will nerf the SmartSaver account from 1 August 2020, significantly cutting the bonus interest. It's time to jump ship.
Read more

In my opinion, if prepaid card isn’t working for EZ-Link, first to drop should be FEVO card isn’t it?

possibly- even more so given that FEVO is a mastercard, and mastercard charges less merchant fees than amex which means less knock on revenue for ezlink.

FEVO charges 1% top up fee whereas imagine was free above $50..
Sackcloth and ashes indeed.. Will there be a miracle resurrection of the imagine card on Sunday? Haha

Just wanna ask if there’s any method to maximize miles payout rate now since we gotta do the refund soon in August when phased out.
Eg top to the Max and request for a refund?
Does it work?

I doubt anyone really knows, but I’ll fill it up and ask for a refund in August.

My sentiments exactly. But i can only do it in August too

The amount will charge back to your credit card. While not the same but similar. I paid a 6 thousands dollar using the DBS Amex altitude for a hospital small surgery, and proceed to made an insurance claim. The statement reflected a charge back for 5.4k, and I was only awarded 3 miles per dollar (sign up bonus period rate) for 600 dollar.

Hi Aaron. I read somewhere that paypal did not qualify for the 4x miles on the women’s world card. Can you confirm you did get 4x awarded on payments through paypal?

It did not qualify for me if I use DBS woman directly for paypal payments. I can be missing something which Aaron may be doing it right. However, I can guarantee it works if you top up imagine card with DBS Woman and then use Imagine Card for paypal transaction.

I have the fevo instead and have been using it!
I realise some of the paypass (tap and go) does not work for me. so far NTUC and Uniqlo works but those NF stations paywave stations with the citibank brand on it doesn’t work.

i’ve been using my dbs woman’s card for paypal payments and have consistently got the 4 miles per $1. mine are money transfers, ie paying someone with a personal paypal accont

Im going to trust you on this and test it out. 🙂

yup, i did. see here

Hi,
Can M1 prepaid Mastercard be considered an option as well, it’s a similar card to Fevo, (top up costs, etc)
But it only costs $5 per card ($25 for the card which gives $20 value)

You can’t top up online for M1 prepaid, hence it is not possible to get it counted as online transaction.

How do you “top up online”? I did the top ups for both my FEVO prepaid mastercard and my M1 prepaid Mastercard, and both show as “EZLINK PTE LTD (FEVO)”. Am I getting it wrong?

I’ve been using imagine amex purse to ez-reload to the imagine ezlink. Now that this option is coming to an end, I’ll be purchasing the fevo card. If I use WWMC to ez-reload into the fevo ezlink (to avoid the 1% to load up the fevo MasterCard purse), will I get 4m / $1 ? Otherwise, what’s the recommendation to get the most out of ezlink usage please? Thanks a lot.

Yes, you should be able to get 4miles/$ topping up Fevo with WWMC. I think that will be the best option post Imagine, as long as you’re prepared to pay the 1% fee.

What I meant was is it possible to ez-reload directly into the fevo ezlink with the WWMC to earn 4m/$ , thereby avoiding the 1% to load the fevo purse up first? Thanks

I’m afraid that will not work. From the TNCs

“DBS Points shall not be awarded for AXS and Sam online/ibanking bill payment transactions, and EZ-Reload (Auto Top-Up) transactions.”

Thanks for pointing that out. Guess paying 1% it will be then, until something better comes along the way 🙂