Last week I had a lovely chat with 陈劲禾, the reporter who wrote the article. We covered a lot of questions that first-timers to the miles game might ask. Obviously, because of space constraints (and my tedious wordiness) it was not possible to write about everything we discussed during the interview.

But there were some great points raised that might be useful to newcomers to the miles and points game, so I wanted to share the long version of what I prepared below

Question: What should I look out for when I’m deciding on a miles card?

This is the bread and butter of any miles card. The higher the earn rate the better, but don’t forget about sign up bonuses.

The generous promotion on the DBS Altitude AMEX, for example, should convince you to get that over the UOB PRVI Miles card (despite the PRIV’s superior 1.4 miles per S$1 of local spend)

This may also convince you to take up an otherwise crappy card, like the AMEX Rewards card ($1,500 spend over 3 months gets you 13,333 Krisflyer miles), get the bonus and then dump it.

This impacts how quickly you can cash out your miles. DBS and UOB require you to have a minimum equivalent of 10,000 miles in your rewards account before you can transfer, whereas Citibank allows it for as little as 500.  All things equal, smaller conversion blocks give your miles more liquidity.

There are 2 main models of conversion fees in Singapore- per annum and per transaction. DBS charges you $42.80 for unlimited conversions for a year. UOB/Citibank charge you a flat fee of $25 every time you convert.

Each model has its own advantages, but some people like to keep their powder dry for one big, occasional transfer.

Does the card provide you with limo transfer? What about lounge access? If lounge access is provided via a third party like Priority Pass, how many free visits do you get in a year? All these can save you some money over the course of a year

Conversely, here are 3 things you shouldn’t really care about-

I get it. We all don’t like tight timelines. But this really shouldn’t be a barrier to you getting an otherwise attractive card.

The reason is simple- let’s take the worst case scenario of your DBS Woman’s World Card, where the DBS Points expire after 1 year (fyi, DBS Points earned through your DBS Altitude do not expire). If you’ve been disciplined and regularly putting online spending onto this card, you would have at most 96,000 miles at the end of the year (or 48,000, if we use a more conservative $1K per month spend) tied to this card.

When you transfer credit card points into your Krisflyer account, those miles stay valid for 3 years. And if you believe that you will not spend enough to redeem at least 1 ticket over a 1+3 year period, this might not be the right hobby for you (you might want to consider cashback cards in that case)

At most what a short expiry date means is that you have to incur the conversion fee more often. But if given a choice between no-expiry AMEX membership rewards points or 2 year expiry UOB UNI$s, I know which one I’d rather have.

A common mistake first-timers to the miles game make is to assume that the SQ co-branded AMEXs must be superior to the banks. After all, it’s directly linked to SQ!

Don’t believe the marketing hype. The co-branded AMEXs offer the worst deal out there. The only perk is the no-cost miles transfer (because the miles are directly banked to your KF account). Even with the scheduled re-launch of the Krisflyer AMEXs, their earn rate will still lag behind the cards offered by the banks

And if you don’t fancy having any cash outflow, a simple call can get these fees waived (assuming you did have some activity on the card during the year).

Question: I want to earn lots of miles but I’m lazy to get multiple cards. Can’t I just do all this with one card?

No. You can’t. Like it or not, that’s just the way this works.

I get questions like this all the time from friends who say “yeah, all that miles earning sounds great but it’s too complicated for me. What is the one card I should get to do all this?”

Let’s look at an example of how the “one card” strategy is clearly inferior. Suppose I spend $15,000 a year on my credit card, split as follows-

If I used one card and one card only, even if that card were the UOB PRVI (which has the best general spend rates in town), I’ll end up with 23,000 miles.

Then suppose I split that $15,000 over several cards and carefully used the right card for each category- I’d be sitting on 47,000 miles at year end, more than double that I’d have otherwise.

Question: It takes too long to accumulate miles for business or first class travel. Why shouldn’t I just redeem them for economy class tickets?

I’ve addressed this in a separate article, but it bears repeating because so many people fall into this trap.

Look at how your cents per mile increases as you redeem a higher cabin class.

Why does this happen? See the table below-

The surcharges on your award ticket are roughly the same regardless what cabin class you redeem. So we should only look at how the miles required change versus the revenue.

Business costs 3X economy  in terms of buying the ticket outright but only requires 2.3X  the number of miles. First class prices at 2X business for revenue but 1.3X for miles. Therefore, mathematically your cents per mile increases.

Value aside, I’d also encourage you to think about access. How many of us would ever be able to experience something like Singapore Airlines Suites if we had to pay for it? Miles allow you to access such experiences that would normally not be financially possible for you. And that, to me, is the true value of the game we play.

Question: The OCBC Voyage card lets me redeem my miles with any airline. That’s good right? Why shouldn’t I get that instead of DBS/UOB which restrict me to SQ and CX

Because the OCBC Voyage is a horrible, horrible card. TL; DR version- we saw in the previous question how your miles have “variable value” in the sense that they “buy” more value when redeemed for premium cabin travel.

OCBC Voyage issues you something called Voyagemiles. These are not the same as airline miles.

This is OCBC’s internal currency, and the value is fixed around 2-3 cents each.

Suppose a flight normally costs $X, but during peak periods it now costs $2X. The Voyagemiles required will increase from Y to 2Y. SQ on the other hand, fixes the cost of the awards regardless of what the underlying ticket is selling for (you could argue that during peak periods it’d be hard to get award tickets, and you’re right, but the same argument applies to the Voyage card in that peak periods may require inordinate amounts of miles to redeem)

It is precisely for this reason that OCBC Voyage cannot publish an “award chart”- the miles required will keep changing depending how much that particular route costs for that particular time of year, airline and cabin class. You have to call in each time to ask them how much redemption costs. 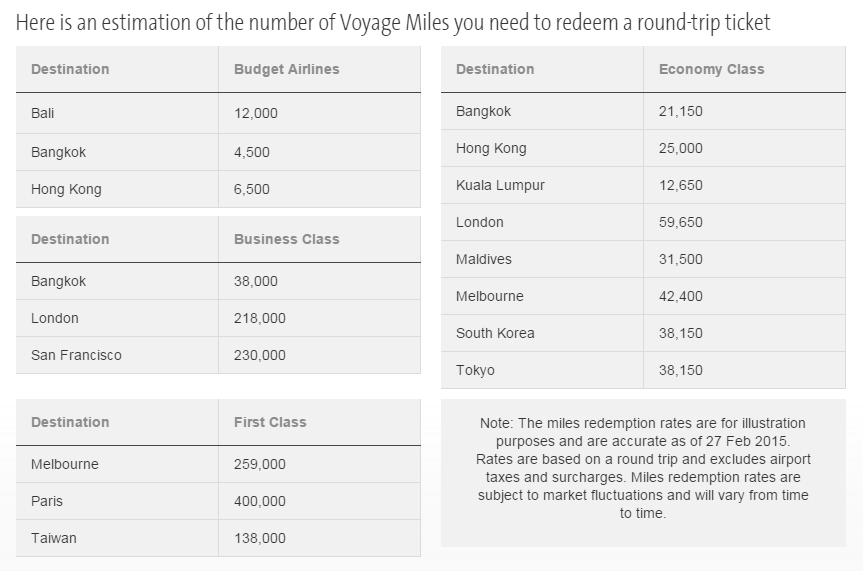 A SIN-CDG round trip first class costs 400,000 Voyagemiles (and not even including airport taxes and surcharges!). SIN-CDG with SQ would cost 182,750 miles at the Saver level and 357,000 at the Standard level.

The big con of the OCBC Voyage card, therefore, is that it is NOT a miles card. It is in fact, a cashback card. Because it always gives you a fixed % back. The irony of the OCBC Voyage is that although it is marketed as a mass affluent card, the way to get the most value out of it is to redeem your Voyagemiles for budget or economy class tickets.

Here’s a useful table I compiled just for illustration’s sake that talks about the different partners each bank has, the conversion fee, blocks and points expiry.

I refuse to acknowledge the OCBC claim that since their Voyagemiles can be used on any airline, it’s like they’re partnering every single airline.

Hope you find this useful!

Aaron Wong
Aaron founded The Milelion to help people travel better for less and impress chiobu. He was 50% successful.
Previous articleThe Milelion is featured in Zaobao!
Next articleUOB “Enhances” the PRVIMiles card

I think there is expiry for citi rewards or thank you points. Its 5 years.

For citi miles ( citi premiermiles) and citi dollars (citi prestige), there are no expiry dates.

thanks naro. have updated it to avoid confusion (The context of our discussion was around the miles cards only but it’s good to give the full picture)