Continuing our analysis where we left off in the introduction, let’s take an in depth look at the features of the OCBC Voyage Card, and more important, the maths behind it 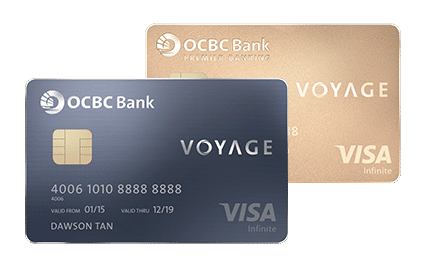 The annual fee for this card is S$488, and cannot be waived. You get 15,000 VMs as a sign up bonus. The card itself is made of metal- probably the first mass affluent metal card to come out, after the Centurion, DBS Insignia and UOB Reserve.

Perhaps disappointingly for a card targeted at premium users with a high annual fee, the Voyage Card doesn’t come with any Priority Pass. You get 2 lounge visits per calendar year through vouchers. That’s it.

You get complimentary limo transfer to the airport with a min S$5,000 spend each month. That’s much higher than other providers- ANZ Visa Travel Card offers it with S$2,500.

Intuitively, this is much lower than what other cards offer (eg UOB PRVI Miles with 1.6 miles (soon to be 1.4) on local spending and 2.5 miles on foreign spending, UOB Preferred Platinum with 4 miles on dining). However, we have emphasised repeatedly that VMs are more valuable than Krisflyer miles, because they are not subject to inventory restrictions or conversion fees, plus they earn miles of their own when flown.

Here’s where it gets interesting. Attached below is the published “award chart” for VMs. Because VMs can be redeemed with any airline and destination, there is no fixed award chart like airlines have. What I suspect is that OCBC assigns a VM some monetary value, then works backwards from the cost of a commercial ticket to get the VMs needed.

Note that the chart below does not include taxes and fees ,these are additional (but can be paid using VMs too- way to go for transparency, OCBC) 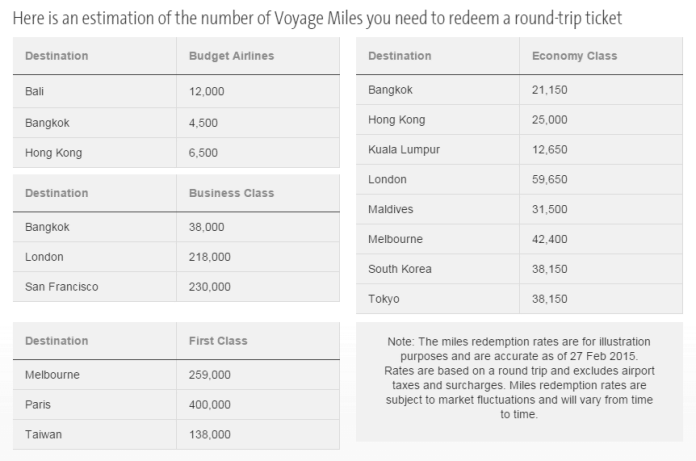 Let’s see if we can prove this through some sleuthing work of our own.

When I put together the data points, I get the following table. I’ve made 2 assumptions – first, that the VMs required are for SQ tickets. Second, that for economy tickets, the prices are for a fully-flexible ticket (upgradable)

One thing that is coming out of this analysis is the average value of a VM is roughly 3 cents. Suleyman over at HWZ has done similar number crunching and come to a slightly higher conclusion of 3.5 cents

“I did a comparison using SQ Economy (using SQ flexi fares), Business and First/Suite fares. The business and first fares come out consistently to about 34 VM/$ (except for Taiwan as SQ has no First Class fares to Taipei). Economy fares went as high as 4% but I see those as less accurate since there can be quite a bit of seasonal fluctuation in Economy fares.”

The other, interesting conclusion Suleyman has

“Because the ‘rebate’ percentage is consistent across all classes, the card is actually better for redeeming Economy class tickets rather than premium class seats.

When redeeming from KF charts, miles are worth about 2c each when redeeming economy, 4.5c for business and 6c for first (this takes into account surcharges that needs to be paid for award tickets). So, this card will trump the best general miles earning card out there (UOB PRVI Miles – 1.6 miles/$ or 3.2c/$) when redeeming in Economy. For dining & overseas spend, it will still compare favorably with the 10x cards like UOB Preferred Platinum Amex & UOB Visa Signature (7.82 c/$, compared to 8c/$), but you have no issue with award availability and earns miles on the ticket

Conclusion is that this is the miles card to get if you are looking to fly economy class (perhaps even budget as well), which is an odd place to be in for a card targeting affluent/HNW…”

He’s hit the nail on the head here. So let’s say a VM has a fixed value of 3 cents. Recall that we said the value of a KF Mile varies depending on how you redeem it– from as low as 2 cents in economy to 7 cents in first.

Based on this math, the only sensible way of using the Voyage Card is to use it for general spending and earn economy class tickets (the Voyage Card loses out on specialised spend- S$1 on dining earns you 2.3 VMs ( 6.9 cents) versus 4 miles (8 cents economy, 16 cents business, 28 cents first) on the UOB Preferred Platinum card)

However, it’s good to emphasise again that the maths is not conclusive- you need to decide how much value you place on certainty. A Krisflyer mile is worth 4-5 cents IF you can redeem it for a business class saver ticket. A VM is ALWAYS worth 3 cents because you’re guaranteed a seat so long as commercial availability is present.

The value of a VM increases slightly when you consider how many miles you will earn from a VM-redeemed ticket. I’m not able to think of a way to value this option, but when you factor in the high annual fee and the lack of other perks I’m sure there’s some offsetting going on.

I realise this is a lot to take in, so my final thought on this is- if you ALWAYS redeem for business or first saver (or don’t redeem if neither is available), the Voyage Card is a bad deal.

The Voyage Card is so hard to assess precisely because we’ve never had anything quite like it in Singapore. On the one hand, I applaud OCBC for coming up with something new- the ability to redeem miles on any airline. On the other, I can’t help but feel this is more like a glorified cashback card. The VMs they give to you have a fixed value- OCBC is essentially giving you a 3% cashback card with special cashback bonuses for overseas and dining spend. Viewed this way the Voyage Card is really another failed attempt by OCBC to break into the miles market. They’d better hope people really have a fetish for metal cards, because the math certainly isn’t in their favour.

Why not learn about some better miles-earning cards here?

Wow, just chanced upon your blog and this is great stuff! Love it!

Hi there Mark! Thanks for reading. I’ve actually been following your blog ever since you got listed on boardingarea. I think there’s a lot I can learn from what you’ve been doing. I’m on vacation now but if you’re free over the weekend I’ve love to connect properly

Hi Aaron! Wonderful breakdown on the card. Thanks for the hard work! With regards to a lack of local dining card to use (both UOB PP Amex and Citi Clear Plat seem discontinued, the backup card is a general spending 1.4miles/$ UOB privmiles or ANZ travel), will this card finally shine? Given that 1VM can be converted to 1KF at a fee, and that it earns 2.4VM/$ spent on local dining. Extracted from a CSO’s reply on a certain SG-based forum: “There are charges to using your Voyage miles to redeem for KrisFlyer miles. 1,000 KrisFlyer miles = 1,000 Voyage… Read more »

well dude i really dislike the voyage card on principal because it pretends to be a miles earning card but it’s really a cashback card with a call option for miles. That said, I acknowledge that the voyage card can be useful if you use it exclusively for dining (but remember the non waivable $488 upfront annual fee (which does come with some free miles but not at a 2 cent per mile value…)). You might want to call up citibank and check if you can apply for citiclear plat over the phone. got some mixed news on whether that… Read more »

Excellent insights. Is anyone able to share any feedback on the voyage concierge services? Hearsay it’s good….

i’ve heard good things about them. but at the end of the day the issue isn’t the concierge, it’s the fundamental value proposition of the card. I mean it’s great if they can find me 5 options within 15 mins, but if all those options give me the same 3 cents per mile value I’m not much better off.

Hi there
thanks for the article!

the OCBC voyage card also offers another option to renew with an annual fee of S$3210 but gives 150,000 KF miles in return.

isnt that a good deal? in addition, if u have an OCBC 360 acct and charge your monthly credit card charges of >$500 u get some rebate as well i think?

yes and no. no in the sense that you’re paying 2.14 cents per mile and the general rule of thumb is not to pay more than 2 cents per mile. yes in the sense that i cannot think of any other opportunity on the market to buy this quantum of miles at one go (eg other credit cards may sell you miles for 1.92 cents via annual fees eg dbs altitude but that will be 10,000 miles at most). so what you are paying for 2 things. 1. the miles 2. the opportunity to buy this many miles at one… Read more »