EDIT: This appears to be a targeted promotion

Although OCBC lacks a good general spending card, it may still be worthwhile getting the Titanium Rewards card assuming you intend to spend a good deal of money on the aforementioned categories (and can’t get a HSBC Advance for your online spending). One big advantage the Titanium Rewards card has over similar positioned cards like the DBS Woman’s World Card is that DBS points expire after 1 year whereas OCBC$ are valid for 2 years.

For the CNY period, OCBC is running a 15X point promotion on the Titanium Rewards card. 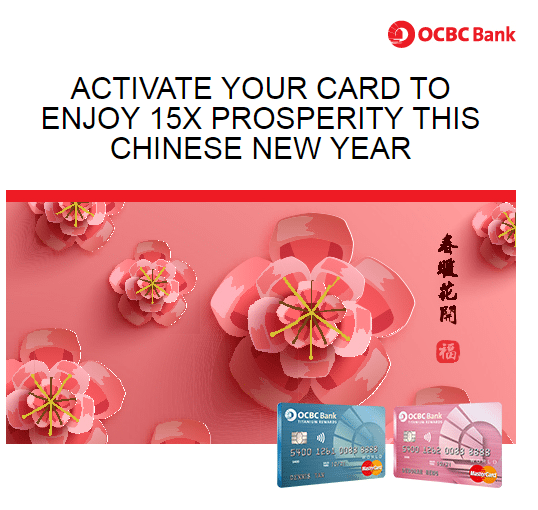 This earns you the equivalent of 6mpd on

Remember that your mobile payments with Samsung Pay, Apple Pay and Android Pay qualify for the 15X (and 10X regularly) bonus with OCBC.

Aaron Wong
Aaron founded The Milelion to help people travel better for less and impress chiobu. He was 50% successful.
Previous article
Does buying a walk-up upgrade with Thai Airways make sense?
Next article
Why would I want Delta Skymiles status?

Does anyone know if Apple Online qualify as Computers or Electronics?

thanks aaron! i literally just signed up after reading your post and got my confirmation in 5 minutes cause i have an existing OCBC 360 account. i’m planning to build my own desktop so i figured this card will come in handy. just a quick question: do you think the Sim Lim Square PC retailers code as “Electronics stores”? as far as i know they have a surcharge if you make payments via credit card so i need to think if the surcharge is worth it (it probably is if it gives me 6mpd) otherwise i will just pay by… Read more »

I also have OCBC360 but OCBC said will let know the result after 2-3 working days, you only 5 minutes. Do you have other OCBC Credit Card(s) with them ?

SLS is tricky, a lot of grey area stuff there. A safer option would to be buying through Qoo from SLS shops. (Gamepro/Videopro/+++)

They did 15X for the Xmas and New Years long weekends in Dec/Jan as well. Hopefully they will repeat it every long weekend. At the moment it has displaced by Citi Rewards until I spend the $500 per month to qualify for extra interest on the 360 account. Citi is still preferred after that since I already have a stack of points with them, their points are valid 5 years, and at the moment their 10x mobile payments has a separate threshold from their normal threshold. Pendantic, I know, but meh haha. On the issue of point expiry – DBS… Read more »

Just received my card today, any idea if this applies to each card (blue/pink) or both combined?

Promo is auto or must sign up for it?

where are you seeing that? doesn’t seem to appear in the t&C

ah….thanks for pointing this out. will update.

This is poor. Very very poor. I spent based on the T&Cs provided, so I will argue this very very hard. Very disappointed, their marketing team quickly becoming as sneaky as UOB’s, and that’s not a good thing.

oh dear. me too. but still can get 4mpd right at least?