Financial alternatives to UOB Krisflyer and reflections on a crash

What are your alternatives to parking money in a 0 interest account?

A lot has been said in recent days about the new UOB Krisflyer account, not just on this site, but by others in the general finance space.

So I’ve made my stance on the matter pretty clear. Still, I’d encourage those of you who are undecided to have a read of some of the coverage on other sites like Dollars and Sense, Moneysmart and even this one piece on Bank Bazaar that tries to take an alternative viewpoint. Read up, understand the product, do your sums and come to your own conclusion.

The only thing I want to add to this is the one piece that was missing from all my analysis- what the opportunity cost of putting your money in a 0 interest account is. I mean, I did talk about it in terms of miles, but I didn’t talk about alternative investments like fixed deposits, equities and the like.

This is because I’m terrible at investments. I mean, I collect miles for goodness sake. They don’t earn interest, they’re not insured and they can only ever be devalued. But man, the experiences you have…

Fortunately, Fiona from SG Budget Babe is better at such things, and she’s kindly prepared some alternative investment options for your consideration (for the record, she was the one who gave me the heads up about the influencer posts that were going around Instagram).

I’d encourage you to have a full read over on her site, but here are the key tables for your reference. The investment options here aren’t exhaustive, of course, but they’re common financial instruments available to most investors.

I’ll discuss the 1 year investment horizon scenario here (she’s prepared a 3 year scenario on her site as well), because we’re not clear what will happen to the UOB Krisflyer earning rates after the first year promotional period, and where equities are concerned we need to make significant assumptions the further out we go.

For a 1 year investment horizon 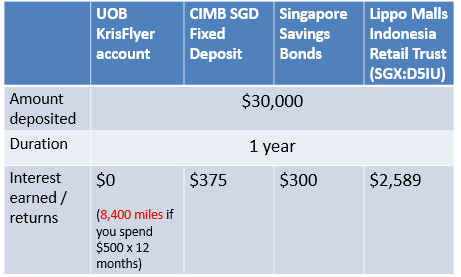 For a 1 year investment horizon, assuming a $30K deposit and $500 card spending a month, you’d have 8,400 miles with your UOB Krisflyer account. Assuming a 2 cpm value, that’s about $168 of interest. This is slightly over half what you would get if you put it in 0 or virtually 0 risk investments like Fixed Deposits or SSBs. If you were willing to put it in a REIT, you could get significantly more (assuming, of course, you pick the right one) not just from dividends, but capital gains as well.

Even if you spend $1,000 a month, you’d be on 16,800 miles or roughly $336 of value. I realise that’s on par with the 0 risk investments, but you need to factor in the fact that miles are a non-liquid currency. In any case, I’m going to fall back on my thesis statement made elsewhere that if you’re after miles, there are better cards for getting them.

Reflections on a crash

On another note, The Milelion had a server outage that started intermittently around 9 or 10pm last night and escalated into a full website crash all the way until 10.45am this morning.

I am clueless about IT issues (I’ve barely poked around my back end, fnar fnar) and in the space of time between I woke up at 6am to full restoration, I had to learn a lot of acronyms I’d rather not know like CDN, DDOS, TOS, DNS… 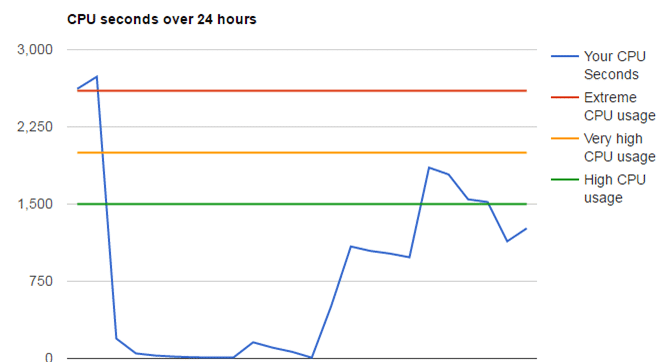 Suffice to say, the diagnostics showed the crash was due to a spike in CPU usage beyond which my hosting plan allowed. This caused the hosting platform to suspend access to the site until it was optimized. This has since been done and regular services resumed. I’ve also upgraded the site’s security to prevent a future recurrence.

I don’t have enough technical knowledge to say whether this spike was because of the sheer number of visitors (we crossed 50K yesterday (and imagine what that would have been without the outage!), compared to the usual 3-4K) or whether it was caused by something malicious, and it would be irresponsible to speculate (Russians!).

But I do thank all of you who reached out to let me know something was up, and the others who offered to put me in touch with IT people/other hosting services who could help me resolve it. It means a lot to me that you’d go out of your way to render help to someone you met on the interweb.

It’s quite incredible how the past 7 days started with the excitement of what seemed to be a game changing product, turned to disappointment when the fine print was revealed, turned to ridicule at the defense raised by the bank, turned to anger at the influencers involved in promoting a product they clearly knew nothing about.

What is important to me is that The Milelion and its guestwriters continue to call things as we see them, and maintain the highest standards of ethics in our writing.  I was very moved by the support in the comments section of the influencer article, and will work tirelessly to keep the trust you guys have placed in this site. So keep reading, keep questioning, and keep taking part in the comments and FB discussions. Let’s make this a place where anyone can learn to travel better for less.

Aaron Wong
Aaron founded The Milelion to help people travel better for less and impress chiobu. He was 50% successful.
Previous articleDoes Singapore Airlines “give chance” with elite status requalification?
Next articleA Milelion Giveaway to Mark a Special Milestone (updated with the winner!)

“Let’s make this a place where anyone can learn to travel better for less.”

The last sentence says it all.

Terrific blog, loving it! Are you using WP Super Cache? That might help with your occasional traffic/cpu spikes.

The 2nd group hug picture of the ponies are cute lol!

Why not HSBC Advance Visa Card for dining?

There’s always going to be a sort of inertia for new applicants for this card because you’ll think- by the time I get the card, the 10x promo will almost be over. Then 10x gets extended and you curse your inaction. That was me, for a while. Glad I pulled the trigger a year ago

Ya exactly right? And I already have enough material to do a modern remix of Alanis Morisette’s Ironic.

Maybank Horizon.. hmm. Might consider that, but it’s pretty much a standalone card. If anyone else has better ideas, always willing to try!

I dint get PPV Amex and got rejected for Advance. Don’t eat often out. M1 prepaid is the best option so far.

Up to the moment when you get message ‘merchant is not supported’ when you try to top up, like this morning.

I’ve just applied for the PPV (to pool points with my PRVI). Since many dining establishments accept Paywave, I figured this would be a passable dining card. Consider the HSBC Revo if your dining and online expenses are high enough to help you gain a critical mass?

Side note on the Advance: In view of the upcoming expiration of the 10x promo, I’m prepaying my M1 and Starhub bills for the next 12 months..

the UOB PP AMEX is dead as in no longer can apply or the card no longer dish miles for dining?

she means no longer can apply. although ymmv…

Everyone who collects mile should refer to this blog page period.

Great blog and good info as always. Thanks.