I got a tip off from a reader that DBS will be changing its overall rewards program T&C with effect from 2nd July. 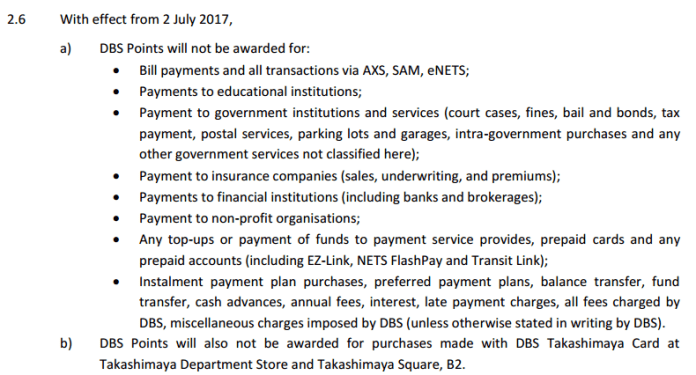 One might be confused when seeing this because of the impression that such payments never earned points in the first place. That’s not strictly speaking correct. These transactions do earn base points, but don’t qualify for bonus points earning on category spend cards like the DBS Woman’s card.  You would be able to earn regular points on things like insurance payments with other cards like the DBS Altitude.

Why has DBS done this? It all goes back to encouraging discretionary spend. Most of the categories they’ve explicitly mentioned are non-discretionary spend that consumers would have to make regardless, so DBS doesn’t feel the need to incentivize that sort of spending with points. Where donations/payment to non-profits are concerned, I believe that DBS charges such parties a lower merchant fee and therefore doesn’t want to award points on such transactions.

The other LOL-worthy amendment is that DBS points will not be awarded for spending on your DBS Taka card at Taka. I’m trying to see the logic in that and failing, but I never owned a DBS Taka card anyway so I’m not too bothered.

It’s also interesting that there is some internal inconsistency among the various DBS credit card T&Cs. For example, the T&Cs for the DBS Woman’s card explicitly exclude iPayMy and Cardup from earning any DBS points at all, but the overall rewards program T&C is silent about this. Here’s the equivalent section in the DBS Woman’s card T&C.

My interpretation of this is that if you use your Altitude card to pay iPayMy you should still earn regular points as per your cardholder agreement (i.e. $1= 1.2 miles). Whether or not it’s worth paying the processing fee to earn 1.2 mpd is of course another question.

We’ve recently seen banks starting to tighten their T&C regarding points earning. UOB recently updated its T&C for the UOB PPV, which will take effect from 1 July. The new T&C explicitly provides the MCCs that qualify for 10X points earning on the UOB PPV to the excvlusion of other categories. That said, I wouldn’t get too worried about it. T&Cs change all the time, and although it’s annoying to have to change your gameplan when they do, there’s no reason why you can’t still beat the system if you plan enough.

Thanks to Putera for the tip.

Er… confused leh. So what exactly has changed.

Will DBS altitude still earn $1/1.2mile if we top up ezlink card at GTM?

Wait and see. Not all banks strictly enforce all their T&Cs… (eg how WWMC+FEVO was kept alive for so many months)

No, received 0 points for transactions in Jul, Aug

Does this mean the pocket guide needs to be updated too?

So no more topup of FEVO for Altitude as well?

Anything else? Seems there is no option is left to earn 4mpd on online spend.

As I see, any big ticket online purchase except airfare is excluded.

Taka card is simple: you get taka points for shopping at taka. The change above now stops the double dip where you earn both taka points and dbs points for taka spend.

Hi Aaron, “….These transactions do earn base points, but don’t qualify for bonus points earning on category spend cards like the DBS Woman’s card. You would be able to earn regular points on things like insurance payments …” I don’t think they earn base points too from my experience. Regarding discretionary spend, I’m agree only to a certain extent. Paying phone bills is a non discretionary but still get bonus points and say grocery shopping is arguably a non discretionary expense too but awarded bonus points and high cashback ( hope I didn’t incur your wrath by mentioning this taboo… Read more »

I pay insurance Prudential and lately F with DBS Visa altitude and yes, they earn base point (1.2 miles/$ )

You can pay your insurance premium using your credit card via Cardup, but do note that they charge a 2.6% processing fee. It is worth it if your card offers you 10x points (4mpd), and even better if you get $20 off the processing fee you pay by using my referral code CHUNKIATL59

APART from CardUp. Anything?

Oh, my apology. I’ve seen another post on CardUp on this blog with nearly everyone who’s left a comment leaving their referral codes, but alas….

You can try iPayMy, which is similar to CardUp.

Well, from 2nd of Jul that is moot point. And AFAIK, only DBS cards could be used for insurance payments.

Question is – is it possible to use other card and which one will award points with the insurance payments?

Really? I could be mistaken but quite certain I got base points when I used my altitude to do a payment for government services.

Re: discretionary spend- phone bills are definitely non discretionary but I think the reason why bonus is possible is more of an oversight than design. Grocery shopping to my knowledge doesn’t get miles bonus, only cashback bonuses. And those grocery cashback bonuses usually involve spending a high minimum spend per month eg Citibank dividend

I am finding the alternative way to pay my prudential insurance and EZ-Link auto reload.

I think American Express Krisflyer card is one of the better option.

With Altitude going away seems the only remaining option is HSBC Rev and with top and tap – good luck with that – it requires Java 1.6 – they have not updated it last 5 years.

Here goes a way to pay Singtel bill if you are on corporate account….

I might be mistaken but the only option to pay Singtel bill when you are on corporate account is via AXS – you can’t create your own account.

Answering my own question – seems I need to pull Chase card from dark drawer and use it for Singtel and VQ.

No base points for fever using Altitude?

Altitude has been giving 1.2 mpd for EZ Reload. Now gone?

Has anyone tried whether PayPal payments count as online spend?

I vaguely remember Aaron says he uses it for PayPal transactions but that was a while ago. Can’t remember where he posted it but.
Aaron can you confirm again mate?

when i used dbs wwmc for a lot of paypal payments in 2016, I consistently got 10x points. Keep in mind these things can change without notice, though.

Any more recent PayPal examples, particularly after fevo got cut? Thanks mate

Just wondering.. so what credit cards can be used to pay for insurance premiums?

i suppose HSBC Advance is pretty good given the 3.5% rebate (for Advance customers, otherwise its 2.5%)

Effective July 2nd…. hmm…. may be worth a punt on Altitude for transactions on Jult 1st

It follows posting date, not transaction date so I wouldn’t punt about these things if I were you. I have had transactions being posted more than 5 days later than transaction date (it really depends on when merchant “charges the card”, not so much when the bank registers the charge)

I asked DBS about the Womans card a while back and they told me it was based on transaction date, so I am a bit confused haha.

recently there is much debate going on the ‘transaction date’ vs ‘posting date’ on HWZ forum. you may wish to check that. Seems like it is going by transaction date.

Just to be clear, the ‘payments to insurance companies’ exclusion clause would mean that if I buy a single-trip insurance plan I will not get 4 mpd?

any idea if payment of s&cc fees to town council will earn base points?

Should be, transactions to SP Services in Jul, Aug received base points

Prudential Premiums via Credit Card Payments using the automatic monthly deduction no longer earn points on DBS Altitude, noticed nothing has been posting since August 2017.

Hence i switched to REVO for the premium.

If you mean HSBC revolution, then did you pay premium online at Prudential site or by some other means?

By loggin in to pruaccess and select pay by CC. Full in your cc details and the premium will be charged to your cc monthly.
There are 2 “other cards”. I believe 1 is for mc, the other visa. Since there’s only 2 option, it won’t take long.

Thanks. I would assume that full payment can be made as well.

Yearly premium at once, instead of monthly installments.

I think pruaccess only allow you to input your credit card number and then they charge your card on the due date. I tried to pay earlier than the due date but cannot find the “pay” button on the website.

Why not change your premium from monthly to yearly by writing in to Prudential? Isn’t it applicable to all policy?

Perhaps can consider using HSBC Revo to top up Fevo S$199 every month, and then use Fevo to pay S&CC, PUB and other misc charges via e-AXS.

Does anybody know if FEVO and top-up EZlink is $200/mo for both or for each of them? In other words, if I top up FEVO for $200 will I get separate $200 for ezlink card topup via GTM?

If i am not wrong, 200 cap is applicable to top up via ezreload. If you top up directly to fevo ezreload then it is capped at 200. If you top up to fevo wallet, then it should be considered as “online” category under revo.

Seems both will be capped at 200. Not mutually exclusive of each other.
With effect from 1 October 2016, for Online Transactions which involve any pre-paid card top-ups including but not limited to EZ-Link, Transitlink or NETS Flashpay, 5x Rewards points are capped at 1,000 HSBC Rewards points per Account per calendar month (i.e. up to S$200 spend).

I’m new to credit card. I recently signed up for DBS Altitude card. Does it mean that even if I pay my M1 bills using the recurring payment method, I will still not get the points? I’m not considering the Cardup because it just makes computing more complex.