DBS’s acquisition of ANZ’s consumer banking arm has led to a lot of questions for ANZ credit card holders. What will happen to my existing ANZ cards? My ANZ points? Do I need to cash out my ANZ points? If so, when? 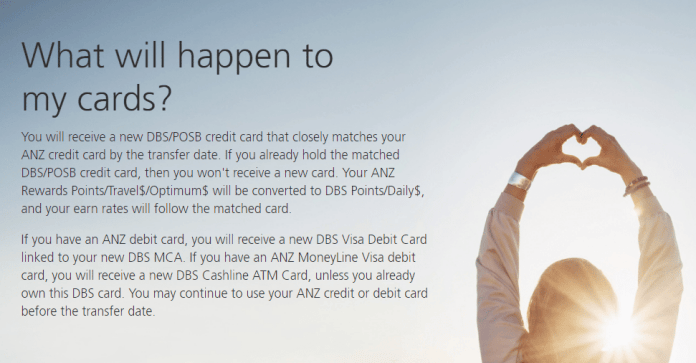 There’s been some speculation about this, with ANZ cardholders recently getting a notice that their points and cards will transfer over to DBS equivalents, but we finally have some concrete word from DBS as to what will happen.

I mentioned that the fair ratio to convert ANZ Travel $ to DBS points would be 2:1, because 1 DBS point is worth 2 miles with Krisflyer and Asiamiles. That’s exactly what has happened.

Similarly, ANZ Rewards Points are valued the same as DBS points with 1 point getting 2/5th of a mile. The conversion ratio DBS is offering is equivalent.

Although your ANZ Travel card’s Travel $ had a maximum validity of 5 years, once they’re transferred over to DBS they will have no expiry, in line with the no expiry policy for points earned through DBS’s Altitude cards.

However, if you’re a holder of ANZ’s Platinum or Switch Platinum cards you’re going to lose out. These points were valid for 5 years, but when they transfer to DBS they’ll only be valid for a further 1 year after the date of transfer, in line with DBS’s points expiry policy for its non-Altitude cards. 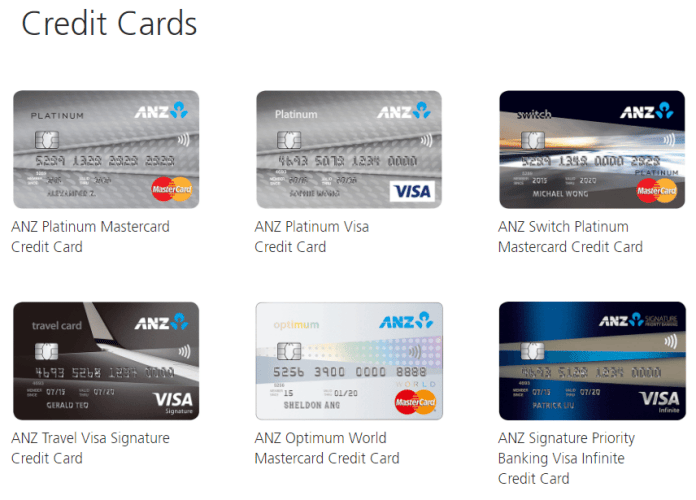 There’s a mapping tool on the DBS FAQ page that shows you what ANZ cards map to what.

If you already own the DBS card that your ANZ card will be mapped onto, DBS will transfer your outstanding card balance to a new DBS card account opened exclusively for the payment of your outstanding balance. This account is transitory and is not for further transactions. Whatever rewards points you have will be transferred to your DBS account.

ANZ’s departure from the credit card market in Singapore is unfortunate insofar as it means less competition, but we all know that ANZ’s cards were dying a slow, undignified death in recent times, with the devaluation of several key benefits. So I don’t think too many tears will be shed about that.

Sorry, fairly new to this kind of thing, is this going to be an automatic thingy? Meaning there’s nothing to be done from our side and they’ll link it to our DBS account (if any) and port over the credit card and its points via our information (eg. NRIC)?

Any idea “when” this will happen?

The ANZ Signature Priority Visa used to give up to 8mpd for overseas spend. They stopped it earlier this year with the impending DBS takeover. Very sad to lose this benefit.

I’ve been a backer here of the ANZ 1.4mpd earn rate before, even after the benefits were stripped away, because it offers a more genuine 1.4mpd without UOBs absurd double rounding down and it’s lengthy exclusion list. Might I add that they run some pretty decent cash rebate promotions too – I just got $100 credited to my account for my travel and foreign spending a few months ago.
I will definitely be a sad former ANZ cardholder, and I wonder now whether UOB will see this demise of competition as an excuse to cut the PRVI earn rate.

might be a good idea to stop using the ANZ card a few days prior to the handover as amount charged during that period might be posted to the dbs altitude card which gives 1.2mpd instead

Jus got my ANZ travel$ ported to DBS points. Since there is no expiry for these points, I am wondering how do we differentiate the points earned from Woman’s World Card since these points have an expiry.

DBS points are tagged to a card, and banded into expiry months.

They are shown separately in your credit card statement.

Go to the rewards site where you redeem your points, and look at your points balance there – it breaks the points down by card

I found that the ANZ points had been converted to DBS points and they are currently under another card which I have yet to activate.

The problem is that the new DBS card that I got is not that appealing to be activated /used.

Can I opt not to activate the card and keep my ANZ points, would they disappear if I don’t activate the new card?