Until Bangalore, I’d never stayed in a Ritz Carlton Hotel before. Their properties were always too expensive and they weren’t part of Starwood anyway, so they never came on my radar, even for work trips.

But with the recent Marriott acquisition and the upcoming merging of SPG and Marriott Rewards (boo), I figure all my Marriott nights will eventually be rolled into my SPG lifetime totals (or more accurately, vice versa) so there was no harm getting a few of them on the board. Plus, my company had a pretty hard to beat US$120 corporate rate at the Ritz Carlton Bangalore.

The hotel is amazing and I’ll be doing up a full report eventually, but one thing I’d like to talk about today is the service at the Ritz Carlton. I’d heard stories about it, but I’ve always been a bit skeptical about just how good service could be, and how it’d be relevant to me. You see, I like to keep to myself normally and don’t really go out of my way to interact with hotel staff beyond the regular pleasantries. So I’m sure that many of the hotels I’ve visited in the past had good service, I just didn’t avail myself of it. That said, the Ritz Carlton Bangalore set a whole new standard for doing things. Here are some of the highlights.

Taking care of my mishandled baggage

Long story short, I had a very unfun misadventure with my bag and Omanair (full story will come in the trip report) where my luggage got delayed more than 30 hours in Dubai.

I eventually got my bag back, but to claim my travel insurance, I needed an official letter from the airline stating what time my bag was returned to me. This proved harder than it sounded, given that the staff at the Omanair Dubai luggage office were fond of not picking up the phone, dnata ground services were fond of saying it wasn’t their problem and I was now in a different country altogether. 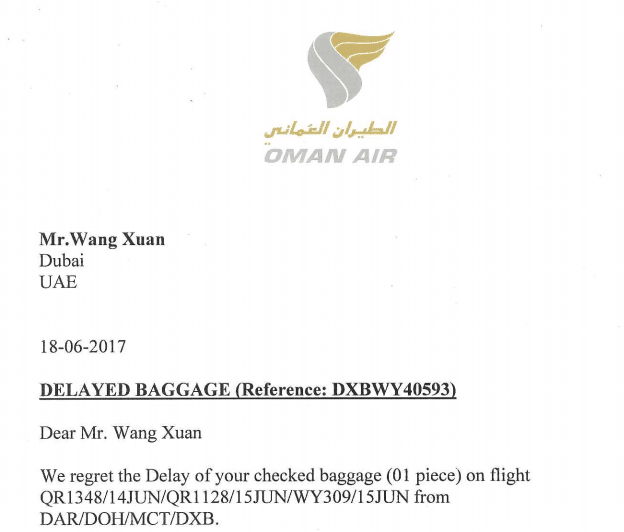 After many calls, I eventually got my letter from Omanair. But they somehow

I deeply suspect the staff at Omanair have difficulty getting dressed in the morning without assistance.

I really wasn’t looking forward to calling them up and waiting on hold to get this all sorted out, so I explained the situation and asked the club lounge team for help. They called up Omanair in Dubai and, get this, got the concierge team at the Ritz Calrton Dubai to visit the airport and get things sorted out. I guess that’s one way of sorting out people who don’t pick up the phone…

The spectacular thing is that despite all this effort, the Omanair team somehow contrived to send back the same letter with only the flight number corrected. It took a further day of calling by the concierges at the Ritz and Grosvenor House in Dubai to resolve this. Stay tuned for my Omanair report by the way…all i can say is never again.

The takeaway here, however, should be how impressed I was that the Ritz in Bangalore was able to rope in people on the ground in Dubai to get this attended to. I shudder to think how long it would have taken me to get this sorted out by myself.

Getting my shoes repaired

All that walking around the world had worn a hole right through the insoles of my favourite pair of loafers. I knew from my time in Mumbai that there are plenty of cobblers on the streets who repair this for next to nothing, but I didn’t trust my ability to communicate/not get ripped off. So I passed the shoes to the staff at the lounge and within 2 hours got them back, good as new, and for all of $3. Incredible.

Resolving a prawn vs lobster debate One evening, my colleague and I dined at Lantern, the hotel’s dim sum restaurant (40 days without Chinese food was getting to me). One of the items we ordered was called “lobster moneybags”, but biting into it revealed it was just regular prawn. I mean, that’s not honest advertising, but I didn’t make a big deal of it at the time. 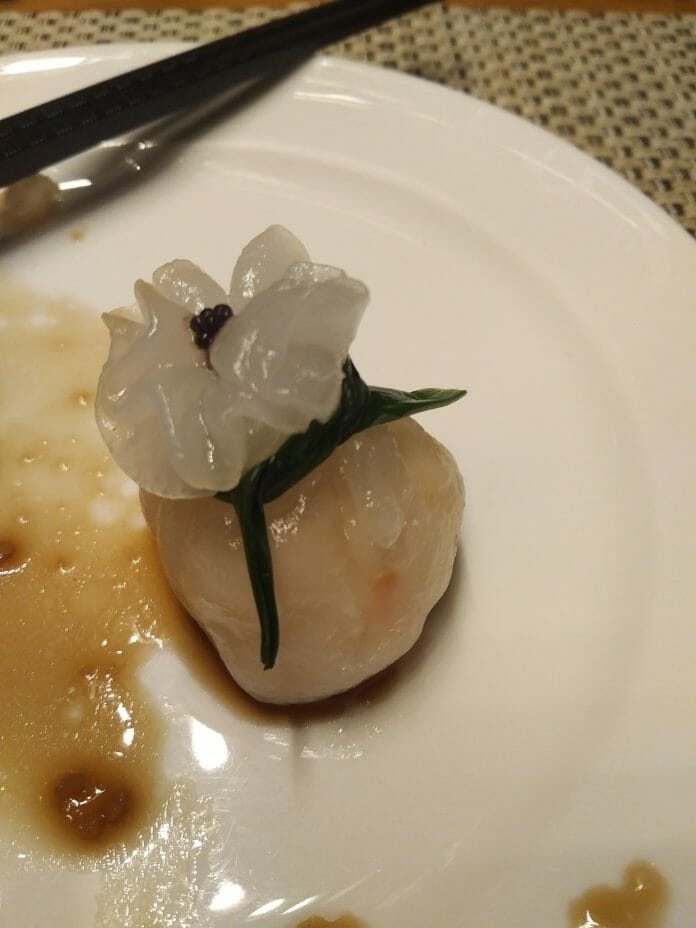 The next day I went back to get lunch (I’m boring that way) and mentioned it in passing to the staff when ordering. They apologised and I thought nothing more of it.

But a few minutes later the (Chinese) chef came out to chat with me and told me it was indeed a mix of lobster and prawn, but mostly prawn (I am embarrassed I did not know what lobster was in Chinese. Turns out lobster literally means “dragon prawn”. I was tempted to say “da xia” (big prawn)).

When the dishes came out later, I was surprised to see there was an extra one. The chef had gone to cook some lobster in Singapore chili crab sauce, just for me. They comped that plus one of the other dishes. What was also impressive was that the wait staff remembered my preferences from the night before. I ordered some cut chili padi the last time, and this time round when setting the table a plate silently appeared. 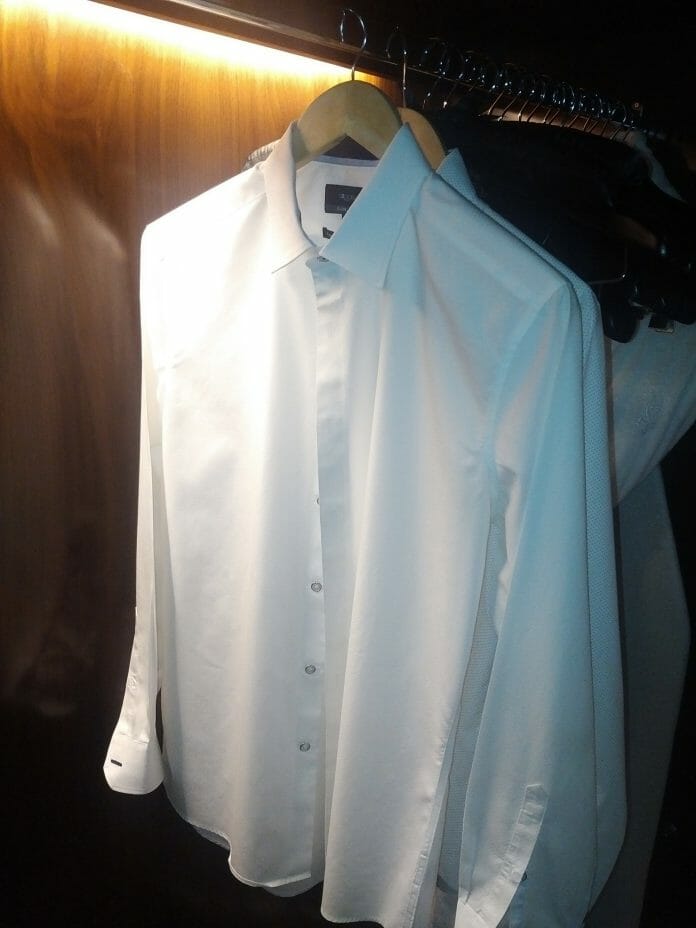 As a club room guest, I was entitled to free pressing for two garments each day. I dutifully sent off some shirts in the morning to get a proper ironing (you won’t believe how bad I am with one).

Now, I had not washed these shirts since (stop judging) starting my RTW trip, because I only wore them at meetings in air conditioned offices. Therefore there were some stains on the sleeves. I mean, they weren’t big stains or anything, but definitely there.

But when I got my shirts back, they weren’t just ironed, those stains had been removed. I don’t know if they washed the whole thing or just used a stain remover, but whatever the case I was amazed they were that observant. Some say that the best hotels are the ones that know what you need before you need it. I’d agree with that, but I’d say that most of the time anticipation doesn’t need mind reading, it just needs common sense.

Case in point- our flight to Bangalore landed at 2am and it was past 3 am by the time we reached the hotel. The only thing on my mind was getting into bed.

Sure enough, from the time our car arrived at the Ritz we were greeted by name and whisked up to reception where our keycards and welcome letters were already waiting. A quick swipe of a credit card for incidentals and we were whisked up to our rooms, bags deposited and goodnights wished. The whole process took less than two minutes.

Now I have stayed at so-called luxury hotels where I arrived at a similarly late hour, only to find the staff totally oblivious and take close to 10, 15 minutes to finish check in procedures. I know, it’s only 10 minutes in the grand scheme of things and I certainly don’t approve of DYKWIA moments, but how difficult is it for a hotel to look at its roster and say- ok, these guests haven’t come in yet, it’s late and when they’re here they’ll want to get to bed. Let’s assign rooms now and have everything ready to go. And trust me, at 3am every minute feels like an hour.

Anticipation manifests itself in a whole lot of small ways too- it can be simple things like when I’m in the lounge with a plate of food and heading to a table that doesn’t have cutlery, and finding that as soon as I sit down some cutlery appears without me having to ask for it. Or seeing a guest at the pool selecting a lounger without a towel, and quickly getting one without being asked. These are simple, simple things and don’t need you to be psychic, yet you’d be amazed how many “luxury” hotels don’t train these things into their staff.

Not at the Ritz though. All these things happened, silently, automatically and unintrusively.

Here are some of the other small things that just made me smile.

The towel animal and handwritten note that came with turndown service 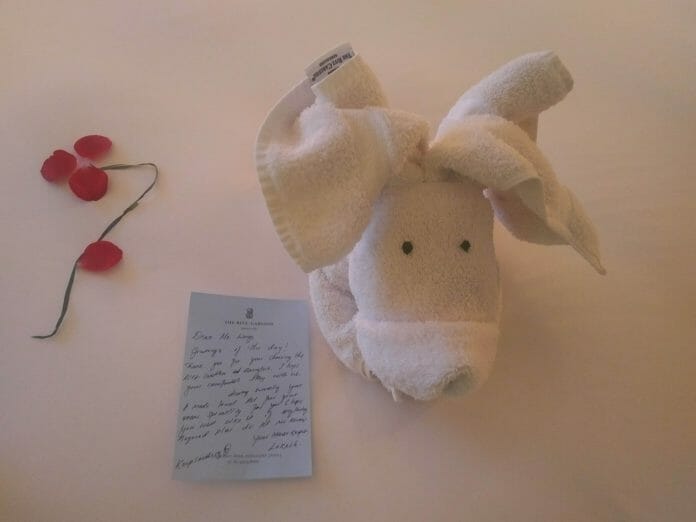 The small token from the lounge staff on my second last day. 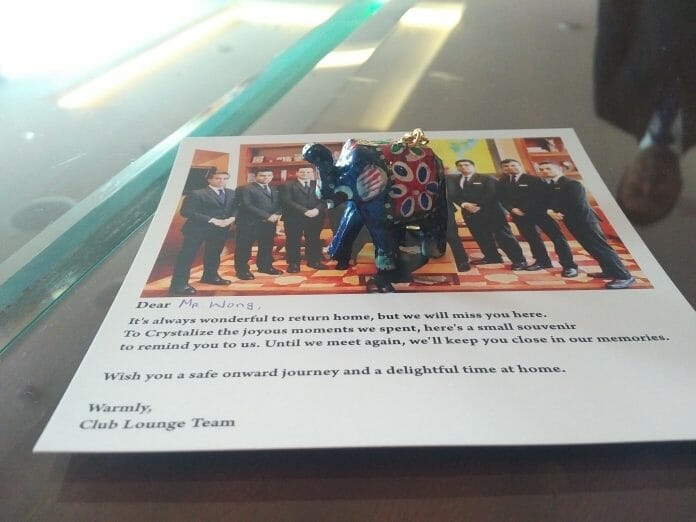 Finally, I left my laptop charger in the club lounge when I checked out to move to a nearby ITC property just so I could clock a few additional Starwood nights (a decision I immediately regretted, from a product quality point of view…but every step towards 50 night requalification is impossible to say no to…). A call to the Ritz and my charger was sent over to me at no cost. I have had more than a few hotels in the past ask me to cover the cost of the taxi for similar incidents (which, fair enough, is my own fault, but still).

So all in all, an amazing stay at a Ritz Carlton property, and hopefully not the last for me.

Aaron Wong
Aaron founded The Milelion to help people travel better for less and impress chiobu. He was 50% successful.
Previous article
Epic Mileslife 4X dining promotion- up to 12 mpd until 9 July
Next article
The Milelion Directory has been updated for June

It’s a brand thingy. Ritz Singapore in my experience is every bit as good as Bangalore. Trying dining there one evening, they will make a fool out of the other Starwood/Marriott service standards.

I had a few meals there + reception in the club lounge. I’m definitely a convert. Even the St Regis wasn’t this attentive

I never saw much point in dining in restaurant inside hotels, they are usually overpriced and disappointing. Is the Ritz Carlton here different?

Just don’t try the one in Budapest! I left Ritz Budapest with a sigh. And with that Ritz worldwide is more than just fantastic and the service worldclass

I stayed at Ritz Millennia recently and was not all that impressed. Service wise was similar to Conrad Centennial but a lot more expensive. Or maybe I was there on a bad day.

SH
Reply to  A

It’s because service in Singapore is generally bad, no matter if you’re staying at a SGD $500 / night property or a $150 / night one.

this, unfortunately, is true. I wouldn’t say that it’s bad throughout, but on the balance i’ve had more bad than good.

“I had not washed these shirts since (stop judging) starting my RTW trip, because I only wore them at meetings in air conditioned offices. Therefore there were some stains on the sleeves.” <– We have all been there 🙂 That's why I never wear white shirts, those stains on the sleeves and on the inside of the collar can be particularly conspicuous…

Was trying to make out the text on The handwritten note but failed. Any better pic?

do they tuck you in at night and let you ride an elephant to the airport?

Stayed at the Ritz Carlton at KL for a few days and the experience was strictly meh. Key cards stopped working, front desk had no clue about the membership changes between SPG, Starwood, etc, Club Lounge was spartan and the toilet faucet kept leaking. If not for the corporate rate, I would have cursed myself for having chosen this property.

i guess the experience will differ everywhere. i know there are some really mediocre ritz carltons in the states. was the service at least ok?