How to play the waiting game.

The Milelion is featured in an ST article today entitled “It pays to time your sign ups“. The article seeks to answer the age-old question- when is the best time to  sign up for a particular card?

And unfortunately, like every age-old question (Can I drive 55? Are we human, or are we dancer? Who let the dogs out?) , it’s difficult to give a definitive answer. Sometimes early adopters have it best, reaping in the initial bonuses and making hay while the sun shines (or rather, until the T&C change). Other times, it may pay to wait until the bank decides to do a mid-cycle product rejuvenation. The problem is, you never know when/if that’s going to happen.

The best I can do therefore is provide some examples of  some of the better sign up offers I’ve seen and instances when acting early was better than acting later, and vice versa. This obviously won’t be a comprehensive list, so feel free to walk down memory lane in the comments and share some other examples of bonuses that are no longer available.

The DBS Altitude card had been around since 2007, and had actually gone through something of a devaluation since then. The 1.6 mpd rate was reduced to 1.2 and the limo benefit quietly disappeared too.  But some time between 2014 and 2015 DBS decided to really push applications on the card.

The first thing they did was add a bonus category of 3 mpd on online hotel/flight bookings. But there were also two great bonuses that I recall. The first was the DBS Altitude Visa’s incredible sign up offer where you got 12,000 miles for spending a mere $800 within 1 month of approval. What’s better is that you could take advantage of this even if you were an existing DBS cardholder.

The second was the DBS Altitude AMEX offering a 50% bonus on all miles earned within the first 6 months of approval, without cap. That meant earning 1.8/3/4.5 mpd on local/overseas/online hotel and flight bookings. Without cap. 1.8 mpd on local spending was pretty much unheard of, and you can bet I put every single dollar of spend I could on this card during the period

The rejuvenation seems to be over as recent bonuses have been comparatively lackluster. The most recent one (which ended June 2017) differentiated between new and existing DBS cardholders. The spending requirement is the same for both ($1,000 each month for 2 months after getting the card) but existing cardholders only get 7,000 miles whereas new cardholders get 10,000 miles after meeting the spend. So in other words, you need to spend more now, and you get fewer miles.

The Krisflyer Ascend card used to be a fantastic deal when it first launched in 2013. I went so far as to call it “The Best Card You’ll Never Use” (some people took objection to that because there was a decent sign up bonus at the time, and that’s fair enough. But I was plenty happy to sockdrawer it). Although the miles earning rates were miserable, they did have good free gifts. When you signed up, you got a voucher for a free night at any property in the Millennium Hotels chain, four lounge passes plus 5,000 bonus miles when you made your first spend of any amount. Best of all, they waived the first year annual fee.

So what I’d advise people to do was get the card, swipe a nominal amount, enjoy the lounge and hotel vouchers and cancel the card when the fee came due in the 2nd year. When I travelled with my friend to London, we each got one card and saved two nights on accommodation in one of the most expensive cities in the world.

But then they tightened the gifts sometime in 2016. First, they added minimum 2 or 3 night stay requirements at certain properties before you could use the free night voucher (including a 2 night minimum for the 2 millennium hotels in Singapore, I presume to deter people who got the card just for a free staycation). Second, they increased the annual fee to a hefty $337 (from $256) AND removed the first year fee waiver. Suffice to say, it’s a good idea to keep a wide berth now.

2012-2017: The Long Unwinding road for the ANZ Travel Visa Signature 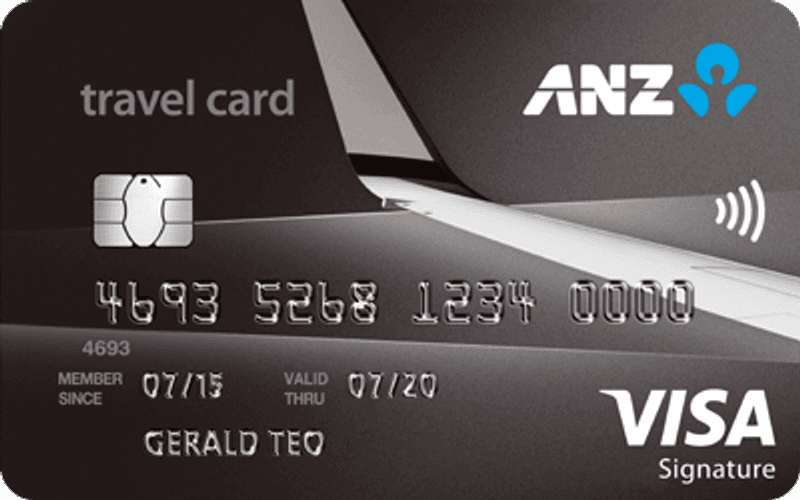 Here’s an example when acting sooner was better than acting later.

Remember this guy? When it launched in July 2012 it was incredible.  1.4/2.8 mpd on local/overseas spend meant it was the market-leading card for miles earning. You also had unlimited airport lounge access, 12,000 miles for paying the annual fee and airport transfer with $1,500 of spending.

The fortunes of this card, however, mirrored the fortunes of ANZ in Singapore. As ANZ started declining, benefits started being parred back or taken away.

First, the 2.8 mpd on overseas spend was restricted to only Australia+ NZ. Then, the minimum spend for airport transfer went up from $1.5K to $2.5K to asking you to use your own Travel$ to redeem a limo then disappeared. The unlimited complimentary lounge access was replaced by a system requiring you to spend an astounding $10K per quarter to get 2 measly lounge passes. The renewal miles went from 12,000 to 10,000 to nothing.

It’s perhaps an act of mercy that ANZ is now gone and Travel cardholders will soon be receiving the much superior DBS Altitude. But if you ever want to do a case study of a product not aging gracefully, you need look no further than this guy. Those who got in early on the product enjoyed what was at the time one of the best travel cards on the market. But you know what they say about good things…

The Premiermiles card is no stranger to the market here, having launched about 10 years ago in 2007. But it was only from May 2016 that they started the awesome (and still ongoing) sign up bonus that let you earn 42,000 miles with a S$10,000 spend in the first 3 months plus paying the annual fee.

$10,000 is no doubt a high mark to hit, but payments to Cardup and iPayMy do qualify in your spend (no matter what some ill-informed CSOs might tell you) so there are ways to hit that threshold if you plan your spending carefully.

That’s not to say that existing cardholders have lost out either- those of you who own the Citibank Premiermiles Visa have a tremendous promotion to take advantage of now too, with the opportunity to buy miles at less than 1 cent each. This promotion is only open to those who have had the card for at least 6 months.

I’m sure there are many other examples of how acting early is better than acting later (and vice versa). The HSBC Visa Infinite was a much better proposition a few years ago, as it’s since seen a devaluation of benefits and a hiking of its annual fee. But the Citibank Premiermiles is arguably a better card to get in on now, thanks to the generous sign up bonus. And how do you account for random targeted sign up promos like this that pop up now and then without rhyme and reason?

Short answer: you can’t. And that’s the moral of the story- it’s pointless to fret about whether a better offer may come around in 6 months, or a year, or (in the case of the Premiermiles) 10 years down the road. All you can do is look at the current offer and decide whether or not it works for you. If it does, sign up with no regrets. If not, wait a while and see what happens.

Feel free to share other great sign up bonuses you’ve seen or times you wish you’d waited. Would love to learn more and discuss them.

I’m personally waiting for mid-August before I dive on that UOB PRVI miles offer. National Day can’t end any sooner!

my personal view is that, when you’re not using a card at all, just cancel it.

this is because it allows the clock to run for not being a customer. this way, when a new sign up offer comes, at least you’re closer to the offer than not.

if a good offer comes for existing customer per say, you could always just sign up for the card again – they arrive within a week these days.

say what you want about the anz travel card but it is still the best card for general spend as compared to the prvi miles and SCB vi. it will be missed

Its overseas mpd leaves much to be desired though

Hi Aaron,
Considering that i gets harder to clock 4mpd on all expenses, the sign-up approach is a good idea… just read the T&C’s carefully and pay your bill timely !
Cancel your cards after the promotion so that the year after, you can apply again 😉
Btw, there is a nice sign-up offer for the Ascend: 5,000 miles + 15,0000 miles (with 6 ksgd spent over 3 months) + 1,500 miles for each supplementary card !!!!

thanks for the heads up on the signup offer. will take a look and write something about it!

Citi PremierMiles Card
Get up to 37,300 miles with $9K spend in the first 3 months

AMEX KrisFlyer Credit Card
Get up to 23,500 miles with $5K spend in the first 6 months
See All Offers
Offers may only apply to new-to-bank customers. Read T&Cs for full details.

Hosted a webinar with @ywlcsg last week on the fun

Did you remember it's The Milelion's 5th birthday

There'll be another time.