I wrote about Grab’s loyalty program, GrabRewards, when it launched earlier this year. A few days ago, Grab expanded its rewards program, adding 150 new merchants to its ecosystem. 150 sounds like a lot, but that includes merchants across the whole of SEA. If you’re in Singapore, the selection is limited to just under 20 merchants What’s new with Grab Rewards? We’ll start with the good, then move to the very bad.

The old earning scheme featured a spend $1 get 1 point system, with a differentiated bonus structure for GrabCar/Taxi and GrabShare/JustGrab, which looked like this:

This has now been replaced with a new standard structure for all Grab rides (except Hitch and Shuttle, which appear to not earn points at all). Gone is the X30 points for JustGrab and GrabShare, and X16 is the maximum bonus now.

Depending on whether you use cash or GrabPay, $1 now earns you 8 or 16 points. Here’s the current redemption structure by tier:

Given this structure, your effective rebate is

This rebate structure seems largely unchanged from what it was the last time I wrote about GrabRewards. The main change is that the X30 points with JustGrab and GrabShare is gone (but I don’t want to pin this to the new GrabRewards program per se, because this change has been around since 1 July and GrabRewards just got expanded this week)

GrabRewards is obviously structured to encourage people to use GrabPay (basically, your credit card), which you should using anyway in order to maximise your miles (DBS Woman’s World Card- 4 mpd).

A 3.5-4.5% base rebate isn’t anything to get too excited about, although it’s certainly better than nothing. As I said before, I don’t think anything beyond a 5% rebate is sustainable in the long term. Also, I suspect Grab will offer promotional points earning on particular types of vehicles from time to time in order to steer demand.

So the good news is- if you liked using your Grab points for Grab vouchers, you’ll enjoy pretty much the same value as you did before.

In addition to redeeming Grab vouchers, you can now use your points to redeem rewards from an expanded portfolio of partners. This sounds great in theory, because like airline miles, your points become more valuable the more options you have to redeem them for.

The problem is, the partner rewards are terrible.  I’ll explain why, but first here’s the full list of awards you can redeem in Singapore, taken from Grab’s press release. I’ve put in red the number of points each reward requires:

My biggest gripe with a lot of the rewards on offer is they are the classic example of “give with one hand”.

Here’s that list of rewards again, with the full T&C listed for each

I’ve color coded them according to how good/bad a deal I think each reward is.

The good/ not so bad

Green refers to rewards that, well, ok I guess are rewards in the sense that it’s trading you one form of currency (Grab points) for another (voucher to use at merchant).

You’re trading one form of value for another- maybe you have no use for free Grab rides as your company pays for them, but you have use for a $50 Gnome and Bow voucher. 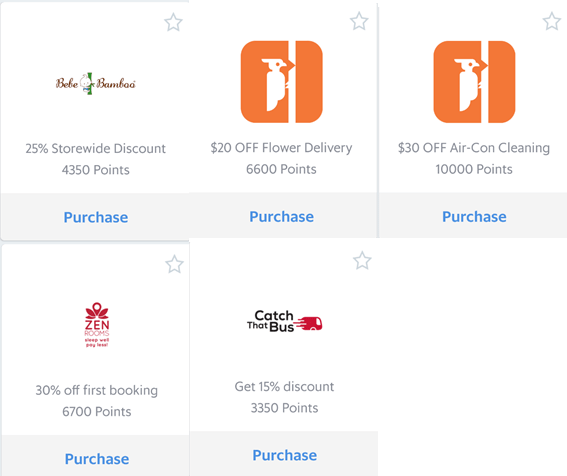 Light red are rewards that I’d probably avoid, but confuse me more than anything from a marketing POV. If I don’t already use CatchMyBus or Bebe Bamboo or Knock Knock, then those merchants should be giving me discount vouchers for free to encourage me to shop with them. The expectation should not be that I’ll spend my points to get a discount voucher at a merchant I would not have otherwise used. I’ve never seen Uber charge anyone for a $10 off first ride voucher, for example. That just doesn’t compute. 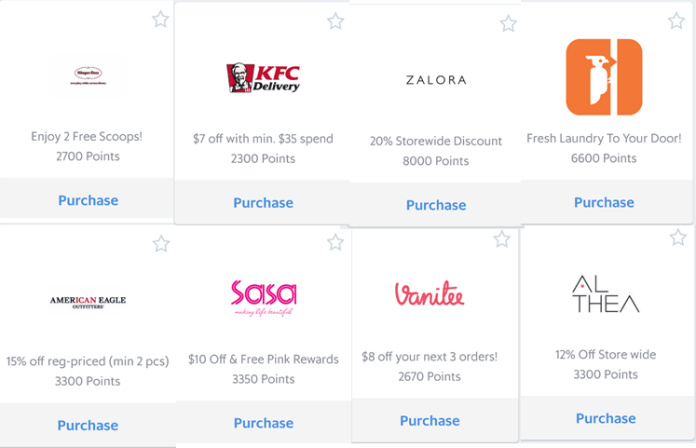 The dark red colored ones are where things start to get ugly and my blood starts to boil, because of the additional T&C imposed on the so-called “rewards”. These are not rewards. These are marketing initiatives disguised as rewards.

I generally dislike vouchers with minimum spend requirements as they come off as half-hearted, but I have no problem with someone on the street passing me a $X off Restaurant Y coupon with a min spend of $Z because I don’t have to pay for that privilege.

I do have an issue with being expected to pay to cover the cost of a company’s marketing. Because that’s what this is. With this scheme, the cost of marketing (that should be borne by third party merchants as customer acquisition costs) are being borne by you, the customer.

Put it this way. Instead of paying 2,300 points for a $7 off KFC Delivery voucher that has a minimum spend of $35, why don’t I just redeem a $5 Grab voucher and use the money saved to buy KFC with no minimum spend?

Many partner rewards feel like the type of voucher that should be given away for free, not paid for

What annoys me even more is that Grab’s partner rewards are, at the end of the day, a marketing program. Third party merchants work with Grab to get listed in the hope of driving more business. And there’s nothing wrong with that at all- it’s just cynical to expect the customer to pay for it.

You can see it clearly- Haagen Dazs has a new froyo product and they’re trying to drive demand by giving people a “free” taste, so they give 2 scoops free but 1 has to be froyo. Star360 is having problems moving some inventory, so it offers 15% off but excludes popular items like adidas and Nike from the discount. KFC wants people to order more KFC, so they give you $7 off…but want you to spend $35.

So why isn’t Haagen Dazs giving away free buy 1 scoop get 1 scoop of froyo free vouchers outside its outlets? Why isn’t Star360 giving out coupons for 15% off (with excluded categories)? Why isn’t KFC putting $7 off $35 vouchers in the newspapers?

I especially want to call out Zalora for their ridiculously high minimum spend requirement. Let me spell it out for you: I need to pay 8,000 points for a 20% off voucher that requires me to spend a minimum of $120 (plus, the voucher doesn’t apply to a very extensive list of excluded brands). Are you even serious? That’s about $20 worth of Grab Rides I’m giving up, in exchange for a coupon that I’d normally expect to get for free in my email.

Likewise dishonorable mention goes for Althea. There is something fundamentally wrong about having to pay 3,300 points to get a 12% discount voucher which requires me to make a minimum spend of $50 and caps my discount at $10. That’s the kind of voucher someone should be distributing for free on Orchard Road, not expecting points for.

I don’t know if this is the fault of the third party merchants or Grab, but my conclusion is the same. With the current partner rewards in place, being asked to redeem your points for anything else (maybe not the $10 Deliveroo or 1 month Spotify voucher if you really use those) is an insult to your intelligence.

What should Grab have done? Make the “rewards that aren’t quite rewards” free for Grab customers. Or fine, make them something that gets unlocked after taking a certain number of rides in a month. At least that way you drive a bit more business for yourself by creating incentives for people to keep using Grab. But don’t ask people to pay for them. That’s just wrong. Customer acquisition is a cost that should be borne by companies, not customers.

I’ve reached out to Grab PR for a comment on these thoughts, and will let you know when they reply.

Aaron Wong
Aaron founded The Milelion to help people travel better for less and impress chiobu. He was 50% successful.
Previous articleReview: Vistara A320 Business Class Bangalore to Delhi
Next articleSo I’m about to do something a little crazy in Tokyo…

For the zalora offer, can get the same deal via citibank cc 😉

see, i didn’t even know that. and that just makes things worse.

And you have grab as an ad on your site tsktsk

I am pretty sure there will be UOB Krisflyer ads too

UOB CCs as well. those deals are as good as the Wink or Perx “rewards”

Another restriction is that a voucher can’t be used while using a promo code. Given that their business model at the moment seems to bank on driving demand through frequent promos, I’ve barely been able to use any of my rewards points.

The differentiation for platinum customers is also minor (who uses the hotline honestly), though it’s hard to tell how valuable the priority queue is as it’s difficult to control for. From a few trials with my partner, I sometimes get a car faster and other times not at all.

if you really cared about your customers, you’d honestly tell them which offers are of best value.

” Customer acquisition is a cost that should be borne by companies, not customers.”
So very true!

Just as you broke down the cost per unit for all the offers, I think the same should be done in other lines of business such as the supermarket, on the price labels, so people know which value pack actually really provides a real cost per unit saving.

Why Grab Is King, And How To Get Free Rides – Investment Hero

[…] Grab recently rolled out its loyalty rewards program. There have been mixed reviews about it (see here, here and here), and I wouldn’t want to be adding to the plethora of reviews already existing […]

Dear Grab, there seems to be an error in your app - The MileLion

[…] see, when you relaunched GrabRewards in August 2017, it seemed like you guys had no idea what a rewards program was supposed to look like. 8,000 points for a 20% off Zalora voucher with a minimum spend of $120 plus a long exclusion list? […]