Potentially great value for those flying domestic in the USA.

Singapore Airlines and Alaska Air announced a partnership recently that allows for codeshares, reciprocal mileage accrual and redemptions. Alaska’s Mileageplan is one of the most useful award programs out there, and the ability to earn Mileageplan miles via SQ flights is something I’m really looking forward to. Krisflyer has just released its award chart for redeeming Krisflyer miles on Alaska operated flights, and although Alaska doesn’t fly outside of North and Central America (US, Canada, Mexico, Costa Rica, Cuba), this still has the potential to be useful for Singaporeans who want to hop around the States/Canada on vacation.

The Alaska award chart divides the US into 5 Zones, with Canada in Zone 2, and Costa Rica, Cuba and Mexico in Zone 3. For comparison’s sake, the current Krisflyer Star Alliance partner chart splits the US into two zones

The cost of a one-way economy domestic US flight (ex-Hawaii) with the Star Alliance chart is 12,500 miles, regardless of actual distance. Domestic one-way economy awards with Alaska start at 7,500 miles and max out at 12,000 miles. (I certainly wouldn’t use the Alaska chart for First Class tickets- those prices are just crazy)

Suppose I’m touring the West Coast and want to go from Los Angeles to Seattle. It’s certainly a lot cheaper to fly with Alaska for 7,500 miles than with the Star Alliance chart at 12,500 miles. Or suppose I want to get to Canada- that’s the same 7,500 miles to both of Alaska’s Canadian destinations (Calgary and Vancouver)

It gets even better when you consider Hawaii. I get that a lot of Singaporeans might not do both Hawaii and mainland USA in a single trip, but if you are then it’s a mere 11.5-12.5K miles to fly from the mainland to Hawaii, versus 17.5K miles if you were to use the Star Alliance chart.

This chart is probably the most useful to me if I want to do short hops in the States on the West Coast. If I were doing West Coast to East Coast, I’d much rather go for the better connectivity of United for 12.5K miles than have to figure out something with Alaska for 12K. Also, Alaska’s destination list is nowhere as extensive as United’s.

The award chart will get a lot more interesting when the acquisition of Virgin America is completed and those flights start operating under the Alaska brand. Alaska is a lot stronger on the west coast (despite the name, they’re based in Seattle) and the idea behind buying Virgin America was to gain a foothold on the east coast. 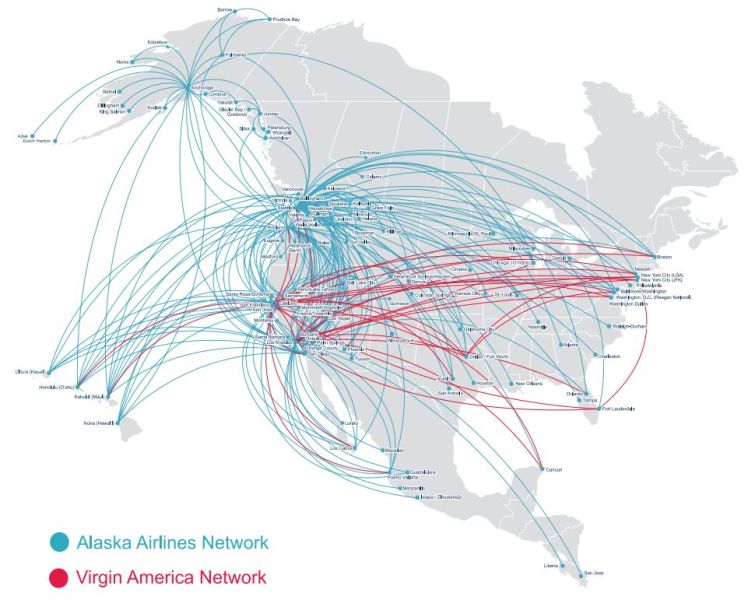 One last point- the fine print on the award chart says that “transfers are not permitted” but as Gary at View from the Wing points out, this is probably an error on SQ’s part given that the award chart also talks about mixed class bookings (he’s called up Alaska to confirm that transfers are possible, although I would have thought it’d make more sense to call Krisflyer)

Domestic air travel in the US has gone the way of the Greyhound bus, and even domestic first class is absolutely nothing to get excited about. But with these low award prices, it does make sense to see if award space is available before booking an expensive last minute ticket.

Aaron Wong
Aaron founded The Milelion to help people travel better for less and impress chiobu. He was 50% successful.
Previous articleNo, I don’t think SQ’s new A380 Suites design just got leaked
Next articleUnlimited inflight WiFi for less than S$17 a month sounds too good to be true

You can’t use the KF miles to fly CX even though SQ and AS have reciprocal miles earning. However if you’re referring to accrual SQ miles on AS’s MP and using AS miles for SQ metal, SQ dont release award space for most of their long haul routes

I meant accruing SQ butt-in-seat miles with AS and using those those to fly CX — effectively flying SQ to redeem on CX. JL too, come to think of it

Can’t wait to see reciprocating miles on AS for SQ. If it’s anything as generous as JL and CX, we will be in for a treat. SIN-PER in J for sgd1000, dream come true

Anyone has problem signing up for a Mileage Plan acct? I tried repeatedly. There seems to be an error but it is not highlighted in red as promoted on the website

what kind of error are you getting? i assume you’ve tried diff browsers already?

Thx for the reminder ML! Looking forward to the revamped site!