No, I don’t think SQ’s new A380 Suites design just got leaked

There’s quite a bit of buzz on the internets right now about the possibility that a design firm just leaked one of the most anticipated aviation product launches in recent memory.

As per SQTalk (post #53), if you navigate to the website of aircraft interior designers Pierre Jean Design and click on “Commercial Aircraft”, you’ll see a portfolio of work the company has done for clients including SQ. The story goes that this could be the leaked design for SQ’s much anticipated new A380 suites, which will be officially announced on 2 November. 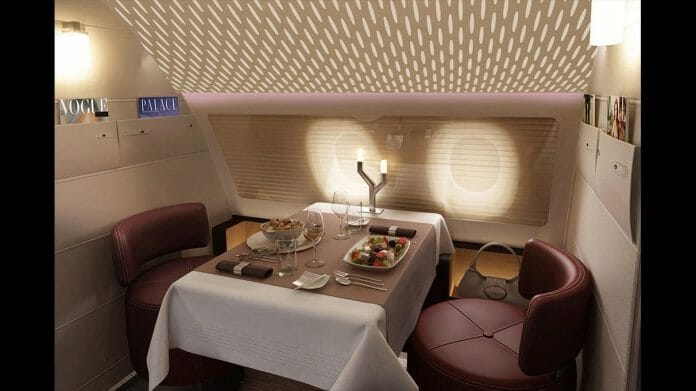 I disagree. I think these photos are much more likely to be rejected concept designs that the firm has decided to release, ala these old DCA concepts that came out around the end of 2015. Here’s why:

The age of the photos

The photos themselves aren’t very recent. When you download the images and check their properties, you see that they were all taken back in February this year, when SQ was still deciding on designs.

Indeed, a quick Google search suggests that the webpage the purported SQ designs appear on was first published back on Feb 20, 2017. It’s just that someone has stumbled upon it now (here’s how I derived the date). These two dates tie in well with each other- someone at the design firm created the images on 16 Feb and the page went up 4 days later.

Other props in the photos give clues to the age of these mock ups. See those magazines poking out from behind the seat on the left?

If we zoom in, we can clearly see that this is a Vogue magazine cover.

I went to do a reverse image search and found that this cover is from all the way back in 1994, when Vogue first launched in Singapore. The cover model is Jenny Shimizu (Angelina Jolie’s ex, apparently) and this was taken from the October 1994 issue. 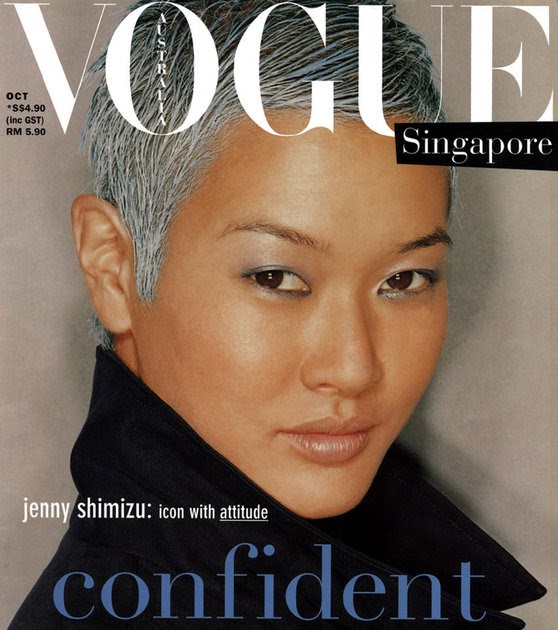 Vogue is no longer published in Singapore anyway, so there’s no question of them using a “newer” issue of Vogue, but I’d give these photos more credibility if they happened to use recent magazine covers (I realise this is inconclusive as it’s trying to disprove a negative – if they had August 2017 magazine covers then we’d know for sure the photos are recent, but the lack of a recent magazine cover doesn’t necessarily prove the photos are old…they could well have shot it yesterday and pulled out some old magazines as props. However, I’d refer you to the Google search and image properties to counter that)

Leaving all that aside, there are still technical reasons for why I feel these are no more than concept pictures.

Take a look at the photo below. It looks really elegant, but on closer inspection you see numerous design issues.

Leaving aside the obvious omission of seatbelts on the red chairs there’s the issue of having books just strewn around on shelves. During turbulence, every object that’s not properly secured can become a dangerous projectile, so I think these photos are more for aesthetic feel than actual implementable designs.

I’m sure accidents do happen, but I’d be hard pressed to believe that if your firm has won a highly prestigious tender with SQ that has strict confidentiality clauses you’d make a goof like this. Or that the goof would stay on the website for so long (remember- this page has been up since Feburary!)

Moreover, we don’t even know for sure that Pierre Jean Design won the tender to design SQ’s new A380 cabin products. We can surmise from this article that they were invited to pitch back in early 2015 (when planning for the next gen A380 products was underway), but that’s it. That lends more credence to the idea that this was one of the designs that they pitched to SQ which was ultimately rejected, hence them deciding to release the images as part of their portfolio.

I get that there’s some crazy level of anticipation for SQ’s new Suites product, but if there’s one thing SQ does better than anyone else it’s play their cards close to their chest.

I’ve already booked myself a March ticket in Suites on SQ221, by which time I hope the new product will be flying the SYD route. In the meantime, here’s looking forward to 2 November!

I’d agree this is unlikely to be the final new product. SQ would’ve thrown a legal fit by now if ever this happened, and the design firm would lose business.

yeah i mean it’s not just that, it’s the fact that this seems to have been around for a long time already and it just so happens that someone recently stumbled upon it.

Quite right. Fanciful concept designs for aircraft cabins are just like the most out-there concept cars dreamt up for motor shows. That’s all these are.

What I know is for meetings involving new product designs all meeting participants have to surrender their mobile phones before the meetings. It is to that extent SQ play their card close to their chest

time for someone to go look for sq product staff on tinder. go on, take one for the team.

So many sharp edges…please lah.

the design looks so out dated and ugly