First Class ain't what it used to be.

For the uninitiated, first class on domestic US flights isn’t quite what you think. There is no nice lounge to luxuriate in before takeoff, no champagne, no multi course meals, no lie flat beds, no amenities kits, no branded PJs. In terms of hard product, think of business class on Silkair’s A320 aircraft. Narrow body, recliner seats, decent-ish legroom but certainly not worth documenting. Domestic air travel in the States has gone the way of the Greyhound. And by Greyhound I mean the bus. Price competition has forced airlines to cut any semblance of frills, and as it is you’re lucky to get overhead bin space at the rate people are trying to cram in carry-ons to avoid bag fees.

I had a total of 3 domestic First Class flights on the US leg of my RTW trip, from LAX-DEN-CLT-BOS. They’re pretty similar so there’s really no point writing 3 separate trip reports, but given the rate at which US airlines are aggressively monetizing first class it might be helpful to give you an overview of the experience so you can decide whether you’re willing to pay for an upgrade.

A lot of US airlines have moved towards entirely automated check-in, with the kiosk printing both your boarding pass and bag tag. They still have one person at the bag drop area to make sure your bags are properly tagged, but that’s about the extent of human interaction you can expect. There’s a bit more of a human touch for first class passengers, although as you can see in the photo below the kiosks are also available if there’s a line and you want to speed things up. 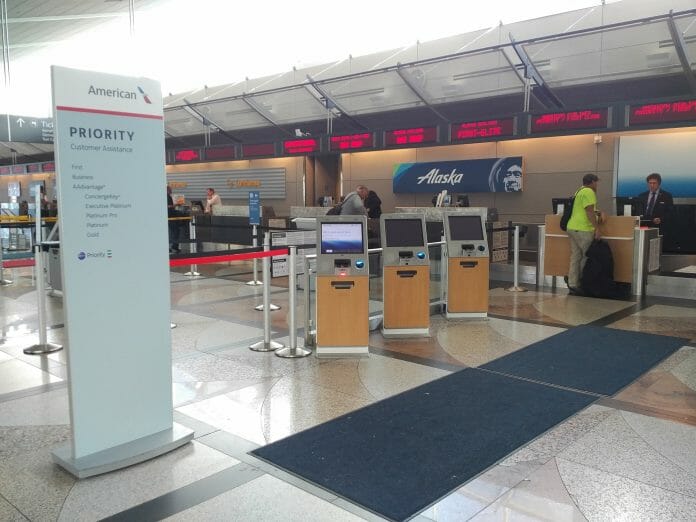 Apart from the shorter queues at check-in, another nice thing about the First Class experience is priority security screening. Depending on what airport you’re flying from this can either be a more pleasant experience to have or the difference between making and missing a flight. You can read about priority access here, and it’s available for a fee to passengers travelling in economy.

As I mentioned, lounge access is not provided for domestic first class passengers, so don’t buy an upgrade expecting to get access. However, if you have Oneworld Emerald or Sapphire issued by anyone other than AA, you’ll be granted lounge access. I didn’t have that, so I can’t report on how the lounges are. That said, you can find plenty of trip reports online.

Where boarding is concerned, American doesn’t nearly fragment its boarding groups as much as United does- there are 9 different boarding groups but only 2 lines. How that works out in practice I don’t know. 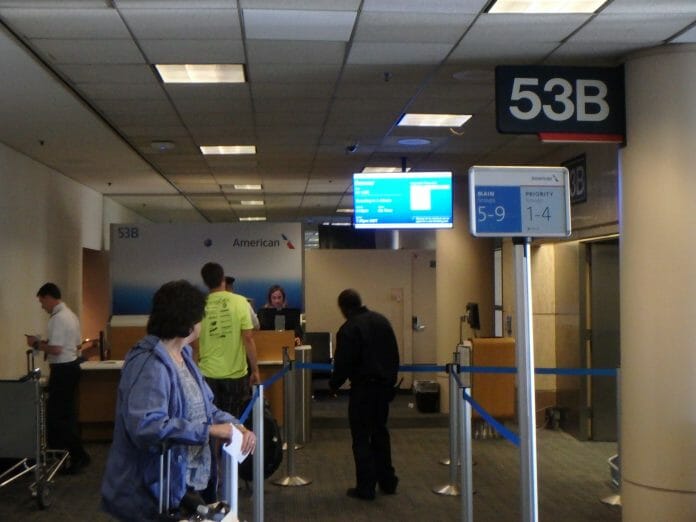 With single-aisled aircraft, you really want to be either the first or last to board. Everyone else is going to get stuck in a traffic jam along the jetway as people pause to put things in the overhead compartments.

I was fortunate enough to have American Airlines’ new first class seat on my LAX-DEN flight. As Ben over on OMAAT points out, this seat is very similar to the premium economy seat that American Airlines is looking to introduce on its long haul fleet. 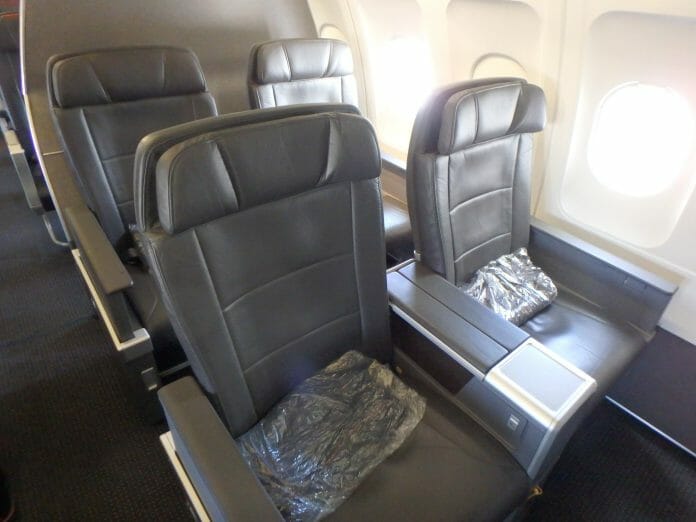 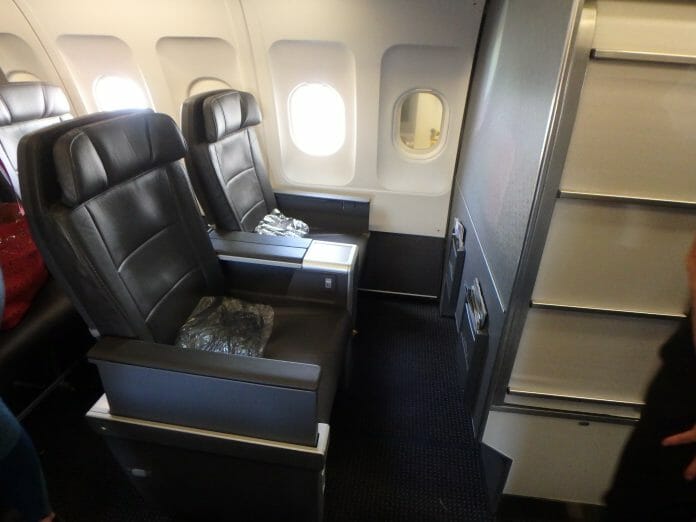 It’s certainly a nicer looking seat than the old gen First Class seats, where the upholstery can be torn in places and seats can make a disconcerting creaking noise.

The newer seats are smartly finished in leather, and depending on your route and time of flight there may or may not be a blanket waiting for you at your seat. 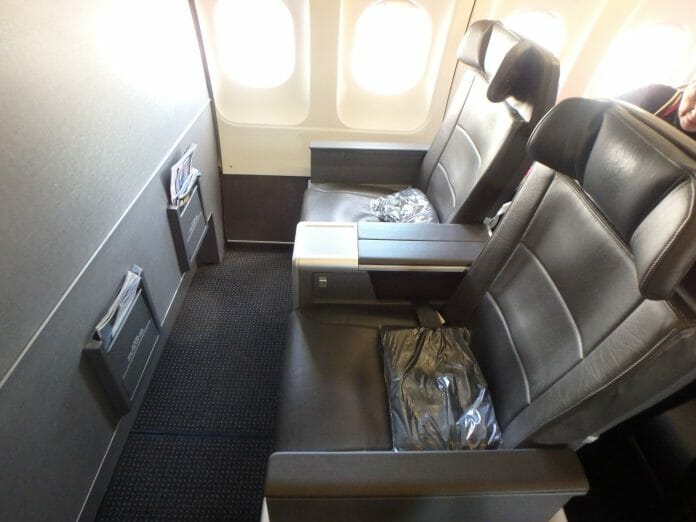 Here’s an idea of seat width. Note the adjustable headrest and storage pocket at the side. 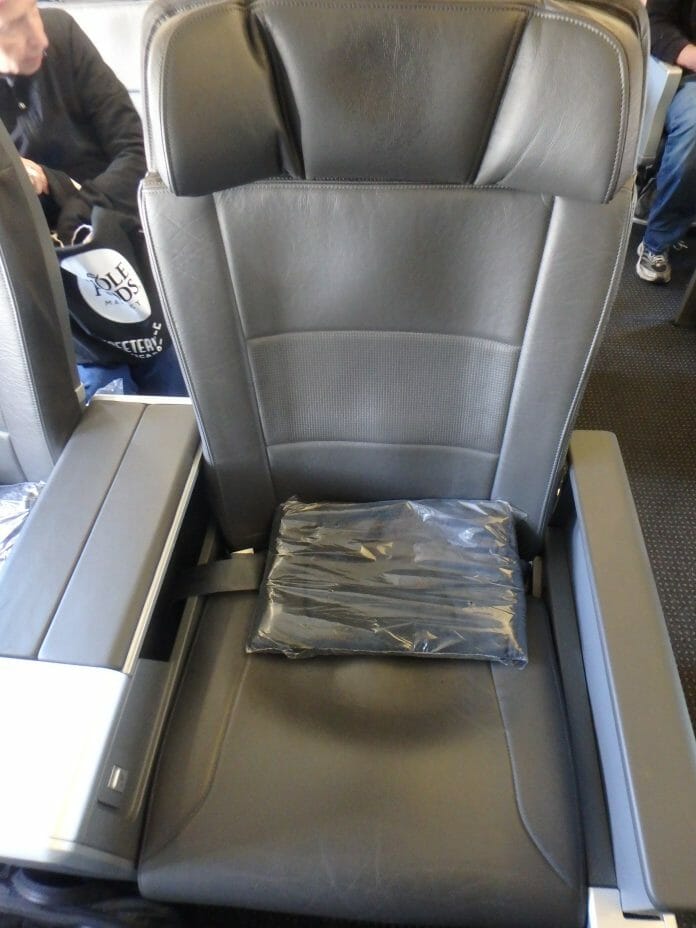 Legroom wise, I had a bulkhead seat which was plenty of room for me. But if you’re stuck in one of the other rows, you’ll have decent space too even if the person in front of you reclines. All seats have in-seat power, but no USB plugs. 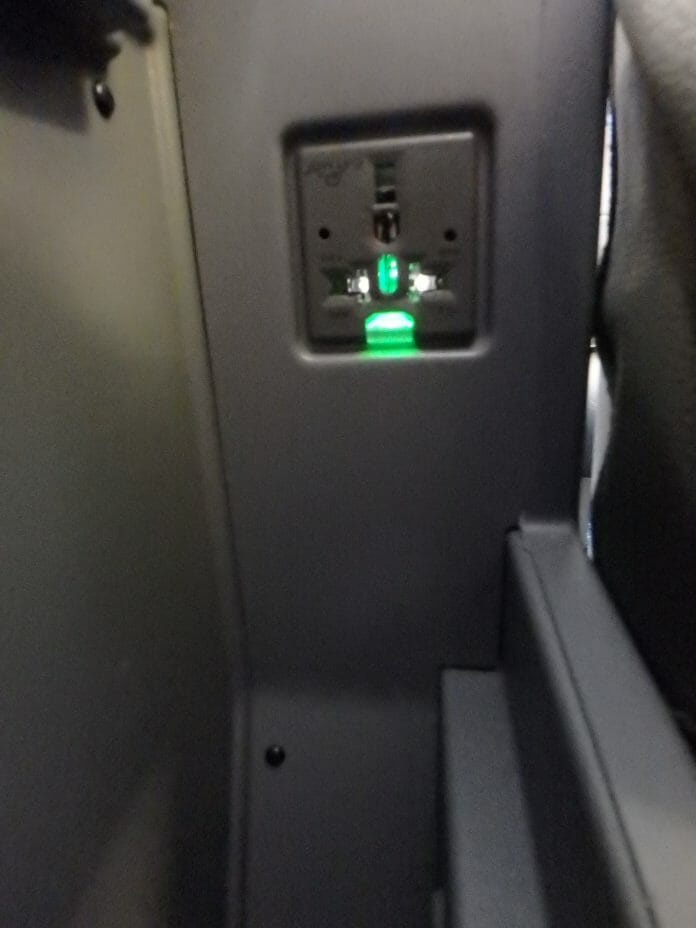 In your other armrest is the tray table. Tray tables will be medium sized- definitely larger than in coach but nowhere as large as an internationally configured first/business class seat. 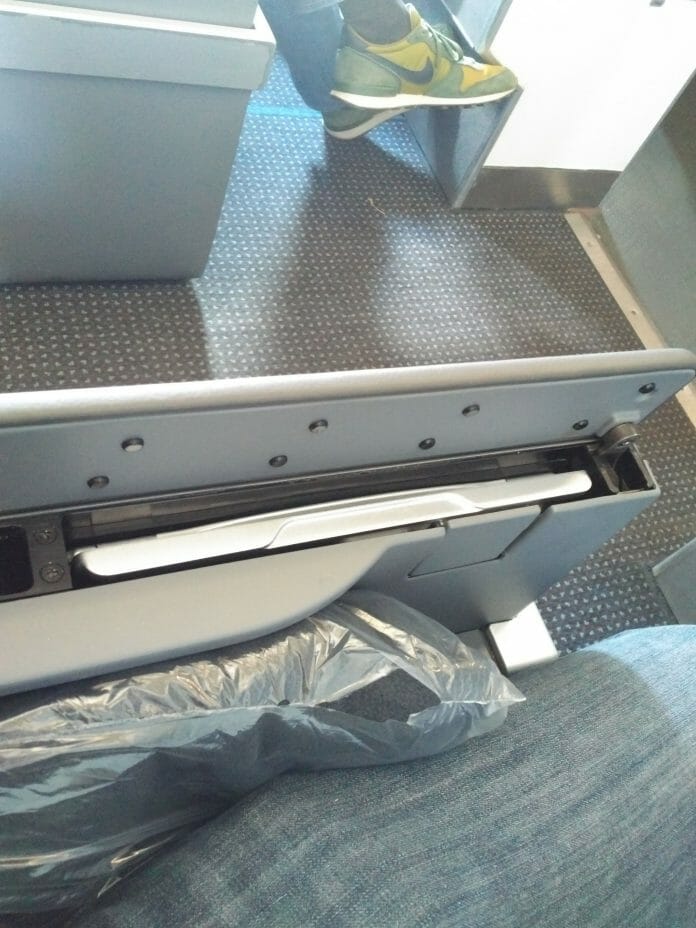 Apart from selected commercially important routes where a small sandwich might be served in economy, First Class is the only place where you’ll get a hot meal served on a domestic US flight.

But before all that, there’s the small issue of the pre-departure beverage (PDB) 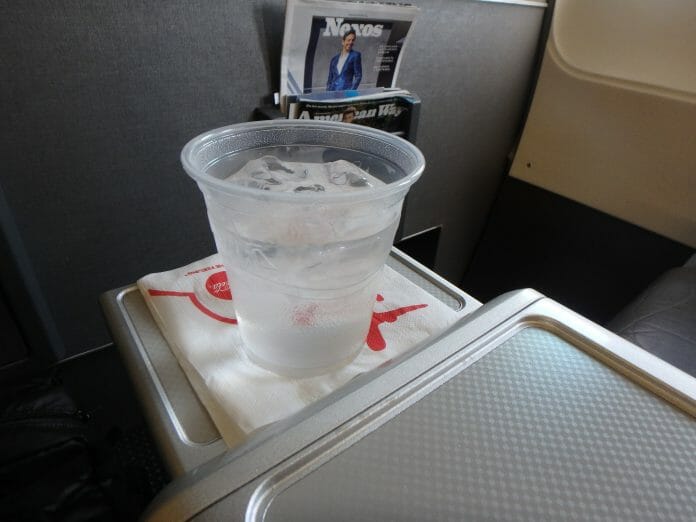 I wrote about this previously in one of my United Airline reviews– it seems silly writing about a plastic cup of water, but the PDB has always been a source of controversy on airlines in the US.

If my understanding is right, how it works in the US is that flight crew aren’t paid until the door to the aircraft closes (some airlines may offer a small fixed amount for their travel to and from the airport). Therefore, some flight crew have taken the attitude that “I’m not paid, so damned if I’m going to offer you any service until we’re in the air”. And therefore there have been reports of some flight crew refusing to do anything more than the perfunctory until they’re on the clock. More than enough has been said about this online so I’ll just say that I enjoyed my glass of iced water immensely.

Just before takeoff, the flight stewardesses fill some ramekins with mixed nuts and put them in the warmer. Once the seatbelt sign goes off, you get served warmed nuts. You won’t get menus on board, so don’t even bother asking. However, AA has a nifty feature that lets you see the menu when you go to the manage my booking section on the webpage. You can even pre-select your item, which should, in theory ensure it doesn’t run out by the time it gets to you. 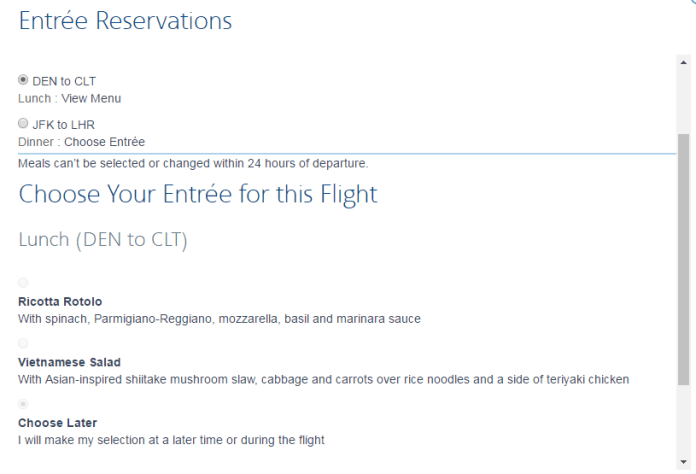 AA’s website talks about partnerships with celebrity chefs,  but I think those might be for international routes.

The dishes I get certainly didn’t live up to the pedigree of the chefs. This is the meal served from LAX to DEN. Chicken is a staple feature of domestic first class and it is almost always dry.  The veggies are boiled to death and devoid of any seasoning, and the rice is mushy. The sourdough bread was probably the highlight. 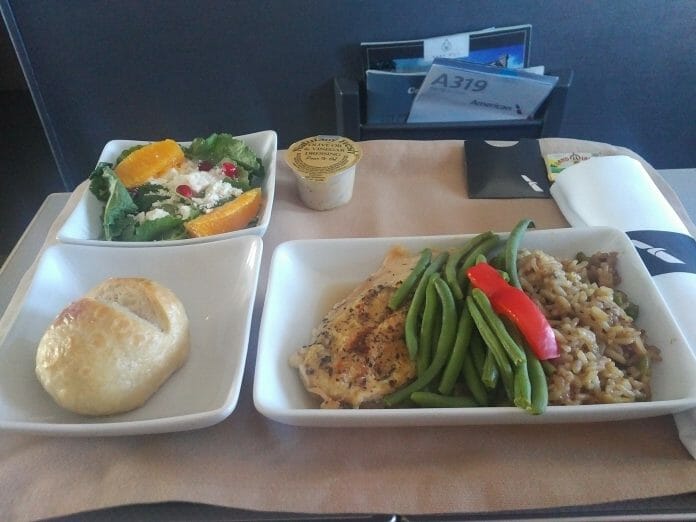 Fortunately the cheesecake desert was much more palatable. 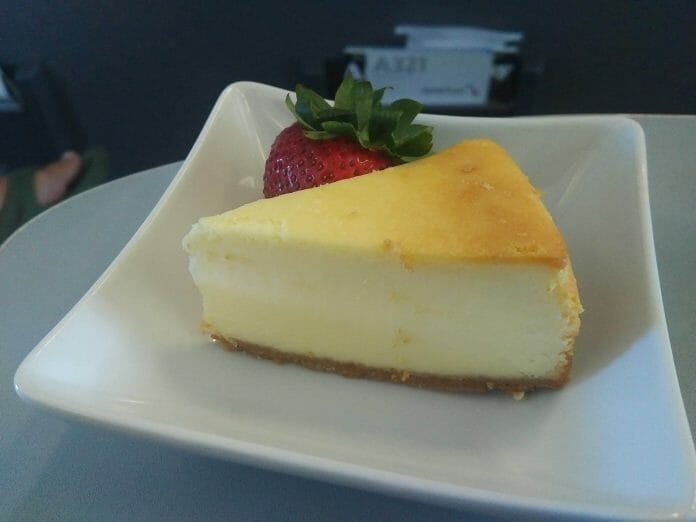 From DEN-CLT I had the Vietnamese salad. The salad and chicken were both served cold. 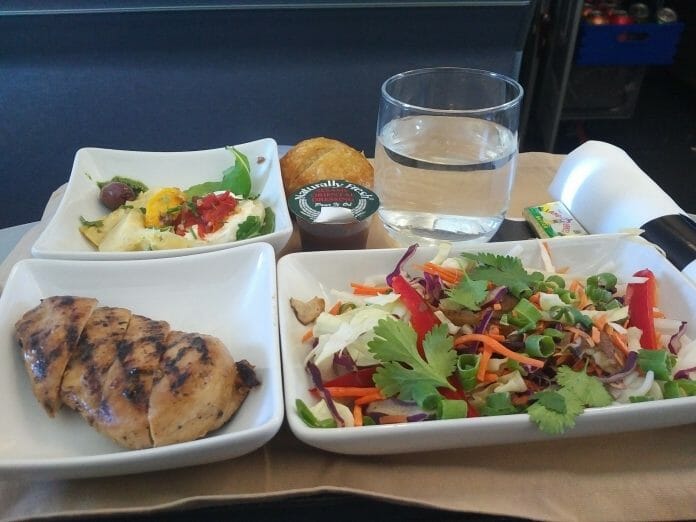 In case you’re wondering, yes, that is chicken on the left. And yes, it is dry. It was so dry I poured a little water on it and was amazed to see the water getting absorbed.

Desert was a freshly baked chocolate chip cookie. Ok, freshly baked isn’t the right word to use but it was warmed up in flight. And the centre was molten and good. 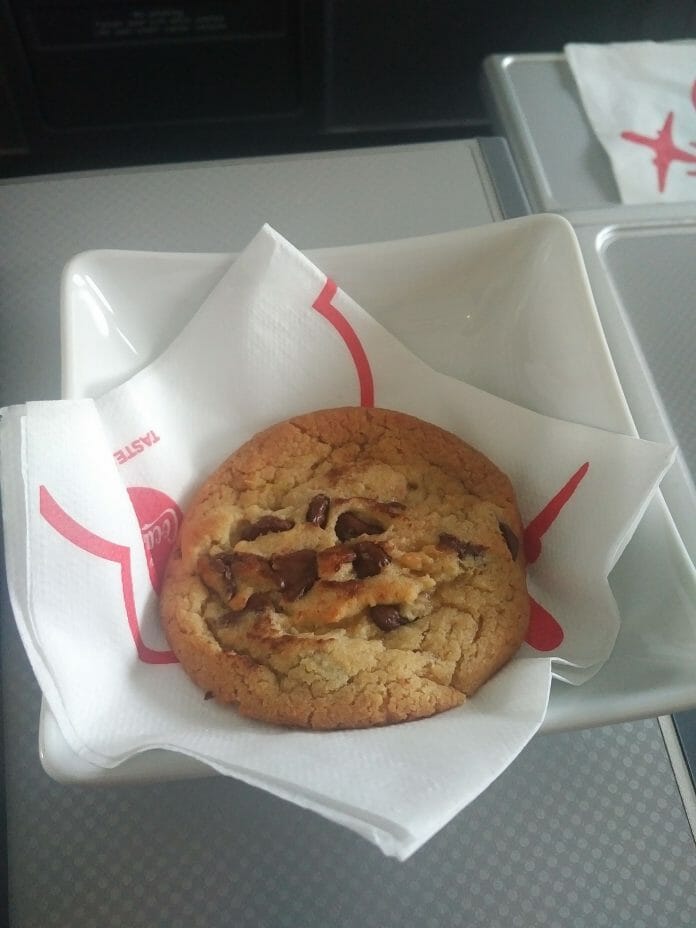 CLT-BOS was a shorter 2 hour flight not during a traditional mealtime window so they offered a snack of cheese and crackers. American Airlines offers WiFi through gogo, although I find pricing to be on the steep side. 30 minutes is too short for most flights, but $16.95 is too much to pay for a flight pass when your flights are about 3-4 hours at most. And I can’t think of why you’d pay $26.95 unless you’re on some crazy multi-city single day itinerary. 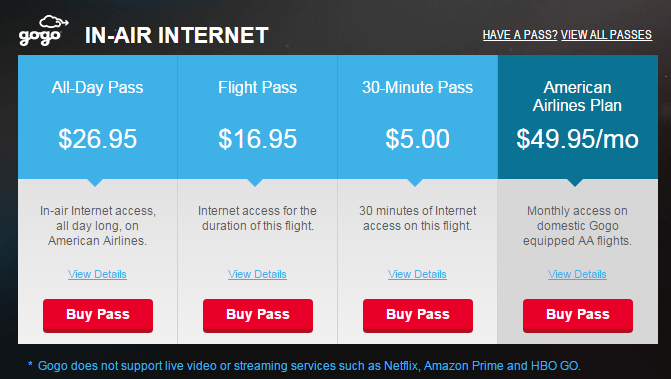 The WiFi itself worked perfectly fine, and supported basic website surfing and web browsing (no video streaming). You can also track the flight’s progress on the WiFi portal’s minimap (no purchase required) 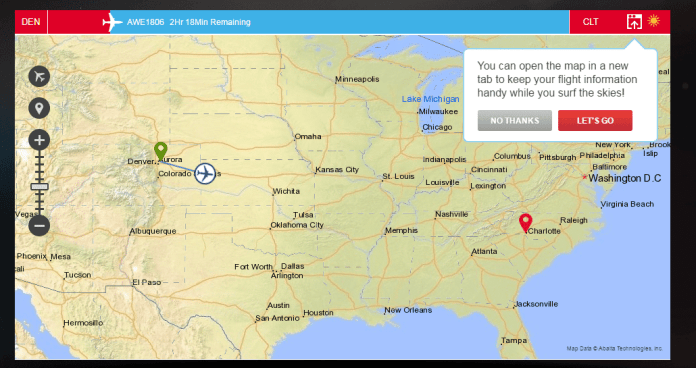 You won’t find seatback TV screens, because those add weight and US airlines are all crazy about saving fuel. What you will get, at least on flights with WiFi, is entertainment streamed for free to your device in all classes.

The selection is really quite decent, with a wide range of recent movies available. 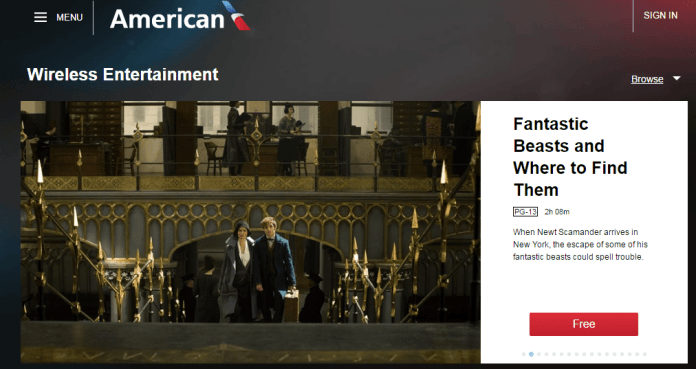 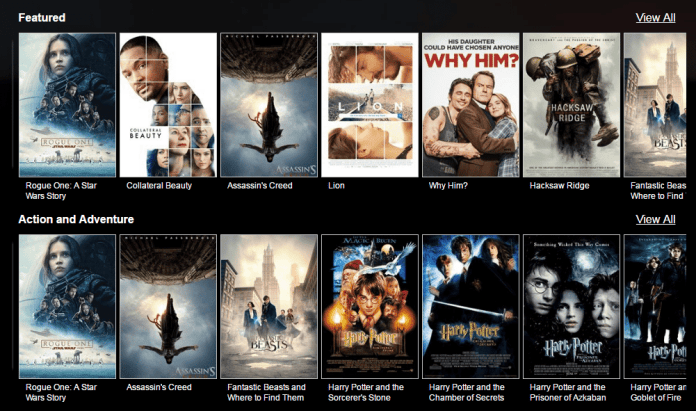 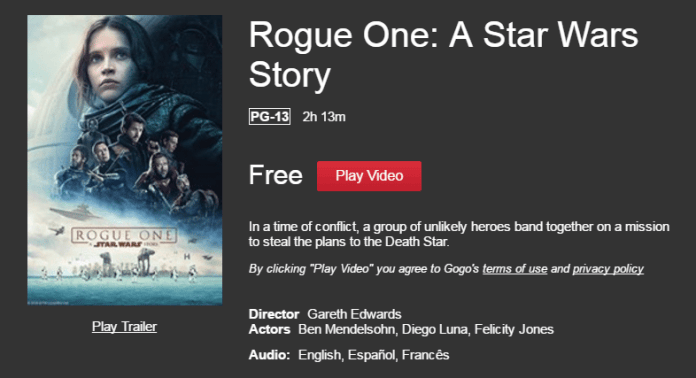 Service? On a US airline? Yes, yes, it’s not a punchline. Service on my flights was perfectly fine. I know there are horror stories of overworked and underpaid flight attendants threatening to sic the cops on anyone who doesn’t comply, but the attendants I had were all friendly enough. You’re not going to be on a first name basis with them by the end of the flight and they’re definitely more homely than professional, but this should really be the least of your concerns.

It’s not aspirational flying by any means, but so long as you go in with the right expectations, you’ll find domestic first class to be a pleasant enough experience. Is it worth upgrading from economy? Definitely not on short flights. Perhaps on a medium-haul red eye, if you’re currently stuck in a middle seat in coach. US airlines have developed sophisticated algorithms that try to encourage people to buy-up to first class, so see if the offer you get is worth how much you value comfort.

Fortunately, my next experience with American Airlines was on their international business class product, and that, as you’ll see soon, was indeed something to write home about…

Just a comment for economy class on your point that “with single-aisled aircraft, you really want to be either the first or last to board”. My experience is that if the flight is full and you’re in the last group to board, it’s likely that overhead luggage bins would already be filled because the airlines charge for checked luggage. Your carry-on will then be gate-checked and you’ll have to wait at the carousel upon arrival. This can be either good (1 fewer bag to handle) or bad (because you waste time at the carousel). It seems that the algorithm allocates… Read more »

Yes, absolutely right. The worst people are those who board and immediately put their bags in the first overhead space they see regardless of where they’re actually seating

It was rather surprising because I never had to gate-check my bags when I was taking budget airlines in S’pore. Somehow, every piece of carry-on luggage could fit in the overhead, even though there were more passengers.

That term in US is not acceptable last couple of decades. Now they are called ‘flight attendants’.

Shall use “flight crew” subsequently.

My comment was no way to tell what term should you use – hey, SilkAir and others still use ‘stewardess’ in their job applications. It is just US thing… for some reason that term attained gender bias.

Aaron, is your Qatar flights going to be affected with UAE cutting ties with Qatar?

Yes. Very much so. Am monitoring the situation closely

It’d be interesting hearing from you what will the outcome be like. Has Qatar Airways contacted you already?

Would you have any idea how to book a flight with AA given that their website does not show Singapore as a country? Upon Singapore Credit Card selection, the site refers you to the original country/region selection but neither Singapore or Any relevant region is being offered.

Thank you for any suggestions you may have.