If this is SQ’s new Suites product…

As 2 November draws ever closer, the hype surrounding SQ’s new A380 cabin products has reached Al Capone’s vault levels. A lot of the buzz is around what the new Suites product will look like, given how Etihad has upped the stakes on what levels of luxury can be achieved within an aircraft cabin.

Earlier today I received a set of photos from an anonymous source (who, for the record, has no connection whatsoever with SIA), which purported to be leaked images of the new Suites product. I had originally decided to keep this under wraps because I imagine there’s a whole world of hurt awaiting whoever is behind these photos.

However, as the day went on the photos were reposted on SQTalk , Flyertalk and coverage started spreading on places like OMAAT and AusBT (quoting SQTalk and Flyertalk). Given that the photos are already in the public domain, I’ve decided they’ve become fair game for comment.

If anyone doubts I’m crediting sources properly, I’d like to point out that these images were sent to me just after lunch today, before any posts went up. And if you don’t believe that, the images I received are slightly different from the ones that have been posted on the forums. For example, in this shot of the cabin, you can clearly see the outline of the canvas on which the photo has been mounted…. 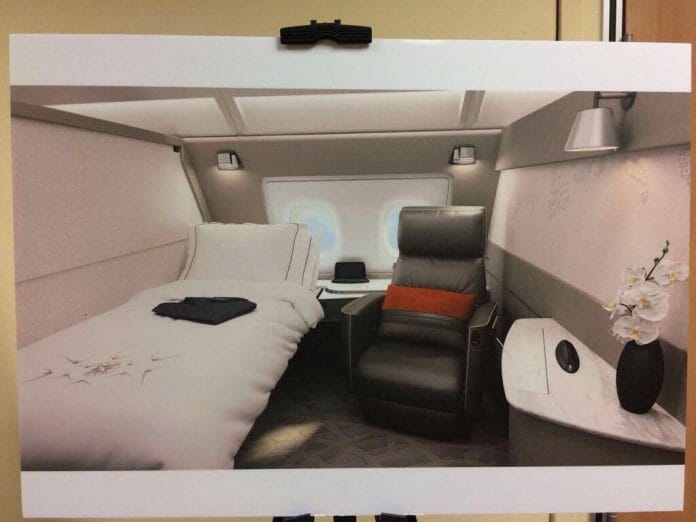 versus this one that went up on Flyertalk where the canvas has been cropped out.

I’m not going to speculate too much, given that these could still turn out to be hoaxes (although I’m more certain about these being the real deal than I was with the “leak” a little while back. Check out the SQ-branded QC25 headset in the armrest), but it seems that SQ has gone for a radically different approach with the new Suites, incorporating a separate bed and seat in something that looks like a mini-apartment. 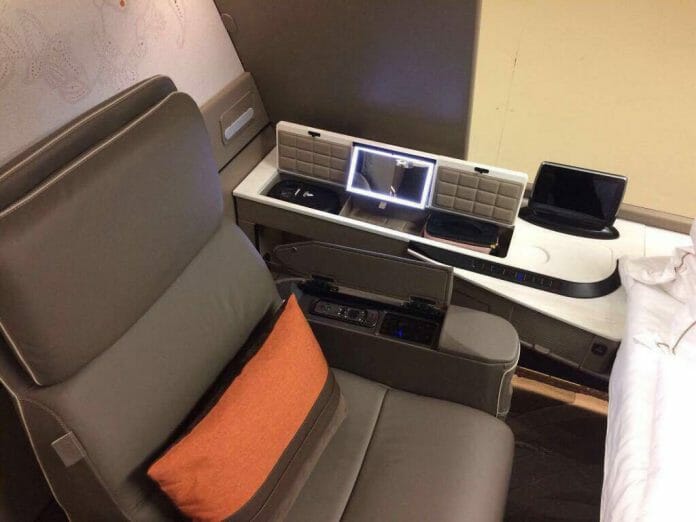 And yet, my honest first impression upon seeing the product was “meh”. 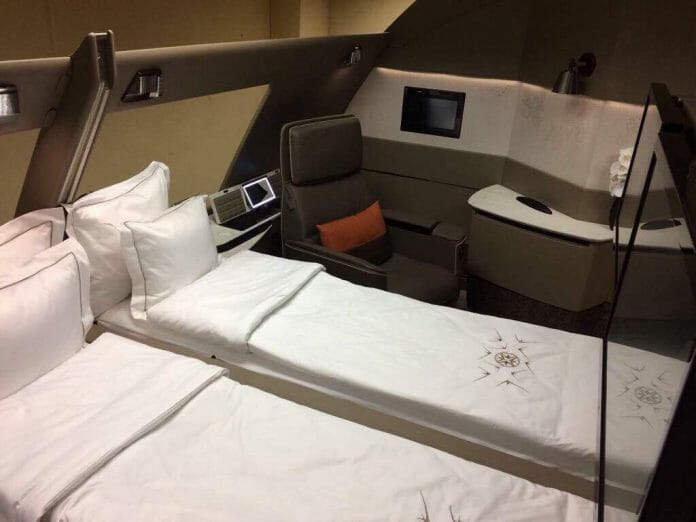 I can’t quite place my finger on what I dislike. Maybe it’s the choice of Premium Economy-esque seat colors and design. Perhaps it’s because there looks to be a ton of wasted space. Maybe it’s because there is a very visible gap between the two beds (which individually look to be very narrow) that means this won’t be a “true” double bed (just like the current A380 suites where there’s a very hard divider separating the two sides). Maybe it’s because I just expected so much more from SQ. 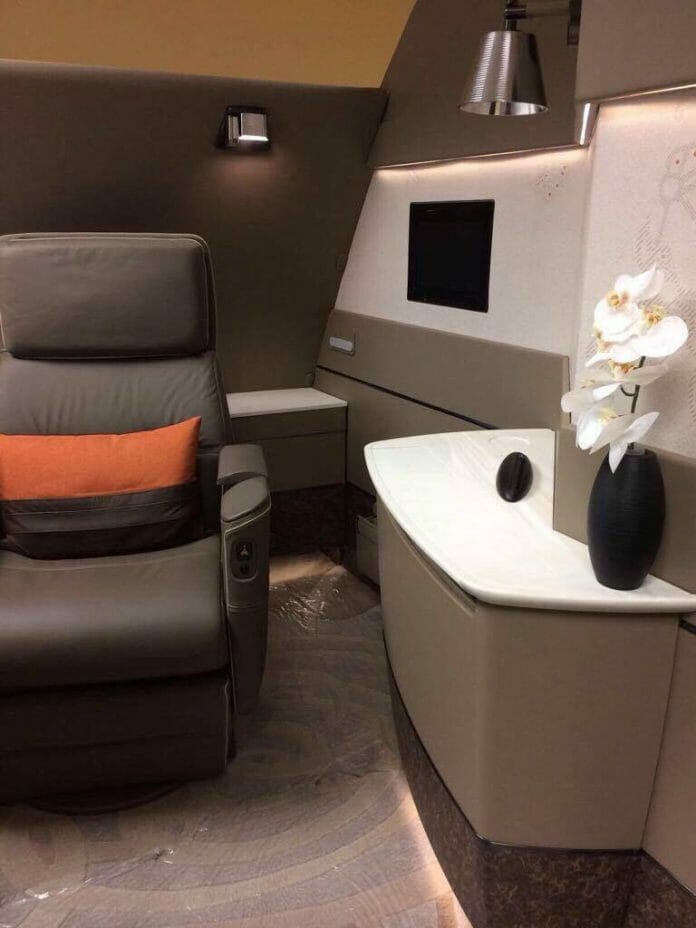 This design is a clear winner where sheer space is concerned- I don’t think there’ll be any First Class product that can compete with the amount of space a Suites passenger has here (unless Emirates proves me wrong…stay tuned for the Dubai Air Show). And perhaps the product, when revealed properly on 2 November with all the bells and whistles, will yet surprise me. But I’m not loving what I’m seeing right now.

Also provided to me was this seating chart that shows clearly the 6 Suites at the nose of the aircraft (note again how this image is different from the cropped one that has been posted to Flyertalk). Honestly, it was business class that caught my eye, because I’m wondering ever so slightly if those two seats in the center of business class could possibly become a Q-Suites style bed 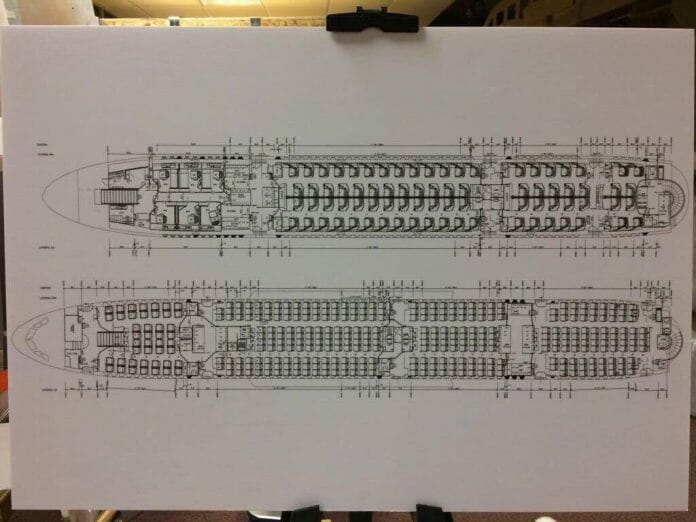 And since the cat’s out of the bag, here’s a bonus photo that I don’t think has gone up elsewhere. This is supposedly the design of the bathroom. I’ve always felt SQ’s bathrooms were a wasted opportunity for innovation (the one in the Suites section of the current A380 is cramped and unimpressive), and while it’s good to see a much larger bathroom with a vanity area, I’m not seeing anything that makes me go wow. Keep in mind, though, that we already knew SQ had ruled out showers for its A380s a long time back. 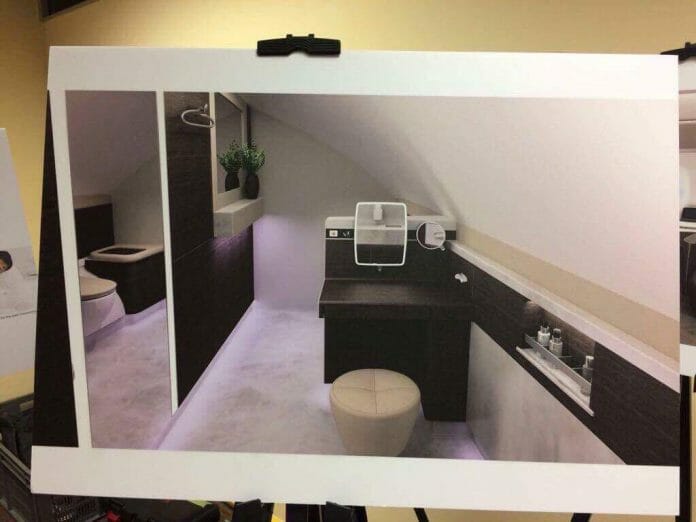 So, to summarise- in my heart I still really, really, really hope SQ proves me wrong and pulls a rabbit out of the hat on 2 November. Keep in mind we’ve seen nothing at all about business class (which, given that the new Suites will go to a 6 seater configuration will probably be a more realistic saver redemption option), much less premium economy and economy. We don’t know what the new IFE will look like. We have no idea about all the functionality that the Suite will have. There are a lot of unknowns right now, so the only solution is to wait for the official reveal.

Here are the details that David Flynn, AusBT editor, posted on Flyertalk for 2 November:

* invitation-only event being held at Singapore’s Suntec Convention Centre
* launch begins at 9.45am with opening address by SQ CEO, who will then unveil the new cabin products
* Q&A to follow through to 10.45am
* 10.45am onwards, media can crawl all over the new suites and seats

The chair there looks really underwhelming indeed. Not sure of its purpose…is it suppose to be a osim chair? What purpose does it serves?

The wasted space is indeed a shame…i fully agree that it really disappoints and definitely lacks the wow or X factor…..

My doctor friend remarked it looked more like the inside of a hospital ward. Class A, thankfully

Very underwhelming indeed – also got the premium economy feel….both the seat and bed look way too narrow. I somehow doubt this is the final product, especially since SQ has proved to be a master in innovative use of space and here spaces is wasted left, right and centre. Moreover, the side table is different in different pictures, sometimes seemingly the place where the tray table is stowed whilst in other pictures it doesn’t look like it holds the tray table. I am really hoping these are just WIP mockups. This is so far off the quality levels of previous… Read more »

Looks like the bed can be folded – if thats true, it’ll result in massive amount of space.

If it was shown to you months ago, I’m sure SQ had time to add the bells and whistles no?

The bed and recliner may be there, but it really feels lacking for a Suites product… I can understand the disappointment, if this is true.

this is great, fly long distances in a “suite” that resembles a working class person’s flat in hong kong. LUXURY

i’ll be the first to say that we should give SQ a chance to do the full product reveal tomorrow before passing judgment. However, I will also say that what we see in these photos alone lacks any sort of wow factor. the product is undoubtedly spacious with more room than I’ve ever seen in any aircraft (bar Etihad’s residence), but I’m praying that doesn’t turn out to be the only wow.

The launch is today no? i wonder how it looks like. Pretty underwhelming, feels kind of cheap instead

The first class looks more like an upgrade than revolutionary. Being able to convert the bus class to double bed sounds like a good idea!