Checking out the Flying Blue program for alternative award flights on SkyTeam.

Everyone reading this should know that getting an award seat on the flight you so wish to be on is much harder than winning a $2 Million Toto draw (Disclaimer : we do not condone monetary gambling, only award flight gambling). Snagging that prized seat on a prime time flight definitely deserves popping open of a bottle of champagne (Krug 2004 or Dom Perignon would of course be the champagne of choice).

However, more often than not, we’ll be staring and weeping at this screen when performing an award flight search :

The dreaded waitlist. Disrupting your grand plan to have a 15 day European holiday as you’re now forced to fly out of Singapore on an “off-peak” day such as Monday (or Sunday), thus shortening the time spend truly holidaying.

Heading over to Asia Miles, the situation is improved in a sense that well, there are still flights but they still get you into London at night , losing a day (this is for a Friday departure) : 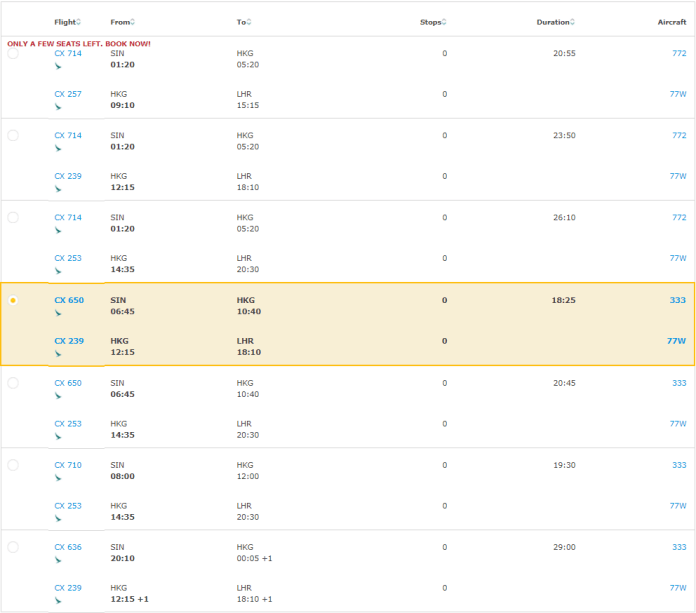 I won’t discuss much about the SkyTeam program in detail today but I’ll cover it in a separate post probably. Instead, let’s focus on award flights.

For us here in Singapore who don’t really accrue miles through flights on SkyTeam, you’d be glad to know that Citibank is a transfer partner to Garuda Indonesia Garuda Miles as well as Air France Flying Blue. They can be earned via the Citibank PremierMiles card, Citi Prestige as well as the Citibank Rewards card. (the latter 2 are earned in Citi Dollar)

For the purpose of this article, I’ll be basing my research off the Flying Blue program. Their search engine is actually quite easy to use, and shows flights from most if not all of their partner airlines. Interestingly, Copa Airlines, Malaysia Airlines and Japan Airlines flights can be redeemed via the Flying Blue program. However, this must be done via the phone through their agents. The miles requirement for a flight to Japan is rather high though. At 50,000 Flying Blue miles one-way. That’s an additional 7,000 miles compared to booking with Singapore Airlines.

While searching through Flying Blue for award flights for the purpose of this article, I’ve noticed that you will be assured of a seat on whichever date you choose at their Classic award level, which is supposed to be on par with SQ’s Saver reward tier. 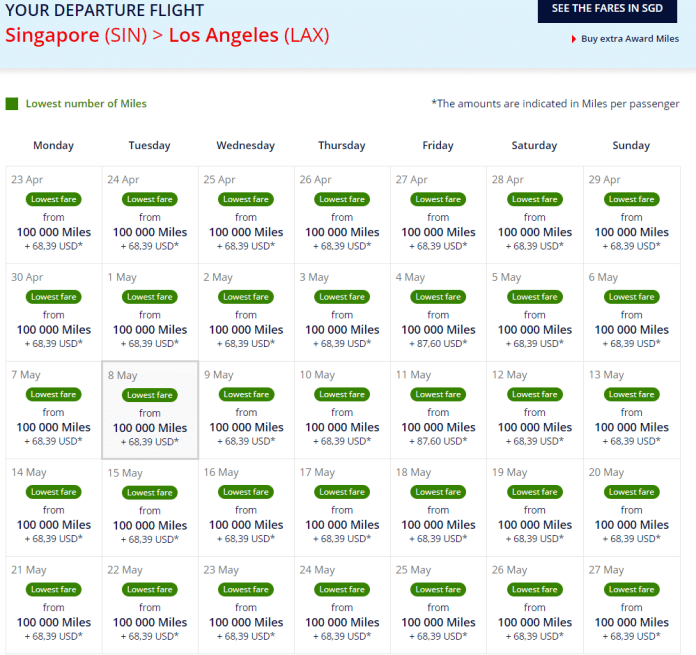 I’ve compiled a short list below of common routes that are always in high demand (mainly long haul) comparing the 3 different frequent flyer programs from the 3 alliances. Note that the figures represent a Business Class redemption.

Note for Flying Blue, they generally charge a flat rate of 100,000 miles for a one-way redemption on Business for a long haul flight (i.e Asia to Europe, Asia to USA). Taxes are relatively affordable as well and varies by carrier. China Airlines charges quite low taxes from New York :

While if you were to fly with China Eastern for instance, the taxes paid is quite a big jump :

Also, if you did not get the chance to book yourself on a flight during Garuda’s 90% off promotion, you can route via Jakarta to fly to Amsterdam (although yes, they do fly 3X a week to Amsterdam via SIN) to try out their Business Class on their 777-300ER. I’ve personally flown it and can declare that it’s a decent product, for both the hard and soft product. Their oxtail soup was awesome. 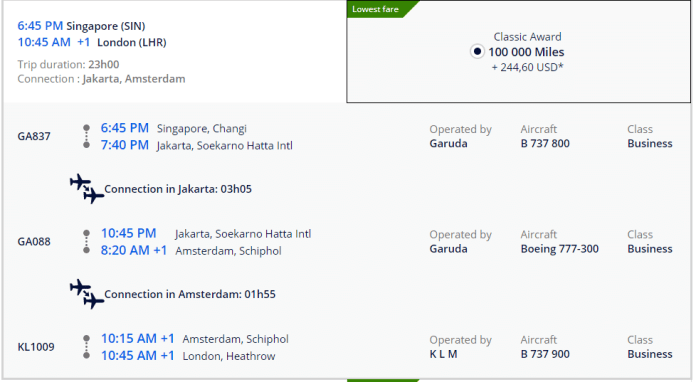 Worth paying the premium?

Seeing that the cost for redeeming miles through the Flying Blue program is much higher than both KrisFlyer and Asia Miles, I think some value can still be found. For starters, you’ll know that on whichever date you choose, there would definitely be award space bookable online. If you’re flying on peak period, forking out the extra miles to guarantee yourself a redemption seat doesn’t sound all too bad.

“China Airlines? You gotta be kidding me”.

Recently, the chinese airlines have been upping their game. China Airlines 777-300ER which flies mainly to the US out of Taipei, features a sexy Business Class cabin. 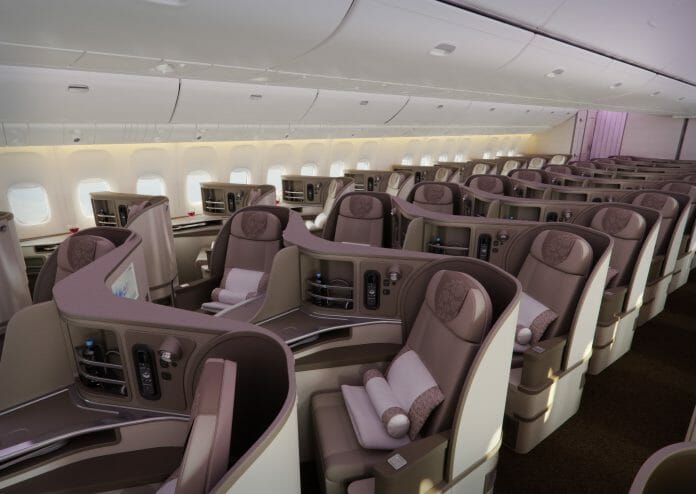 They are using the reverse herringbone seats, similar to that on Cathay Pacific and Eva Air. Ben from One Mile At A Time had some good things to say about his flight on China Airlines. I mean, check out the snack bar, beautiful :

Also, if you’ve been wanting to try out Delta Airlines new Delta One suites on their A350 aircraft, you could do so from Amsterdam to Detroit. That would set you back another 62,500 miles one-way.

Although the redemption of miles on Flying Blue costs more than both KrisFlyer and Asia Miles, there is an assurance that comes from searching for space with SkyTeam while knowing you’re almost guaranteed an award seat on the preferred day that you’ve chosen to fly on. Also, you would also get to try other great hard and soft products instead of the mundane products of SQ and CX most of the time.

Matthew Chong
Addicted to luxury travel while trying not to go broke, Matthew is always on the prowl for the best deals in the travel industry. When he's not busy studying, he can be found trawling the internet and reading up on credit cards, airlines and hotels. He also wouldn't mind taking you out on a date.
Previous articleTargeted: OCBC Titanium Rewards 4 mpd dining promotion
Next articleWould you pay the full service premium?

Do people these days react as you did in this article when they hear about China Airlines? Granted it did suffer a spate of fatal accidents in the past, and clearly you weren’t referring to her notorious safety record but her hard product. While EVA Air (her closest competitor) appears to be the preferred airline among frequent flyers, China Airlines’ hard product, much less her service, has ever been a major point of derision in recent times. The only reason I could think of for such disdain is the confusion with airlines from China, particularly Air China. Some assume they… Read more »

hey Nick, I was coming from a product POV.
and yes sadly people still get confused between China Airlines and Air China sometimes.

looks like matthew couldn’t be bothered to read up about China Airlines. They fly out of Taipei because it’s a Taiwanese airlines. Way to go lumping them together with airlines from the PRC

I also did mention it in the article.
“Recently, the chinese airlines have been upping their game. China Airlines 777-300ER which flies mainly to the US out of Taipei, features a sexy Business Class cabin.”

Not quite sure where you gathered that I didn’t know that.

I think it probably from this line:
“Recently, the chinese airlines have been upping their game. ”

Presumably, and understandably, some people definition on “Chinese” could be different.

Many understand “Chinese” as a nationality instead of “ethnicity “.

I hope most readers here are for traveling fun, not for any political debate. Don’t be sensitive, guys

A Taiwanese airline is not a Chinese airline. This has nothing to do with sensitivity. This is a simple fact.

If you want to be taken seriously, get your facts straight.

what Ding said. We’re here to talk about miles, which know no geopolitical boundaries. Let’s give each other the benefit of the doubt where loose language is concerned, agree it’s unintentional and move on.

of course, if you find an error in calculations…

I don’t have to be Taiwanese to be miffed at the fact that ML has chosen to label China Airlines as a PRC carrier.

There is nothing geopolitical here. I’m asking for FACTUAL writing.

Just because this isn’t about miles per se doesn’t mean you can go all Donald Trump when it comes to simple facts.

And I am a Singaporean who gets equally annoyed when people confuse us as a Chinese Province.

China Airlines is not a Chinese airline. It’s a Taiwanese Airline. Please get that straight. Taiwan =/= China.

Is Singapore Airlines a Chinese Airline that operates out of Singapore on the basis that a majority of their employees are Chinese?

Unless you’re a PRC shill, then carry on.

Jonathan, I guess u r Taiwanese so I would understand ur overreacting. But pls take it easy, this is just a good post about miles, not about any other facts

Tbh aside from politics, from a stylistic pov I did think he was implying that China Airlines is a prc carrier. It is the context. There have been so many horror stories about mainland airlines, that’s why many readers would make that connection from “i know what you are thinking”.

Hi Aaron, I know that Matthew has unintentionally aggravated many here, but the fact lies that he needs a better touch in writing like how you, Louis and Fred writes which purely talks about air travel and it’s experience. With your guidance he would be a better writer but for now your guidance shall be called upon.

As long as you don’t go with Delta SkyPesos- err, SkyMiles…