Malaysia Airlines is offering good priced business class fares ex-BKK, if you're willing to position yourself.

Of course, the trade off is whether you’re willing to (1) position yourself to Bangkok and (2) make the extra connection in KUL. If you snag one of these deals, you will end up flying SIN-BKK-KUL-DESTINATION-KUL-BKK-SIN. So you’ll need to factor the round trip cost of a ticket to Bangkok plus extra time into your equation.

That said, if you’ve got a lot of time on your hands there is some good value to be had. Tickets need to be booked by 25 March 2018 and flown between 12 March 2018 and 30 November 2018. Here’s the 55 destinations that are on sale ex-Bangkok this time round: 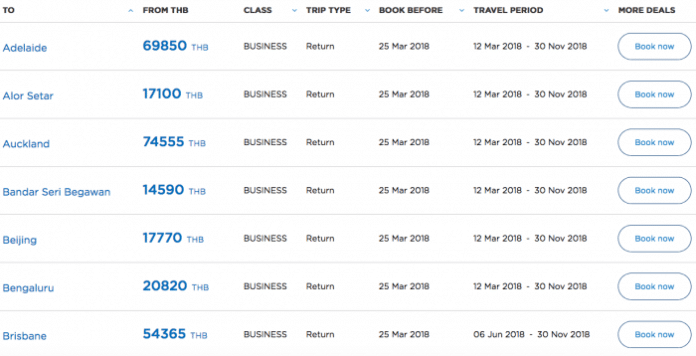 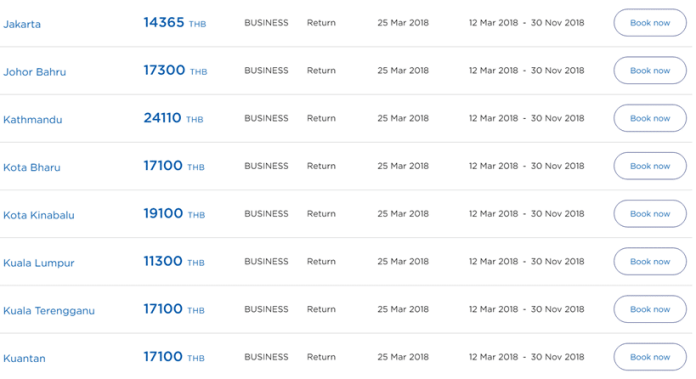 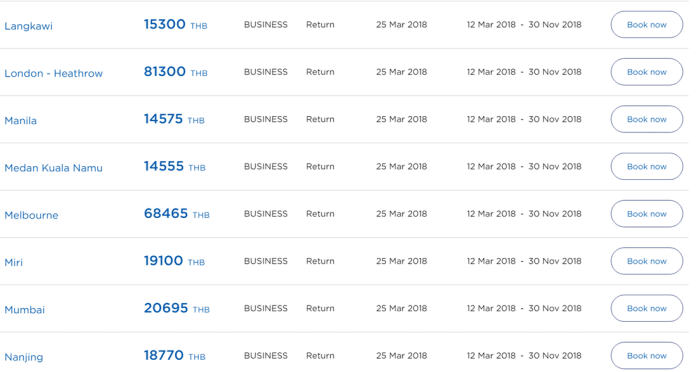 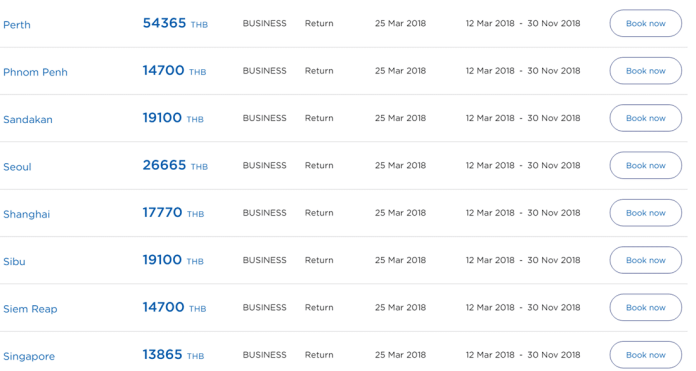 Some highlights for me would be (round trip prices shown)

It’s hard for me to recommend any Australian destination as it doesn’t really make sense to fly up North and then double back down South. I remember back in late 2016 when MH was really bleeding you could do round trip business to Tokyo at about S$800 which was a phenomenal deal. Too bad that doesn’t exist anymore, but Beijing and Shanghai seem to be excellent value at sub S$750.

A reminder that MH has finished outfitting its entire A330 fleet with its new full flat business class, which I reviewed about a year back and found to be very decent. You can find this on most medium haul routes such as Sydney, Beijing, Shanghai, Seoul and Tokyo. You’ll find the same business class product on their A350s

Only certain seats have unimpeded aisle access though, so if you’re booking you’ll want to be sure to snag a throne seat (1K, 4K and 6K)

Malaysia Airlines has just opened their new lounge in KUL, which I hope is a step up from the dismal temporary facility they were using not too long ago. I’ll be looking to review it in May when I pass through en route from Tokyo back to Singapore.

If you’re booking one of these fares, I’d strongly advise you not to credit the miles to Enrich. Enrich was gutted some time back and now offers “dynamically priced” (i.e. revenue-based) award redemptions, which increase whenever the revenue fare increases. You’d be much better off putting these miles in Asiamiles, or using them to earn tier status with British Airways Executive Club.

MH is also getting a bunch of A330-200 planes, which will be deployed on medium haul routes . KUL-DEL is one of these routes. They also have flat bed business class seats, but I think a bit different from those in the A330-300 and A350.

anyone know if we are able to book such an itinerary, then fly directly back to sg from KL on the return leg, for example

no, these fares will not be valid for open jaws

i believe he meant that on the return leg destination-kul-bkk, he does not complete the kul-bkk flight and instead get out of kul custom and take his own connection back to sg from there. but i reckon that may be possible only if he does not have any checked in baggage.

ah. yeah, you can’t short check your bags. i guess you could do that…but things might get complicated in the event of IRROPS so I’d urge caution

thanks so much, apologies for the lack of clarity in my initial query! didn’t know i couldn’t short check my bags!

You can “make” a few days stopover in KUL before “going ” to BKK, buy one MH ticket for KUL-SIN for the same day and tell the check-in staff in SYD or any other city that you want check your bag to SIN, if they don’t allow, just check your bag to KUL then clear immigration/custom and then check-in for KUL-SIN sector. Just make sure you have enough time to recheck-in. The fare allows up to 4 stopovers at THB1500 each

No need to reposition to BKK. MH fare sale from Singapore now on until 31 March 2018.

Hi Aaron! The 1st time I read your blog was about 1.5 years ago (Oct. 2016) on the very same topic – there was an amazing MH J fares promo ex-HKT & u wrote about it. I immediately pounced on it & snagged a trip to LHR for …. wait for it … B42,000 which is 1/2 of what is on offer now. This round of ex-BKK fares isn’t spectacular, and like another reader mentioned, the sale fares for exSIN are available till 31/3 & the ex-KUL fares were pretty awesome too. Did u have a look thru the ex-KUL… Read more »

yes! ex KUL fares can sometimes be good value too. I spotted Shanghai return business class fares for only S$673 all in for november. i should do up a post on city positioning within SEA for cheaper premium fare deals…

drop by the next ML meetup! we’ll announce soon