“Well,” I thought to myself. “KUL is the home base of MAS, so I fancy their lounge there will be worth a trip report. Better budget more time for it.”

So I did. And that meant less time upfront in Singapore, which I at the time dismissed as unimportant because who wants to hang out at the SATS Premier lounge anyway. Doh. 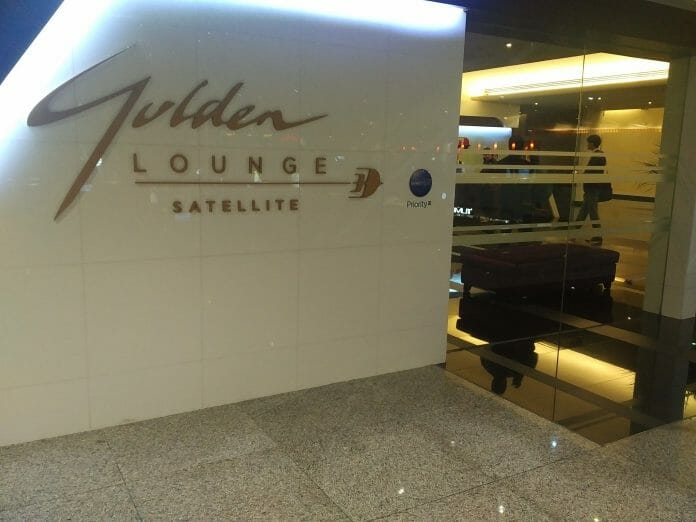 After disembarkation I took the inter terminal train to the MAS Satellite lounge, which is the main lounge in use while the rest of the lounges undergo upgrades. 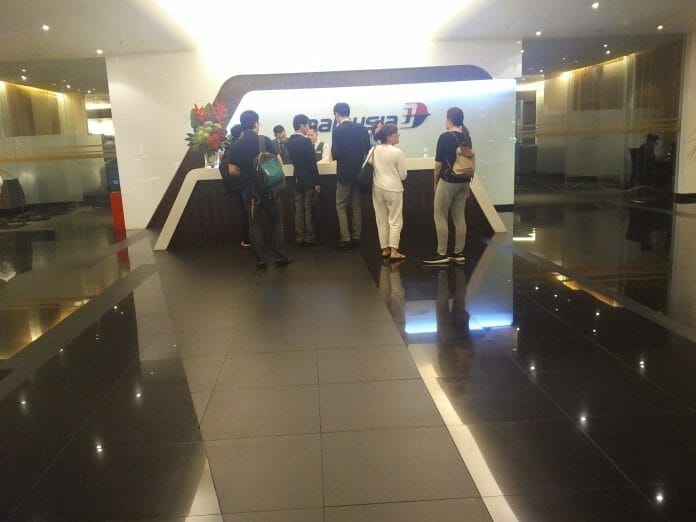 The layout of the lounge is a little strange. If you turn left after reception, you’re headed towards the business class section, where you’ll find a bar just outside the business class lounge (turning right takes you to the first class lounge; if you’re interested in seeing what that looks like Lucky has reviewed it here) 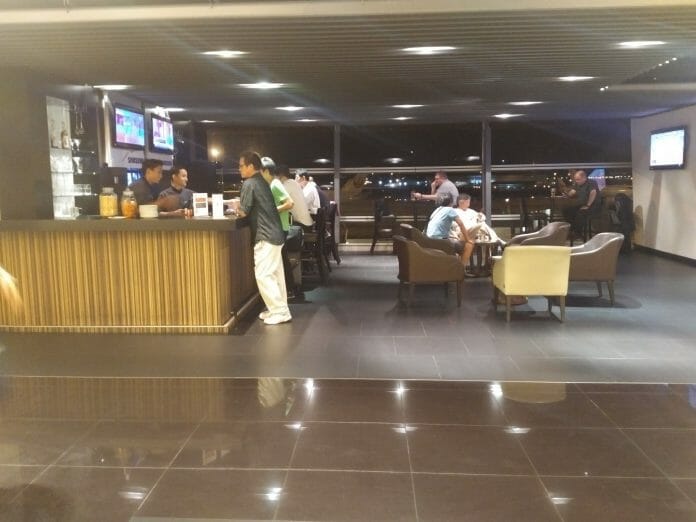 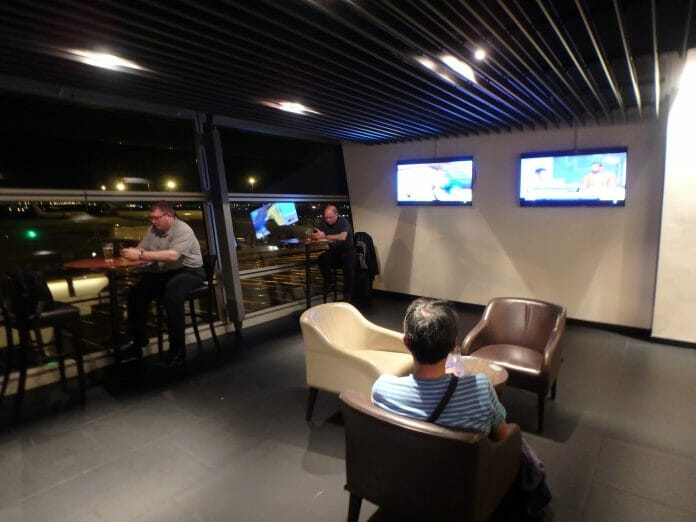 It’s only after you pass the bar that you get to the lounge entrance proper. The lounge was packed to the brim when I got there, which wasn’t surprising given that evening time was peak departure period for MAS’s widebody aircraft.

If I had one overall comment about the lounge, it’d be “makeshift”. It seemed like this whole place had been repurposed very quickly to build a lounge. All the furniture was movable; there were very few permanent fixtures. The carpet was loose in a few places, like it had been stuck onto the floor. The weird placement of the bar outside the lounge also suggested that they didn’t want to make structural modifications to the space they had. 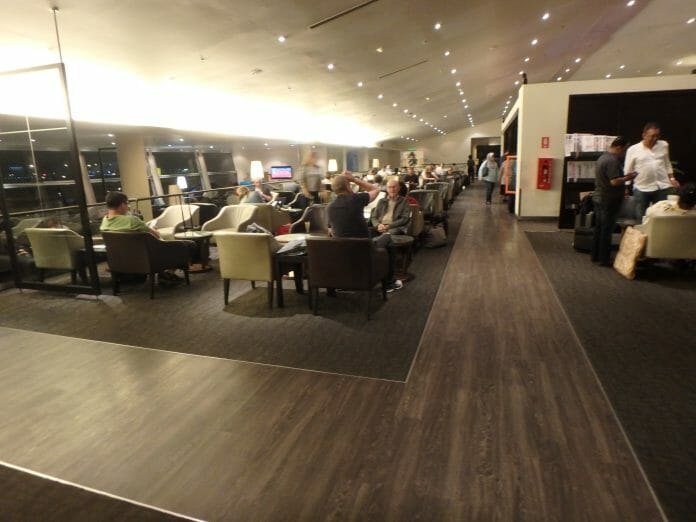 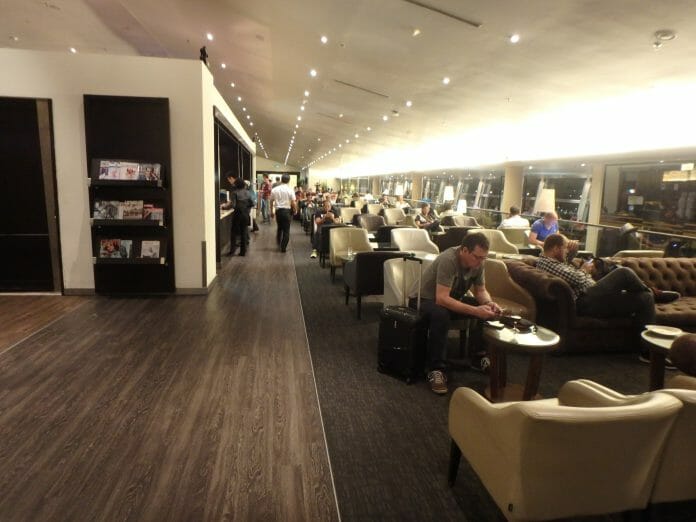 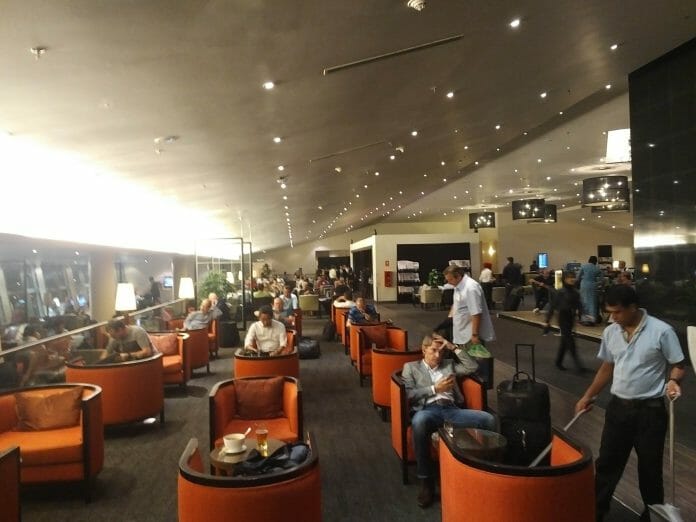 The other thing you’ll notice about the lounge is that it doesn’t seem to be segmented into any particular activity areas. In other lounges, you’ll find dedicated areas for dining, for resting, for watching TV etc. Here was one big room where everything seemed to be everywhere. And yet not all the food is here. The platform is where you can order one of two freshly prepared dishes- laksa or chicken wanton noodles. 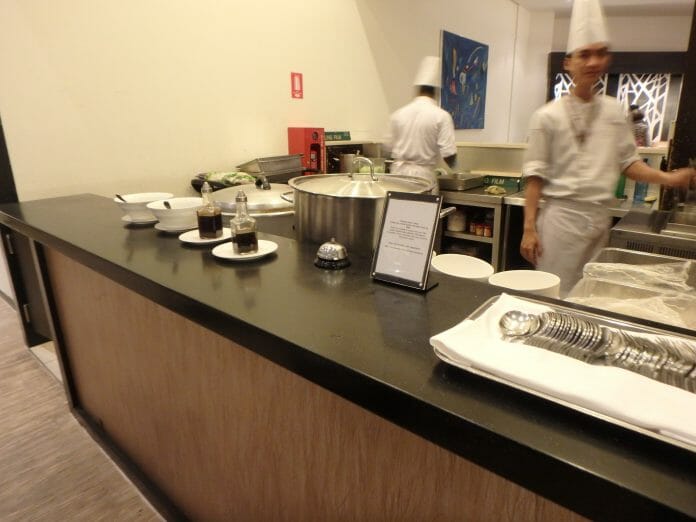 There is also a coffee machine with a professional barista. 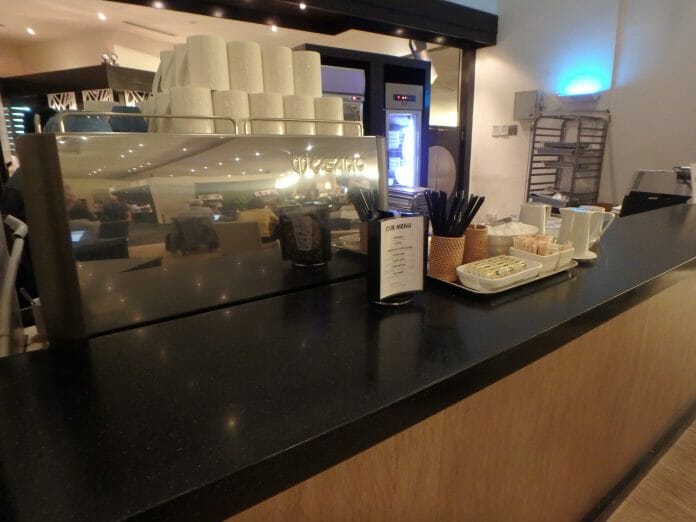 But the rest of the buffet is on the other side of the lounge, away from the platform. Here’s where you find the pre-cooked items. 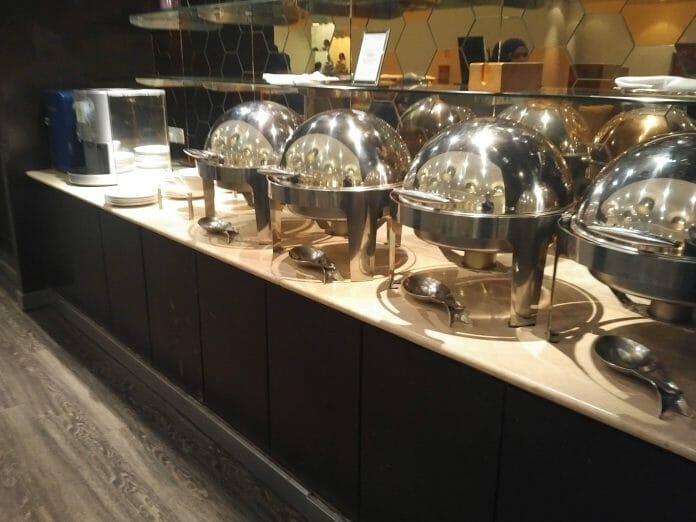 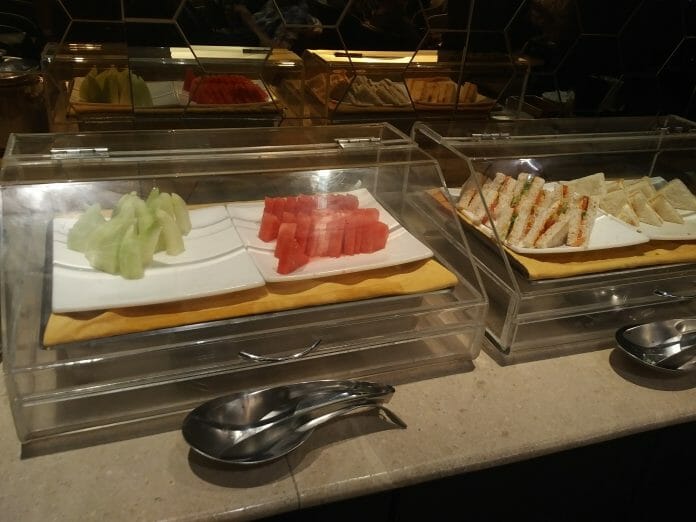 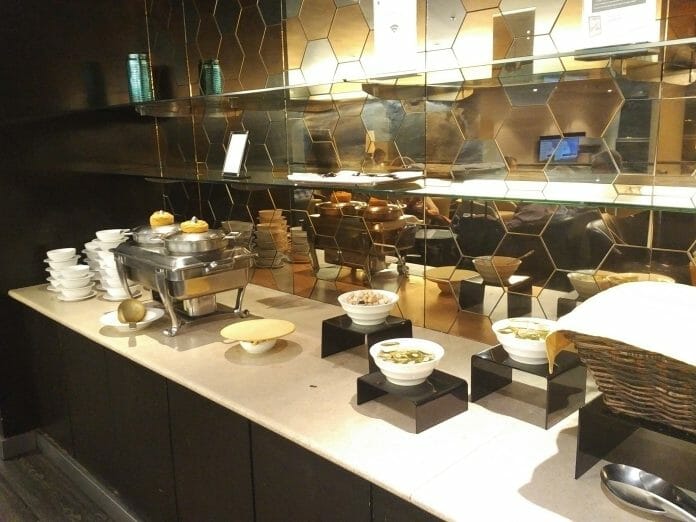 I managed to get a seat on the platform. Here’s another angle showing you what the layout of the lounge was like. On the left at the rear of the photo you can see where the other buffet items were. 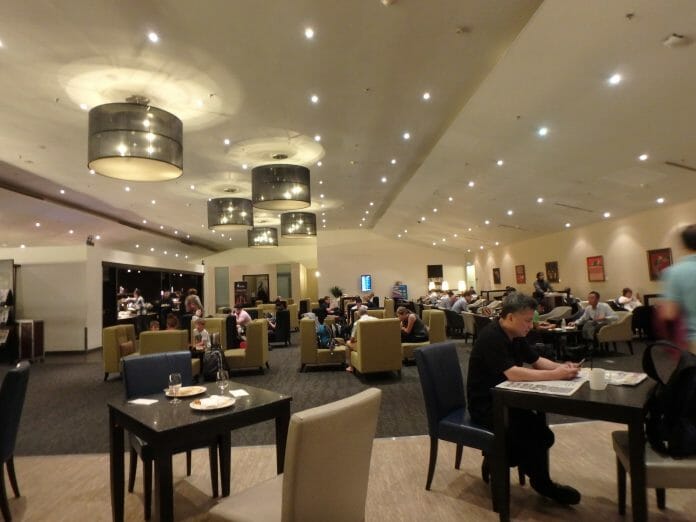 On the platform I ordered the wanton noodles, which were really average. The wantons were still hard inside, like they hadn’t been cooked through. The broth was tasteless. 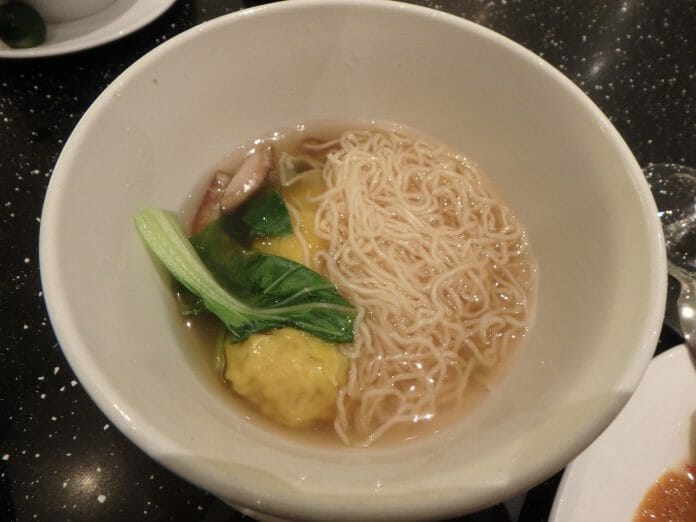 I also had a bowl of very watery, forgettable laksa. This was assam laksa, a different style to the one I had in the Singapore lounges, but way inferior. 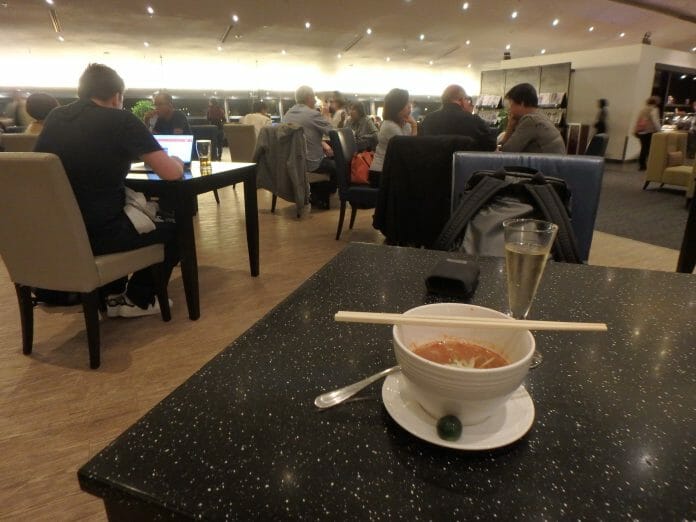 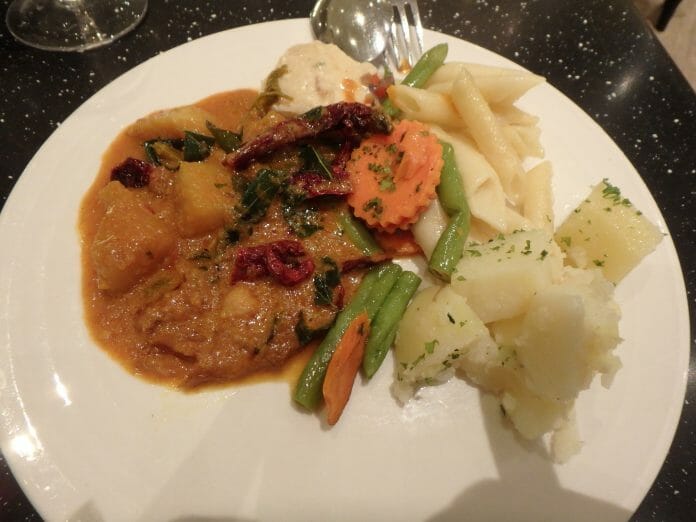 The lounge continued filling up as the evening went on. The acoustics of the room meant that any noise was echoed back by the ceiling, so in no time at all it got really loud. 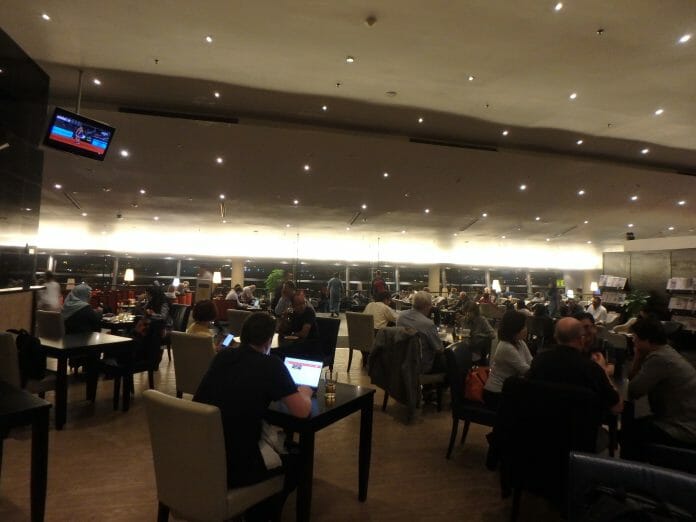 I tried to seek out a quieter area, and discovered that there’s a spa located in a dark corner of the lounge. However, treatments are not complimentary. 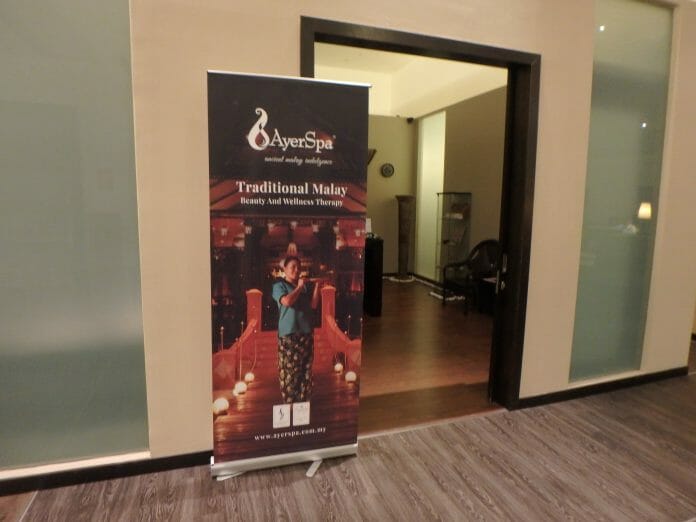 I soon realised the quietest place to be was actually outside the lounge, at the bar. 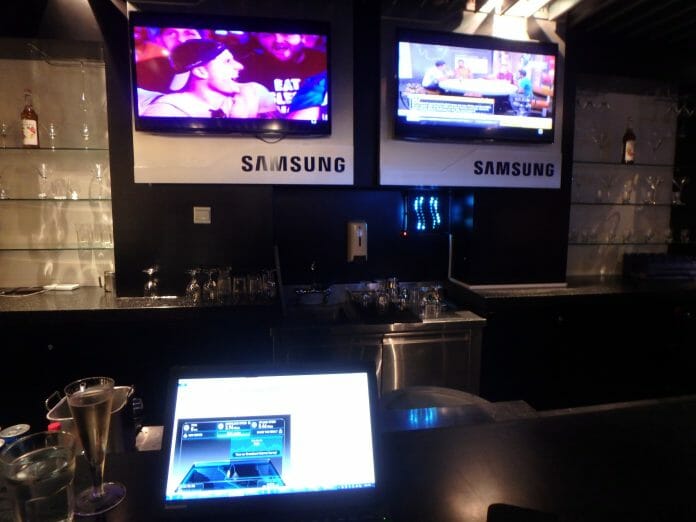 The bartender poured me a glass of sparkling wine (they don’t serve champagne in this lounge) and I tried to get some work done, only to find that the internet was nigh-on unusable. 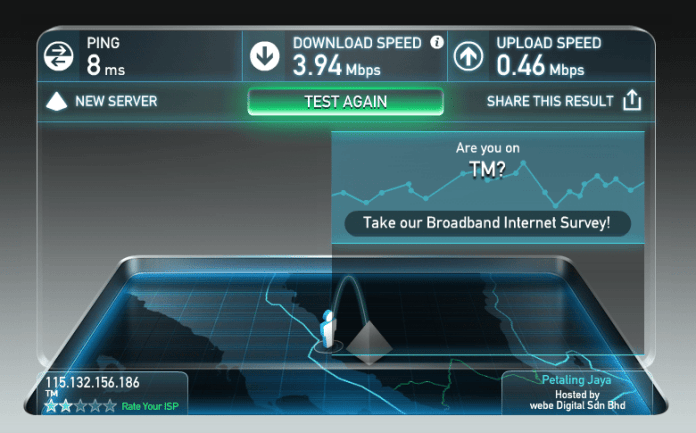 Afterwards, I wanted to use a shower room so I re-entered the lounge and walked up to the counter, only to be told that no showers were available. Plus, there was this beauty of a sign on the desk. 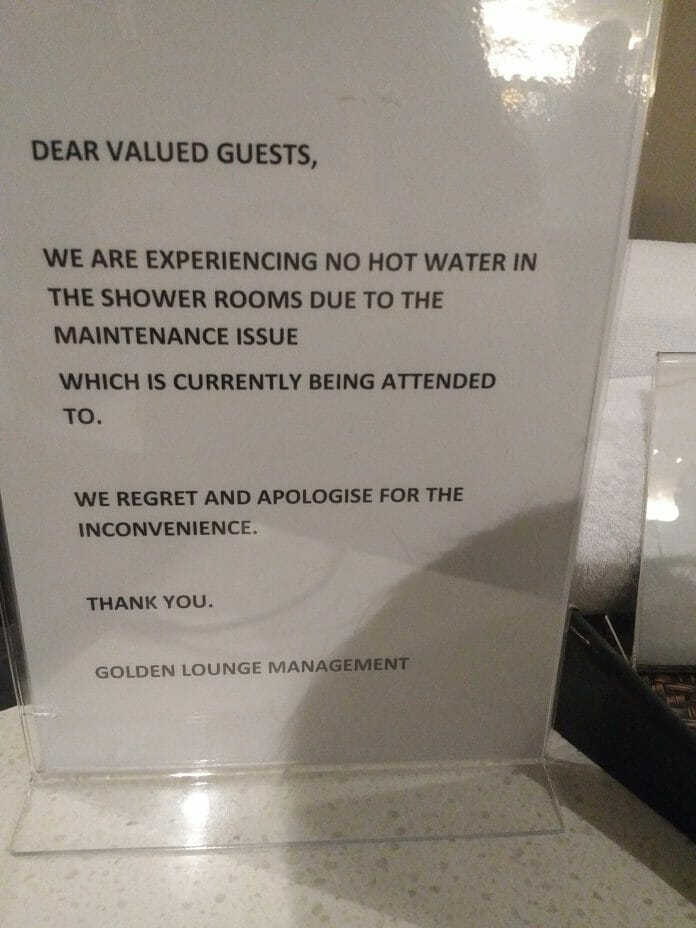 I still wanted to get a shower, if only to take photos of the shower room. Hot water is so overrated anyway. So I asked the attendant if I could put my name on the waiting list.

“Then how will I know when it’s my turn?”

“Oh, you sit close by relax a while. I call you when ready.”

I tried to explain to her it might make more logical sense if they took down people’s names so they at least had some idea of who came first, but she was having none of it. Another gentleman who arrived slightly after me got the same response.

While other lounges use electronic pagers to queue people when all the shower rooms are full, it seems that the MAS staff adopted a more laissez-faire approach

It wasn’t only the showers that weren’t working properly. Throughout the lounge I saw signs like this 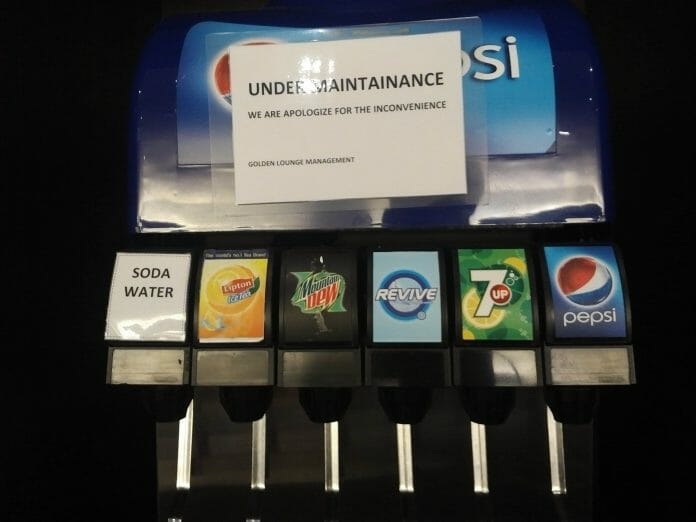 Which suggest that this lounge is in desperate need of more TLC from management if it’s to be MAS’s flagship.

I’m glad to know that MAS is planning to update its satellite lounge, with completion targeted for mid 2017. Because the current offerings are really disappointing and do a big disservice to the MAS brand.

The MAS lounge, in a way, might be a microcosm for Malaysia itself. The people are friendly and well-meaning, but they’re let down by a lack of the right structures and processes to really bring out all they have to offer.

So MAS lounge- big disappointment. Fortunately, it was now time to get on my first ever MAS A330 flight, and as you’ll see, their hard product has really gone places.

i think they also stuck the same “under maintenance” signs on the missing MH370 engines. OHHHHHHHHHHHHHHH

Any idea why you did not patronize the CX or JL lounge instead? Much quieter and the food marginally better. Internet connection thus is better as well due to the lesser crowd. MH lounge is a nightmare.. but I like their cappuccino…somehow it taste v good compared to other food offerings.

because i didn’t realise it was still open when i touched down. ahhh, see what happens when you don’t research these things properly.

Ah ic. No worry I can understand cos you are not a OW chap. For me who always like to position in Kul/Bkk/ Tpe for cheap OW j fares, imperative to know e klia inside out.
Looking forward to e rest of your trip reports!

on the other hand, i’ve been obsessively researching the rest of the airports i’m going to to make sure something similar doesn’t happen. one particular one caught my eye-LHR. I know QR has a good lounge in T4, but unfortunately I’m flying BA from T5. As per my research it’s not really practical to hop between terminals because you need to take a bus, but do correct me if i’m wrong.

I had the same impression when I used that lounge in early April… it wasn’t that bad, just disappointing. Any run-of-the-mill Priority Pass lounge would have been better.

KUL airport was a let down for me as well, nothing interesting to do, eat or shop for.

i know right. major let down for me, and there wasn’t an awful lot to do in KUL. I don’t know why it ranks so highly on those airport rankings.

99% of the time I transit via Singapore and as a Qantas Platinum FF (oneworld Emerald) fly either with Qantas or J* and always head straight to the Qantas SIN lounge – the downside to this is that I am stuck on either a 737 or A320 from Perth and 5 hours is a pushing it on a single aisle aircraft for me. I thought i would try MAS as they fly A330’s from Perth and are part of oneworld (successfuly bid for a business upgrade on the way out and really liked the new seats and chef on call).… Read more »