UOB PRVI Miles is offering a 10,000 miles sign up bonus, but don’t get too excited

Limited to first 2,000 customers who spend S$6,000 in 3 months. And no, there's no way of knowing beforehand if you qualified.

The UOB PRVI Miles card recently cut its income requirement to $30,000 across the Visa, Mastercard and AMEX versions, making it accessible to anyone who qualifies for a credit card in Singapore.

Its earn rate of 1.4 mpd for local spending and 2.4 mpd for overseas spending makes it one of the highest earning general spend cards in Singapore, and assuming you can live with UOB’s rounding policy and 3.25% foreign currency exchange fee (one of the highest in the market), makes a good addition to your wallet.

For the past few months, UOB has been running an $80 cashback promotion for new PRVI Miles cardholders. That’s been replaced from 5 May with a new 10,000 welcome mile bonus for cardholders who spend S$6,000 within 3 months of card approval.

But with UOB being UOB, things aren’t that straightforward. This promotion is only available to the first 2,000 spenders who enroll via SMS and hit the qualifying spend. So in other words, you could do everything right and find out at the end of the period that you simply weren’t among the first 2,000 to do so. It’s the risk you take when you deal with UOB promotions.

The 2,000 spenders are split into two batches of 1,000, each with their own qualifying period:

The safest way of getting your 10,000 bonus miles would be to sign up just as the qualifying period starts and spend $6,000 in a day. Which is kind of silly, but well…

Existing UOB PRVI Miles cardholders (defined as those who hold the card now, or within the last 6 months) are not eligible for the promotion. If you hold a different UOB card you can take part in this promotion, but your bonus is a much more meager 2,000 miles, with the same spending requirement. Have a read of the full T&C here.

Can I just point out one more thing that bugs me about how UOB markets this card? This: 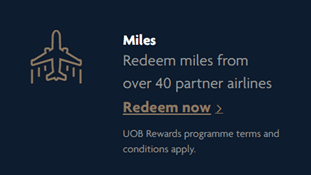 It’s not accurate to say that you can redeem “miles” from over 40 partner airlines. UNI$ only transfer to KrisFlyer and Asia Miles. I get how they get the 40 airline figure- they’re saying that if you transfer to KrisFlyer you can redeem your miles on other Star Alliance carriers, and likewise for Asia Miles and oneworld, and together that’s more than 40 airlines. But what they should be saying is that you can redeem “flights” from over 40 partner airlines. Probably nitpicking on my part, but still.

A reminder that UOB’s very excellent PRVI Pay facility is still alive and well and available to cardholders of any version of the PRVI Miles card. This lets you buy unlimited miles at 2 cents each, which is useful for topping off your mileage balance for an award.

Which of these 11 credit card sign-up bonuses should you take?

Citi Prestige limo rides can no longer be carried forward

Why does Singapore have all these ridiculous T&Cs??! This is insane! I don’t think any other developed country has anything as restrictive.

Nothing to be impressed about. UOB already have subpar products yet they still behave as though the are premium to others. Very Scott Kirby and Alex Cruz in the way they do things.

They all have a common theme. They deliver… to shareholders.
Just look at their bottomlines. Its a shame that profits can be generated at consumer’s confusion and cost.

i wouldn’t call the PRVI Miles card a subpar product in and of itself. objectively speaking it’s one of the best general spending cards on the market, just hamstrung by uob’s promotional quirks

The miles to over 40 partner airlines point is not nitpicking. They are misleading. UOB has a record for being loose with the truth and they should be called out for it. Shameless really.

Hi all, I would like to take this opportunity to share my recent horrific experience with UOB. I charged $17k in hospital bill to my PRVI miles card and was awarded uni$. The bill was subsequently picked up by my insurer and refunded. Prior to that, I called UOB call centre to transfer the miles to Krisflyer. I was also advised by the CSO that UOB will NOT claw back the uni$ even if the transaction gets refunded and there will not be a negative uni$ balance as long as I cancel my card prior to that. So, I did… Read more »

Money was refunded to your card, why would UOB let you keep the UNI$?