You'd think spending $150,000 in two months would guarantee you something.

Lord Barrington Wealthyhouse The Third, Esq. luxuriated in his penthouse with a cup of Earl Grey in his hand as he stared disdainfully at unwashed masses in the streets below. “It’s good to own land,” he said to himself.

A working-class knock sounded from the door. It was his butler.

“Thank you Jeeves, and do try not to breathe on me in the future,” Lord Barrington said as he gingerly extracted the items from the gloved hand, careful to avoid any direct contact.

“Very good, sir,” said Jeeves as he working-classedly withdrew from the room and closed the doors behind him.

Lord Barrington wiped his hands on his ruff and opened the envelope with a diamond-encrusted letter opener. An embossed card lay within: 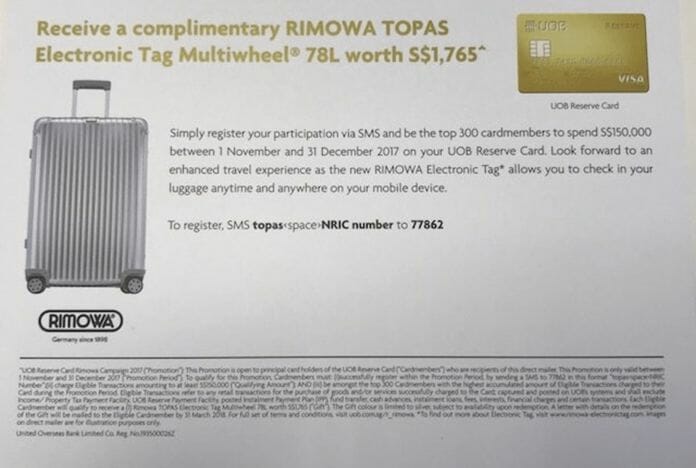 It was a communique addressed to UOB Reserve cardholders. Lord Barrington was indeed a card-carrying member, having received one for depositing two million dollars in ye olde bank of UOB the last time he cashed in the spare change he found beneath the fainting couch.

Aha, an opportunity to win a steamer trunk from Bavaria! He donned his monocle and started reading:

Well, that was certainly confusing. Did they mean “first”? Or had UOB invented a shadow system of currency where one person’s $150,000 spending counted more than another person’s $150,000? “That would be a capital idea!” he said aloud to his hunting trophies, hoping they’d appreciate his wry sense of humor. They did not.

He put a monocle on his monocle and read on.

Spending $150,000 within two months was no problem for Lord Barrington, who was on the morrow expecting a shipment of a hundred indentured servants. And also buying a $149,999 emerald scepter.

But his soul was disquieted within by the thought that spending $150,000 did by no means guarantee him anything. What if that infernal Lady Wealthierhouse and her 299 vile cousins outspent him? He’d never be able to live that down at the masquerade ball. Come to think of it, there was no way of knowing ex-ante (using Latin terms made Lord Barrington get feelings most sensual in his pantaloons) whether he was, indeed, within the top 300 spenders.

“If I spend 150,000 doubloons with the bankers’ guild, surely I should be guaranteed some recompense instead of having to cross my fingers and hope like a common harlot!” he said as he swooned onto the fainting couch with rage. After all, even if the trunk were procured at face value (which he doubted), a $1,765 gift off a $150,000 spend represented a mere 1.2% rebate, something you’d think they could offer to everyone paying a $3,852 annual fee and parking $2M with the bank.

Lord Barrington used the card for kindling. Who needed a steamer trunk when you owned land?

“He put a monocle on his monocle and read on.”

In the first place, this electronic luggage tag touted only works with 4 miserable airlines. If flying on SQ, too bad…

Too funny. Keep it up.

haha funny! thanks for the sunday pick me up 🙂

This is absolutely hilarious!

Hahaha. Laughing at the Milelion for his ingenuity and at UOB for its idiocrasy.

Is it weird that I read this whole article in a British accent?

Awesome write up. Keep up the good work!

who is in charge of marketing at UOB – i will not send my children to the same university or allow them to work for the same companies they did previously.

when UOB marketing sit down to plan out their marketing strategy, who is the smart a$s who proposes to have deceiving campaigns where they will certainly offend their clients . This very campaign sets out to disappoint their highest spending clients – genius move.

I bet the ladies line up after having a dose of your humour, good sir?

I am in high demand.

Such a great article!